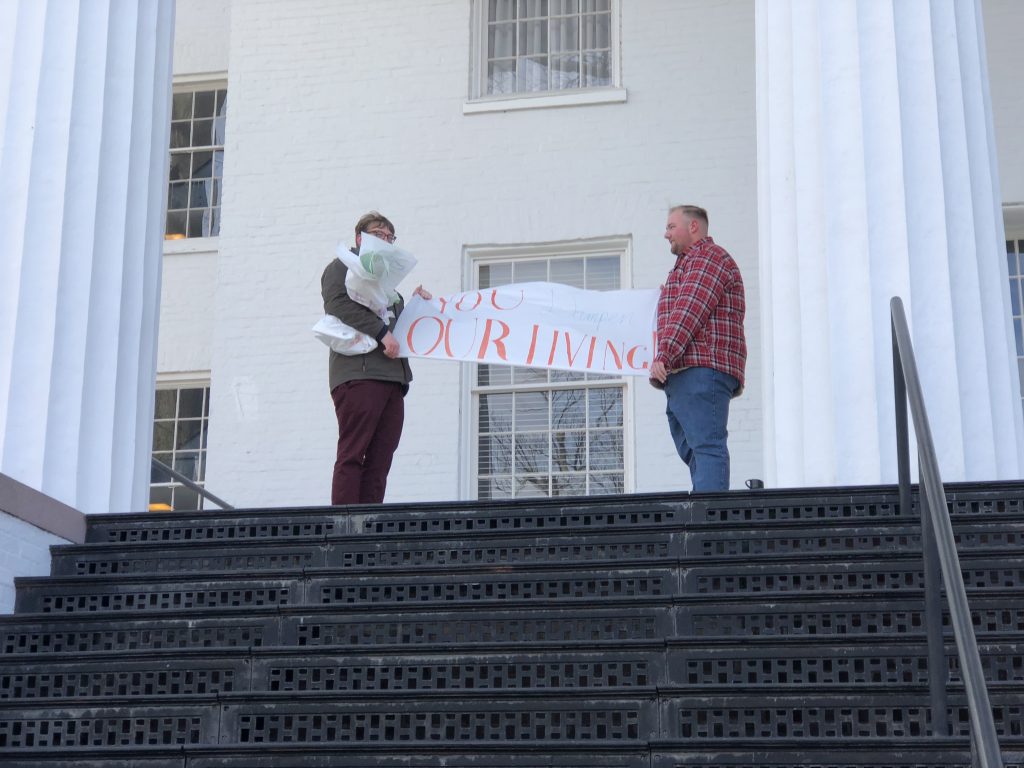 Democracy Matters, a grassroots political organization at Gettysburg College, organized a protest planned to go from 11:00 a.m. to 5:00 p.m. Friday at the steps of Penn Hall amid ongoing frustrations expressed by students over maintenance issues around campus, grievances that boiled over at Monday evening’s meeting of the Gettysburg College Student Senate. 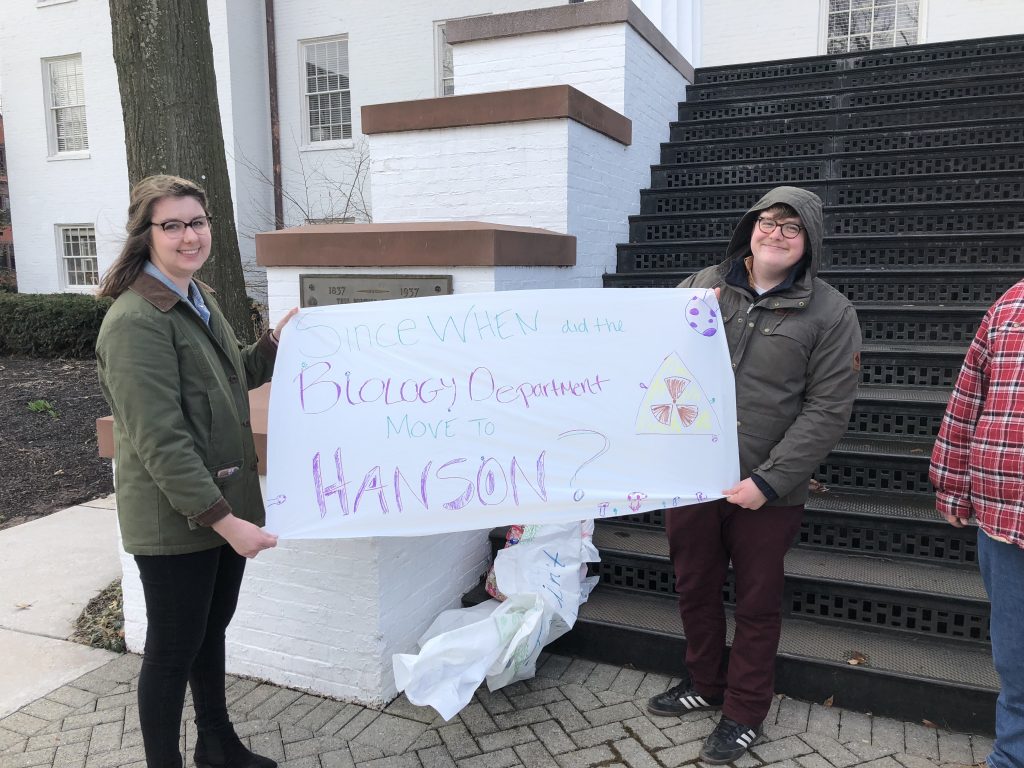 Meredith Staats ‘18 and Sam Weathers ‘18 were outside despite the chilly weather Friday. (Photo Jamie Welch/The Gettysburgian)

The protest is ongoing despite forecasts of 25 mph sustained winds with gusts of up to 60 mph leading to the declaration of a High Wind Warning as well as rain and cold temperatures anticipated throughout the day. Three protesters were on the steps of Pennsylvania Hall at 11:15 a.m. and by noon there were five students protesting.

Shortly before noon, Gettysburg College President Janet Morgan Riggs and Vice President of College Life and Dean of Students Julie Ramsey joined the protesters and expressed a desire to listen to the protestors’ concerns and find ways to address them.

Meredith Staats ’18 expressed concern about the $250 housing credit, suggesting that $250 may not be sufficient compensation for students affected by the mold since it only reflects a small percentage of room and board costs.

Dean Ramsey replied, “It was really intended originally, for students who lived in Hanson and felt that their belongings–they might want to replace them, they might want to launder them…it was to give them some money towards doing that. It wasn’t intended as anything other than that. It was a credit on the housing bill, but it wasn’t a housing credit.”

Riggs said that the possibility of simply cutting students a check for the $250 was discussed, but issuing a housing credit directly to the students’ bills was settled on as a matter of convenience.

“It just seemed like the easy thing to do,” Riggs added.

“So we take responsibility for–we think we could have been clearer about that,” Ramsey said.

Staats thanked Riggs and Ramsey for instituting regular checks for mold as part of the summer maintenance and room check procedures, but said that Facilities Services needs to do a better job responding to tickets in a timely manner, telling a story about how work orders for a improperly latching front door to Appleford Inn and Carriage House was marked resolved multiple times before Facilities Services workers actually came and fixed the door.

“One of the most helpful things, to me, that has come through this process is to hear that concern from the students and to hear it pretty loudly,” Riggs said. “I was…appalled isn’t really the right word–”

“I was discouraged,” Ramsey interjected.

“I was really upset to hear that students feel that the responses aren’t there,” Riggs said. “That’s something we want to fix.” 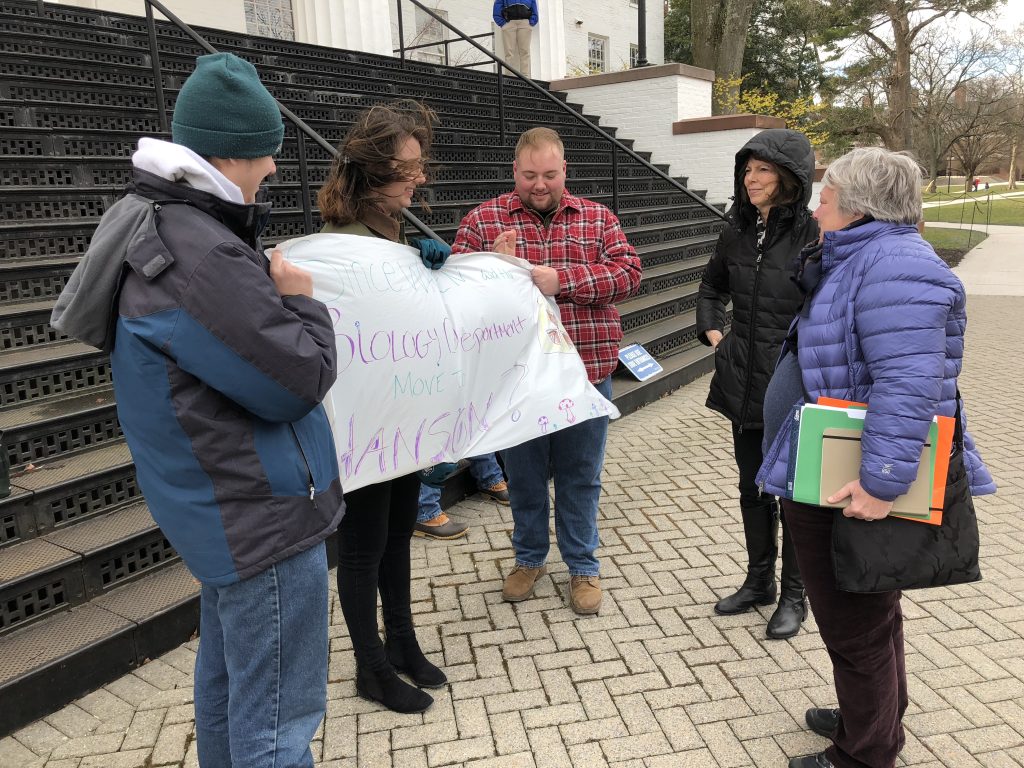 Riggs and Ramsey joined protesters Friday around noon to thank them for protesting and to discuss next steps. (Photo Jamie Welch/The Gettysburgian)

Ramsey and Riggs offered to meet with the protesters next week to discuss their concerns, gather ideas about ways to improve and look at next steps that can be taken to address the issues that they identify.

“I appreciate you being out here, and we hear you. I’ve heard you loud and clear,” Riggs concluded.

In a Facebook Live broadcast, Democracy Matters Co-Presidents Staats and Sam Genova ’18 said that Riggs and Ramsey are taking steps in the right direction, but argued that there is more work to be done. Staats called for a “more reasonable” housing credit and a follow up on the health concerns raised at the Student Senate meeting on Monday. Genova also called for a full coverage of all medical expenditures related to the mold.

Both Staats and Genova called for a full apology from the college, seemingly unaware that Ramsey had issued an apology on Tuesday that was published in The Gettysbugian.

“I will have to take a look at that Gettysburgian article, because if that’s true then I think that’s definitely a positive step,” Genova said.

On Friday afternoon, The Gettysburgian will interview Ramsey and Vice President of Finance and Administration Dan Konstalid regarding the Hanson Hall mold situation as well as other facilities issues around campus for this week’s edition of the “On Target” podcast, which will be released Saturday. Readers are encouraged to submit questions to editors@gettysburgian.com and to continue sharing stories of interactions with Facilities Services via this Google Form.