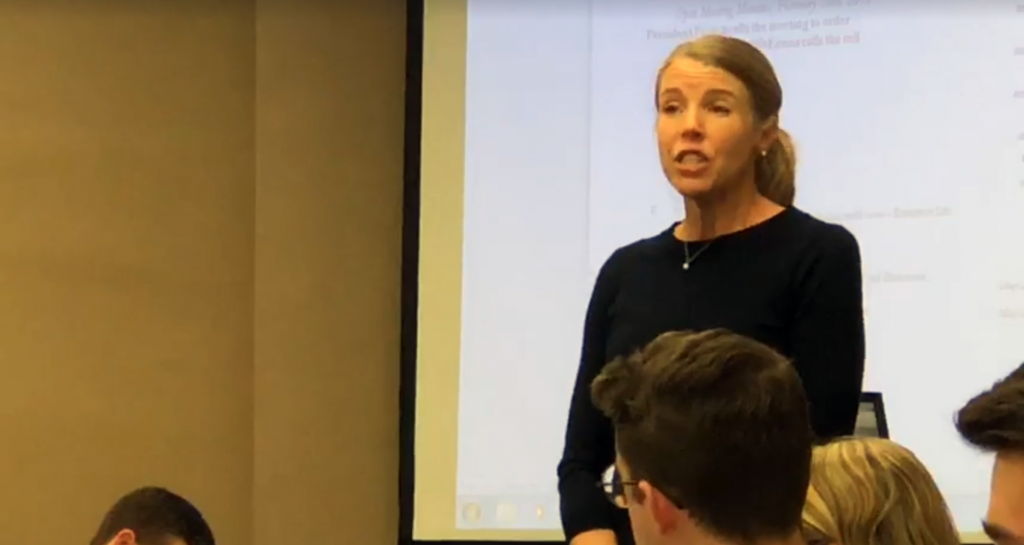 What began as a largely respectful dialogue and airing of concerns relating to the college’s handling of the mold situation at Hanson Hall during the 80-minute regularly scheduled meeting of the Gettysburg College Student Senate metamorphosed into a seemingly cathartic venting of grievances relating to the college’s lack of responsiveness and accountability towards facilities issues in an open session of the Senate’s Board of Directors.

The meeting opened with a presentation by Associate Dean of College Life for Residential & First-Year Programs (RFYP) Keira Kant, who came at the invitation of the Senate Board of Directors to answer questions and hear student perspectives on the issue. At the previous week’s Senate meeting, students expressed frustration that the college had initially promised basement residents priority housing and then changed course when the scope of the project changed from remediation of the basement only to cleaning the entire building as well as reports of property damage in excess of the $250 that each Hanson Hall resident was given as compensation.

Dialogue with Kant and Phillips

Kant and Danielle Phillips, Director of RFYP, reviewed the timeline for the college’s response to the mold discovered in Hanson Hall over winter break before opening the floor to questions and comments.

Many student comments centered around why the college did not do more sooner given that mold has been endemic to Hanson Hall in recent years according to dozens of student reports that have surfaced in recent weeks.

“There is no official standard for how much mold is too much mold,” Kant said, noting that the Environmental Protection Agency has no guidelines for air quality and that the college has relied on the recommendations from Compliance Management International (CMI), an environmental consultant, to respond to the issue.

Currently, the college does not do any ongoing or proactive assessment of air quality in residential buildings, but, in light of the issues at Hanson Hall, CMI will make recommendations to the college on procedures to monitor and respond to mold in the future across campus, Kant said.

In an email to The Gettysburgian sent Tuesday afternoon, Vice President of College Life and Dean of Students Julie Ramsey said that the college would add proactive visual assessments to its regular summer maintenance of buildings.

“The College will add an additional room-by-room visual inspection for mold as part of the summer room check process in order to proactively identify any issues,” she said.

Other questions probed how the college arrived at its decision to compensate each Hanson Hall resident $250 and why priority in the upcoming sophomore housing lottery was no longer being offered to basement residents, who were initially promised that they would receive such priority in an email sent Jan. 24.

“[The $250] is meant to address inconveniences students had.” – Keira Kant, Associate Dean of College Life

Kant conceded that the college did change its plans after the scope of the project changed from the initial assessment, which was that only the basement needed remediation and that it could wait until after the semester, to its final determination that all floors were affected and remediation needed to begin immediately. Furthermore, she admitted that basement residents were not consulted or even notified of the decision to shift compensation from housing priority to a $250 housing credit before the decision was released generally; Senator and former basement resident Abby Hauer ’21 noted that many residents read about the decision in The Gettysburgian.

With respect to the amount of the credit and whether property damage in excess of that figure would be further compensated, Kant deferred to Financial Services for the $250 figure and said that homeowner’s or renter’s insurance may cover additional expenses, referring students to Regina Campo, Co-Director of Human Resources, for more information.

“[The $250] is meant to address inconveniences students had,” Kant said.

Ultimately, Kant defended the institution and said that her presence at the meeting was emblematic of how seriously the college is taking the issue, but she could not promise any specific changes in light of the feedback.

“I’m going to share what you’ve shared with us tonight. That doesn’t mean anything will change,” she said. “I am standing here today to tell you that I think everything we have done as an institution is in the best interests of students … I am very confident saying that.”

In closing the conversation with Kant, Senate President Luke Frigon, who said at last week’s meeting that the college should “keep its word” and “pay [students who had property damage” back,” said that among his greatest concerns was that no one from the college apologized to affected residents.

Kant did not take the opportunity to do so.

“I think we can push more accountability,” Frigon said before Senate pivoted to discussing other matters.

“I am standing here today to tell you that I think everything we have done as an institution is in the best interests of students.” – Keira Kant

Board of Directors Meeting

After the Senate adjourned, however, an open meeting of the Board of Directors was held to debrief the conversation with Kant and discuss paths forward on the mold issue, and those in attendance quickly abandoned the largely dignified tone of the official meeting to excoriate the college and specifically RFYP for its handling both of the Hanson Hall issue and maintenance and facilities concerns systemically.

“I don’t want to bash Keira,” Frigon said to open the conversation before opening the floor.

“This is not Keira’s fault. She didn’t have anything to do with the mold obviously,” said Senator Nick Arbaugh ’20 before listing other maintenance issues in residential facilities including a mold issue he had earlier this year in his shower at Smyser Hall that was not resolved, he said, until his father contacted the college. “This is f–cking bulls–t … Come on, this is ridiculous. We need to know who we can go to to talk to about this. Let’s be honest, she [Keira] went up there; she did her job. She deflected. We don’t need to be deflected right now … $250 isn’t going to cut it. I think that’s ridiculously irresponsible.”

Senate Parliamentarian and Policy Committee Chair Patrick McKenna ’20 honed in on the lack of an apology and decried what he views as a systemic failure by the college.

“I think the most, frankly, appalling part of this whole thing … is that she [Kant] had the gall to not even say, ‘We’re really sorry that this happened,'” McKenna said. “The fact that, frankly, tuition is 66 — 67 — thousand dollars a year and they can’t even provide us basic facilities is galling.”

Frigon said, “We got nothing out of her to be honest,” positing that Joe Gurreri, Director of Student Activities & Greek Life and the College Life representative who attended the Senate meeting and stayed for the Board of Directors meeting, provided more information and context in a few comments after the meeting than Kant did during the course of the entire session. Additionally, Frigon called it “flabbergasting” that Kant “didn’t say sorry” and concluded, “Gettysburg College is not taking care of its students.”

Senate Clubs Liaison Jackie Crowley ’20 noted that Gettysburg requires students to live on campus throughout their time at Gettysburg, so it should have an obligation to make sure those living accommodations are functional.

Anders Spittal ’20 objected to a comment from Kant that it would be up to individual students to seek accommodations from Academic Advising if they need assignment extensions or support because of being required to move in the middle of the week or anything else related to the mold situation; Senate Treasurer Sarah Berkowitz ’18 called it “baffling” that there was no communication with Academic Advising about such issues and said that, even in her senior year, she would not know how to approach such a conversation.

On Tuesday afternoon, Ramsey invited any students with ongoing academic issues stemming from the Hanson mold situation to contact her directly, and she will work with Academic Advising on a case-by-case basis.

“The most important part is, moving forward, there needs to be an institutional policy change [in how maintenance issues are evaluated and addressed].” – Jack Lashendock ’20

As the discussion moved towards next steps, senators and other attendees discussed the need for formal policy changes, institutional pressure, and support for Hanson residents.

“The most important part is, moving forward, there needs to be an institutional policy change [in how maintenance issues are evaluated and addressed],” said Senator Jack Lashendock ’20.

Senator Haley Gluhanich ’19 suggested the Opinions Committee draft an opinion urging the college to test for mold in all buildings, which Committee Chair Michael Mancuso ’19 said his committee could begin working on this week.

Several attendees at the meeting suggested that this was ultimately a public perception issue for the college and that threats of exposure at Get Acquainted Day and signs that students would see during admissions visits would be opportunities to get the college’s attention.

“This college makes its money through marketing itself really well. It does a really good job, and the best way we can hit them is by hitting them in their pockets,” Arbaugh said. “We can plaster posters up the next time tours come through.”

Frigon demurred at the suggestion Senate should be involved in such efforts, but he suggested that students could do so on their own if they felt strongly about the issue.

Sticking with the public relations theme, Andrew Fitzsimmons ’19 suggested that Senate could coordinate efforts to help students required to switch floors during the coming days move their belongings would be an opportunity to support the people most affected by the issue.

“Their policies are directly flying in the face of what they are saying, and it is absurd.” – Patrick McKenna ’20

In an informal gaggle after the conclusion of the Board of Directors meeting, attendees developed plans to potentially assist Hanson residents in moving over the weekend and to work on shaping public opinion in the days to come.

Plans began to circulate on Facebook late Monday evening for a demonstration to be held Friday sponsored by Democracy Matters called “Break the Mold: Gburg’s Failure to Ensure Students’ Well-Being” in which students will “peacefully protest on the steps of Penn Hall” and “let the administration know that we demand to be treated better than this.”

McKenna cited the way the college brands itself as a residential college as a juxtaposition to how the college has handled this situation.

“This is a four-year residential college. This is a community where you are safe and where we can live … this is what they hit us with from the second we get here from Orientation through the first year,” said McKenna. “Their policies are directly flying in the face of what they are saying, and it is absurd.”

Editor’s Note: If you have had an experience — positive or negative — with maintenance at Gettysburg College, please tell us about it by completing this Google Form. Please contact editors@gettysburgian.com with any questions.

Editor’s Note: This article was updated at 3:53 p.m. on Tuesday to reflect the apology issued by Dean of Students Julie Ramsey. (-B. Pontz)