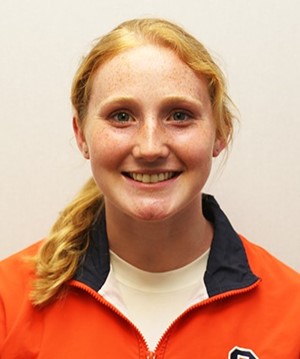 The Gettysburg College Women’s Track team continued their strong start this past weekend at the Lehigh John Covert Classic. Competing against a wide range of teams from all three divisions of collegiate competition the Bullets posted many strong times.

One athlete who has been leading the charge early on for the Gettysburg College Women’s Track and Field team and continued to do so this past Saturday is junior Sarah Rinehart.

Returning from a strong cross country season in which she finished 20th at the NCAA regional meet and qualified for the division III national 6000-meter competition.

Rinehart then began her indoor track campaign with just a short mile.

The junior completed the race in 5:37.34 and 15th overall in a field of 42 runners. But Rinehart’s day was only getting started.

A few hours later the medley runner returned for the 3000-meter competition. Known for strong finishes, the lady Bullet moved through the field, picking off runners one by one until finishing in 2nd place with a time of 10:59.23. This time would be a personal record by five seconds for Rinehart and her second Centennial Conference qualifier of the day.

Despite tired legs from finishing the 3000-meter race only an hour before, Rinehart returned to the track once more as the anchor to the Bullets’ 4×400-meter relay. Passing a competitor in the final lap, Rinehart moved the team to finish second among Division III teams.

With a long season ahead, Rinehart will look to continue her success in a wide variety of events. She qualified in 400 meters, 800 meters, and 1500 meters last year, while also scoring in the steeplechase at last year’s outdoor conference meet.