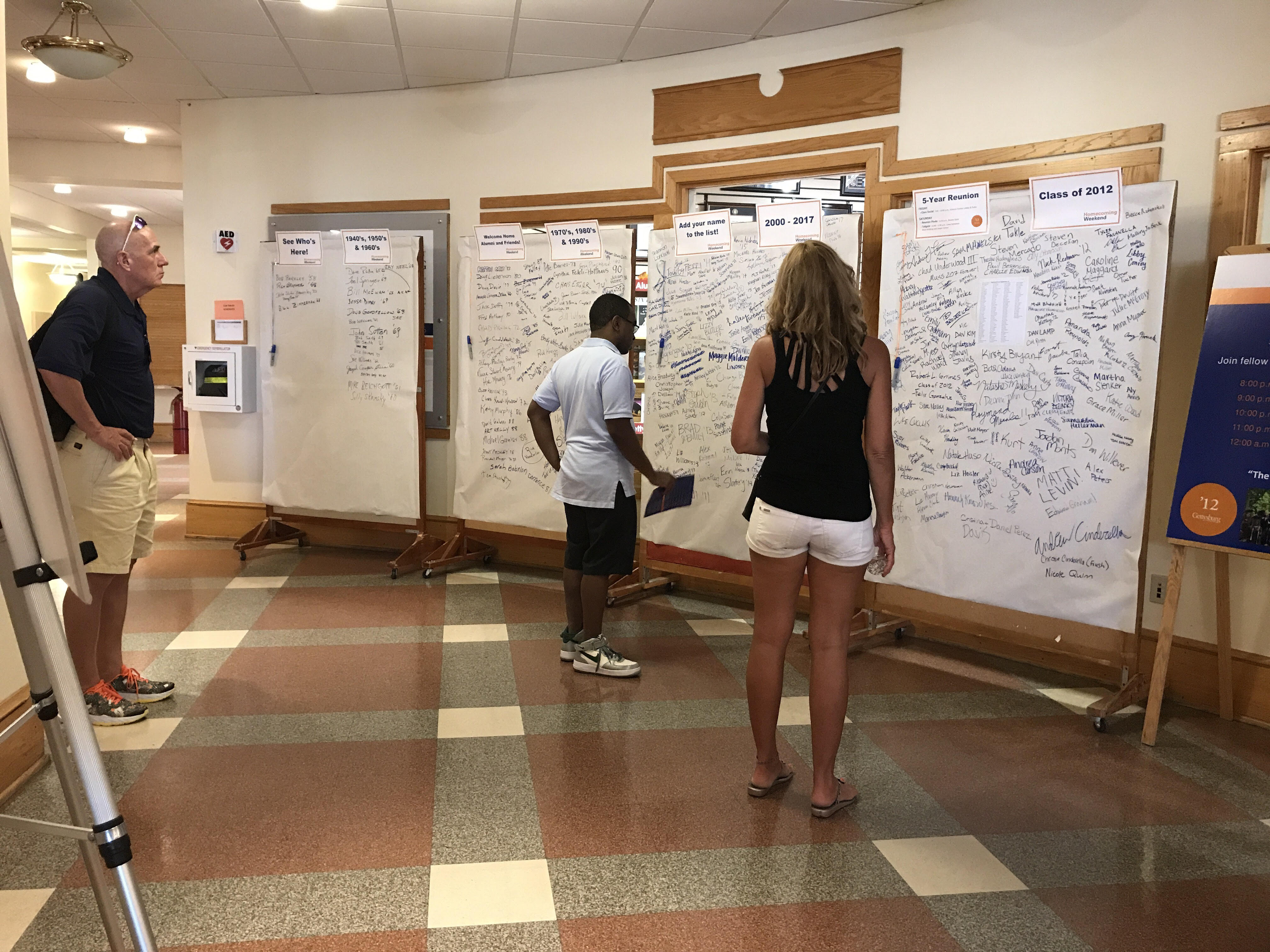 Over the weekend, Gettysburg College welcomed back alumni for Homecoming celebrations and received an enthusiastic attendance. Special events, including the Class of 2012’s Five Year Reunion and the Swimmers’ Reunion, prompted many alumni to return, and others came to reconnect with friends, classmates, professors, and the Gettysburg campus.

Although 468 alumni registered to attend, the Development, Alumni and Parent Relations staff expected to see many more graduated Bullets on campus. Upon entering the CUB lobby, an alum would have seen the orange and blue check-in table with pins for each class year and other Gettysburg merchandise, tables of free refreshments, and shiny posters of new renovation plans. Most prominently, four large boards stood in front of the bookstore— each covered by a sheet of paper and labeled with graduating years for alumni to sign and look for familiar names. These boards showcased the signatures of Bullets from 1950 to 2017, and the Class of 2012 had an entire board to themselves in honor of their milestone.
Returning alumni were presented with a packed schedule of events to attend: departmental meetings and colloquiums, Greek Life reunions, Schmucker and Musselman exhibits, the Hall of Athletic Honor Reception and Inductions, various socials, The Cupola Society Dinner and Celebration, and tailgates preceding the football game against Dickinson College.

The game was one event that drew recent alumni Megan Bailey ‘14, Rebecca Borovsky ‘16, Sarah Kaboly ‘16, and Jenna Fleming ‘16. They also attended the Fun(d) run on Saturday morning and said that they enjoyed cheering on fellow alumni. Bailey and Borovsky work to engage young alumni as members of the BOLD Council.

One young alumna, Amy Houck ‘12, returned for her class’s five year reunion and planned to attend the Homecoming Networking Social, the Class of 2012 Tailgate, and the Catholic Campus Ministries’ Open House. Mostly, however, Houck looked forward to seeing familiar faces on campus. “It’s the Gettysburg Know,” she said. “It’s like, ‘Oh, I don’t know your name, but I recognize you from class.’”

The “Gettysburg Know” was visible all across campus. A group of recently graduated Bullets laughed and hugged one another in the CUB lobby, while President Riggs ‘77 spoke and shook hands with fellow alumni at Musselman Stadium.

Also returning for the Swimmers’ Reunion, Jamie Berrier ‘86 reminisced with her former teammate, Patti Schuman ‘84, and Schuman’s former roommates, Leslie Sanderson ‘84 and Martha Orem ‘84. Sitting by the Commons, they shared coffee and memories of “all those early morning swim practices” and hanging out by the post office until their next class.

“It feels so good to be back,” said Schuman.

Orem agreed, saying, “Every time I come back here, I feel like I’m twenty-one again.” Despite having graduated, she stays connected to her alma mater. “If I see a ‘G’ that might be Gettysburg, I get super excited.”

Schuman and Orem noted that they had not seen each other since graduation, yet, as Berrier said, “It feels like I’ve never not seen them.”

Homecoming certainly reminded alumni of their time on campus. Bob Barkley ‘58 remarked, “A lot of changes started when I graduated.” He recalled eating meals in the basements of various halls and living on the top floor of Pennsylvania Hall as a first year.

While this year was the first Homecoming for some, Barkley returns to Gettysburg at least twice a year for Homecoming Weekend and Reunion Weekend. As a fourth-generation Gettysburg graduate, a former Gettysburg College football and golf coach from 1959 to 1961, and a member of the Heritage Society, Barkley represents the many alumni who remain active figures in the Gettysburg community.
Whether to cheer on the Bullets football team or to reunite with teammates and classmates, alumni who returned for Homecoming seemed overwhelmingly glad to be back.