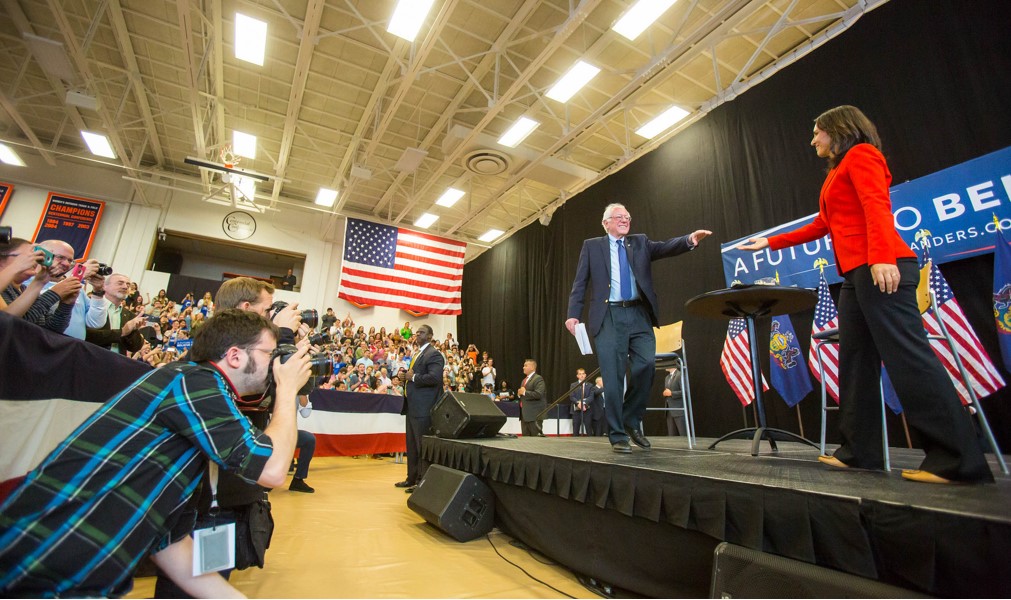 It was an overcast afternoon for Earth Day on Friday, April 22 when Senator Sanders held a dialogue with Democratic Congresswoman Tulsi Gabbard of Hawaii in the Bream Wright Houser Athletic Complex at Gettysburg College. Although he was emerging from a tough loss in the NY primary, Senator Sanders did not appear deterred. The event was overflowing with both community members and students enthusiastically cheering for Bernie. He spoke about the moral imperatives to stand up to the fossil fuel industry, duty to reduce wealth inequality and especially the moral obligation to provide veterans with mental health care and benefits

Former US Marine Tyson Manker, a representative of Veterans for Bernie, opened the event by speaking about his experience as a former combat veteran of the Iraq War. Edward self-identified as one of thousands of veterans that support Senator Sanders for president. The former Marine also acknowledged a number of veterans that traveled to hear the Senator speak at Gettysburg College.

Mr. Manker explained that he supports Bernie for showing the judgement and foresight to keep America safe. The veteran cited Senator Sanders’ plan to combat ISIS, his vote against the Iraq War and his prediction of the adverse consequences of the Iraq War as signs of the Senator’s good judgement. He also claimed that Sanders is the candidate with the most veteran support.

He advocated for the Fairness for Veterans Act sponsored by Congresswoman Gabbard. The proposed act would enable veterans without honorable discharges to receive an honorable by presenting proof of PTSD at the time of their discharge to a discharge review board. This is important for allowing veterans that were dishonorably discharged for reasons related to PTSD to receive veteran benefits. Mr. Manker related the story of his dishonorable discharge after his combat service in Iraq during 2003. He explained that he returned home after three and a half years of service to find that his parents had separated and his life was in turmoil. He smoke a marijuana “joint” with his fellow marines while on leave and was dishonorably discharged as a result. He claimed that this was before the military understood or treated PTSD. Ultimately, he argued that the Fairness for Veterans Act is important because 13% of veterans are dishonorably discharged from service without receiving any benefits.

Army National Guard Major and Hawaii Congresswoman Tulsi Gabbard took the stage after Mr. Edwards to share the opening lines of Abraham Lincoln’s Gettysburg Address before Senator Sanders recited the closing lines of the Address. The Senator echoed the closing line highlighting the importance of a “government of the people, by the people, for the people” at this moment in history. From here, the Senator began a brief speech in which he criticized the overwhelming political influence that superPACs allow corporate interests and billionaires to have on American democracy. As he has declared many times before, he denounced tax breaks for the wealthiest 1% of Americans and explained the need to overturn the ruling of Citizens United vs. FEC.

Senator Sanders implored the audience to exercise their enormous collective power to effect grassroots democracy. He retold the story of his campaign, which began 65 points behind in the polls and has now won 17 primaries and caucuses. The Senator explained the unlikely phenomena by stating, “We are doing something pretty radical in American politics; we are telling the truth.”

He stated in a matter-of-fact tone that the American economy is “rigged,” citing the “grotesque inequality” in the distribution of wealth and income as evidence of his assertion.

He argued that these “immoral” and unsustainable economic conditions will not make America great.

The Senator also criticized the prison industrial complex in America. He cited a figure that approximately 2.2 million Americans are currently incarcerated, which he claimed to be more than any other country in the world. This fact is confirmed by prisonstudies.org.

Sanders claimed that the US spends $80 billion a year incarcerating Americans and disproportionately incarcerating African American and Latinos. An article by smartasset.com cites the operating cost of prisons at $74 billion per year. Senator Sanders argues that this money could be better spent investing in education and jobs for young people. He asserted that the high prison population and the disproportionate rate of incarceration for African Americans and Latinos is correlated to youth unemployment as high as 50% in major cities such as Philadelphia. He criticized the private prison system and the perverse incentive to jail people in order to earn more profits. He cited the case of former Luzerne County Judge Mark Ciavarella Jr. who accepted bribes from developers of juvenile detention facilities to sentence more juveniles to their facilities.

Characteristically, Senator Sanders spoke about the high levels of student debt and the need for the U.S. to stop punishing people for seeking an education. He recognized the need to have the best education system in the world driven by the emergence of highly competitive global markets. He personalized the speech by speaking about his parent who never attended college, which is one of the many reasons why he believes that every student in American should have the opportunity to get a higher education regardless of their socioeconomic class

He said, “This campaign is about challenging status quo thinking” and criticized the media for promoting feelings of futility in grassroots democracy. The Senator emphatically stated that it is the right of every citizen to have access to quality, cost-effective healthcare. He explained that no one person can address the issues and change the crises facing our nation, rather each individual needs to stand up and take action.

Bernie also addressed the need for political unity in America. He stated that in order to move forward as a nation Democrats and Republicans need to reach out to one another to find common ground and rally the American people. He shared his history of working with Republicans like John McCain to create the most comprehensive VA health care legislation in modern American history.

The talk took a somber turn when Congresswoman Gabbard questioned Senator Sanders about the issue of veteran suicide. Sanders mentioned his work as the chairman of the Senate Veteran’s Committee. He declared that is the government’s moral obligation to treat post-war injuries including traumatic brain injuries and psychological injuries such as PTSD. The Senator related the story of a woman whose veteran husband served in WWII. The man still has nightmares of hand to hand combat that he experienced in WWII, and one evening he nearly strangled his wife when he awoke in the middle of the night believing that he was under attack. The Senator used this story to transition into the importance of supporting the families of wounded warriors. He criticized American militarism and said, “If you cannot afford to take care of veterans, do not go to war.”

He argued that the issue of foreign policy and military intervention is not about whether or not we like foreign dictators, but whether or not they pose an imminent threat to American people. The Senator firmly reminded the crowd that he use of military force should be the last response and not the first response. He explained that diplomacy is not weakness but intelligence and strength.

As a final remark to commemorate Earth Day, Senator Sanders talked about the need to move away from coal, oil and gas as well as his support of alternative and sustainable energy sources such as solar and wind. He declared that the issue of climate change must be addressed through international cooperation in order to be effective.