Just recently, Ms. Isabel Gibson Penrose took the time out of her day to verify Young Americans for Freedom’s “new abortion posters”. On behalf of YAF, I would like to thank you for starting up some discussion on this topic.

In Ms. Gibson Penrose’s article, she fact-checked every aspect of the posters. She brought in some evidence, a good amount of opinion, and also some accusations. We’re going to go about it a little different this time around, and 1) I’m ot going to mention as much opinion-driven “facts” and 2) I’m definitely not going to accuse Ms. Gibson Penrose of having malicious intentions from writing her article. That’s just not how we do it over here at YAF. So here is an assessment of how accurate Ms. Gibson Penrose’s claims are.

“Science Shows: A more accurate sign would read, “I Could Gestate and Develop into a Person, Eventually.” According to the Guttmacher Institute one-third of abortions occur six weeks into the pregnancy or earlier (when the fetus is an embryo that consists of two layers of cells,) and 89 percent occur within the first twelve weeks of pregnancy (when the fetus is about the size of a kidney bean). The depiction of women who get abortions as baby killers is both harmful and factually inaccurate.”

What YAF says: I have to applaud you at your success at completely dehumanizing a child in the womb, since you referred to the child as “an embryo that consists of two layers of cells” and said it is “the size of a kidney bean”. To keep it simple, life begins at conception. Langman’s Medical Embryology 7th edition states, “The development of a human being begins with fertilization, a process by which two highly specialized cells, the spermatozoon from the male and the oocyte from the female, unite to give rise to a new organism, the zygote”. Additionally, a number of prominent scientists and physicians can confirm this claim. Ashley Montagu (keep in mind he is completely unsympathetic to the pro-life movement), a geneticist and professor at both Harvard and Rutgers said in his book Life Before Birth, “The basic fact is simple: life begins not a birth, but conception.” And just to top it off, Dr. Jerome LeJune (he discovered the chromosome pattern of Down Syndrome!) a professor of genetics at the University of Descartes in Paris stated in his testimony to the Judiciary Subcommittee “after fertilization has taken place a new human being has come into being”. So, there you have it. A fetus is a person.

“Facts Say: The statistic of 3,315 checks out as accurate – but is presented without context, when context is vital. There are around 1.2 million abortions performed each year in the United States, putting the abortion rate at about 20 per every 1,000 women aged 15-44. Worldwide the rate is higher, with 28 abortions per every 1,000 women aged 15-44. America is not the lone country where abortions are performed, but we are lucky enough to live in a country where the abortions that are performed are safe and legal.

Also, I feel it is important to reiterate that abortion is not synonymous with loss of life. It is a completely safe and legal medical procedure that terminates a pregnancy that could have otherwise developed into a fetus.”

What YAF says: You said the statistic was accurate. That’s all we needed. Also, I will say again, life begins at conception. Please refer to our response to statement #1 for the facts.

“Facts Say: According to the Center for Disease Control and Prevention the number one cause of death among black Americans is heart disease, while cancer is the number two cause. Diabetes is cause number six for black men and number four black women. HIV does not even crack the top ten, begging the question of why it was even included in the poster’s list. Abortion is not mentioned, because (I’ll say it again) abortion is not a killer.”

What YAF says:  Once again, life begins at conception. Please refer to our response to statement #1 for the facts.

“Facts Say: Planned Parenthood provides a variety of services to millions of patients each year – according to the Washington Post abortion makes up about 12 percent of those services (they arrived at that statistic by dividing the 327,653 abortion procedures Planned Parenthood reported by the 2.7 million patients that visited Planned Parenthood in 2013). So yes, Planned Parenthood is a provider of safe and legal abortion services. The first sentence checks out! The second one is a little less cut and dry. According to NPR, 60% of the approximately 1,700 clinics that provide abortion services are located in majority-white neighborhoods. This statistic also holds true of the providers that perform over 400 abortions a year – 58 percent are in majority white neighborhoods. According to the Guttmacher Institute fewer than one in ten abortion providers are located in neighborhoods where more than half the residents are black. Responding to requests for demographic information Planned Parenthood released information which showed in 2013 that 14 percent of their patients in America were black – a number fairly proportional to the percentage of black people in the American population.

What YAF says: Oh, this is when it gets fun! We just love talking about Planned Parenthood. You didn’t bother to accurately fact check statistics that 78% of Planned Parenthood clinics are located in minority communities so I’ll do it for you. I applaud your determination to get all these facts, I really do. But getting information from Planned Parenthood is like getting information out of Hillary Clinton – it just can’t be trusted. Unless you videotape them without them knowing. You can go to protectingblacklife.org for the interactive map (it’s pretty cool and will supply you with much more detailed information). But they created a map that pinpointed all the Planned Parenthood clinics through out the United States. They even specified if the community the clinic is in or near is either highly populated with African Americans, Hispanics, or both. 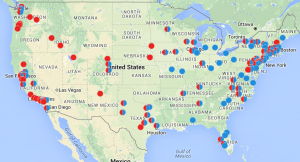 Let me just zoom in on a random city…. Let’s do my home state for the heck of it: New York. When I click on Manhattan, NY this pop-up appears: 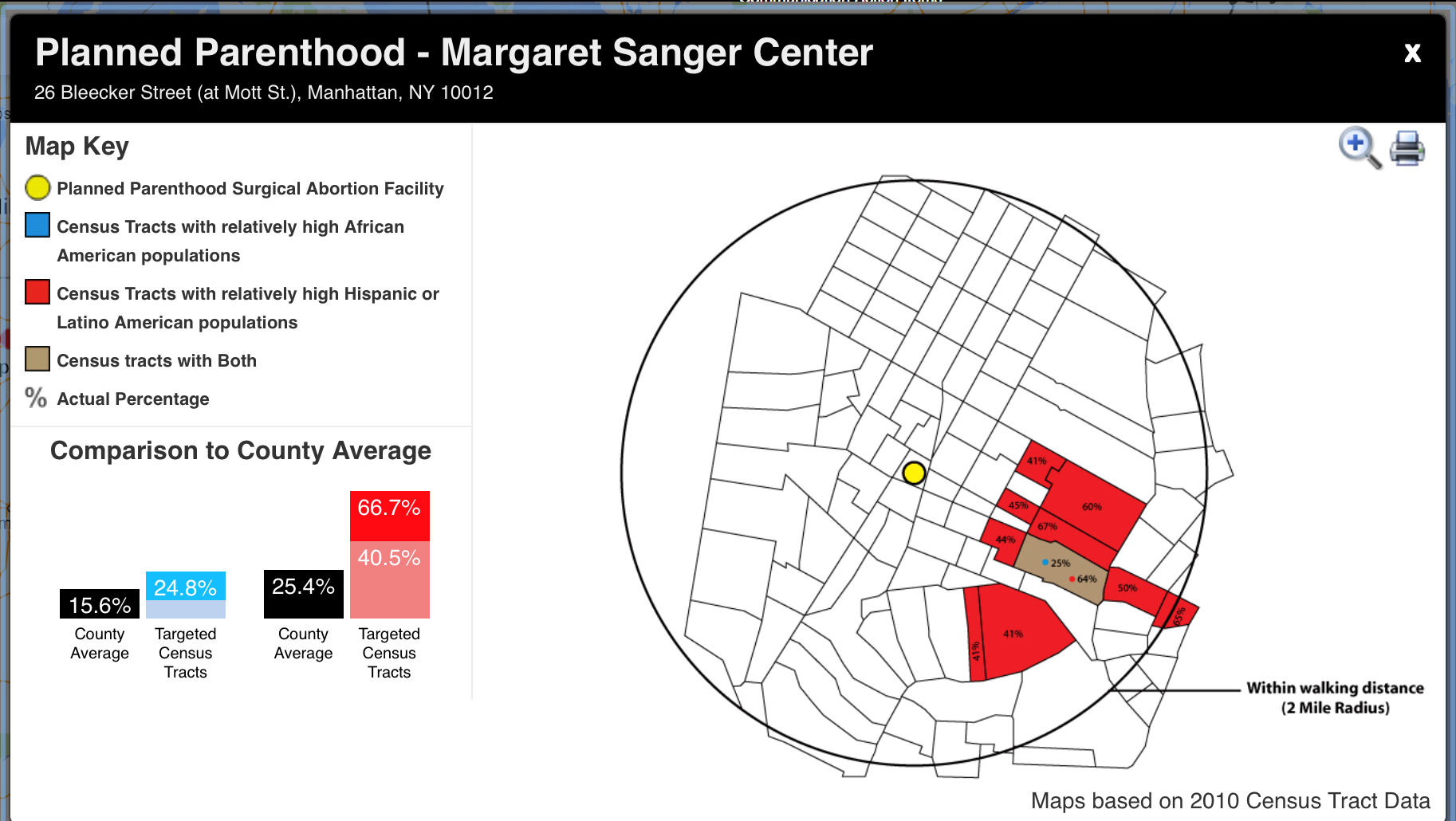 Ugh I love that it’s titled Margaret Sanger Center. Anyway, they have highlighted the areas that have a high percentage of Hispanics. See how close Planned Parenthood is…

Let’s do another one. Columbia, Missouri. Go to my nice little map and… 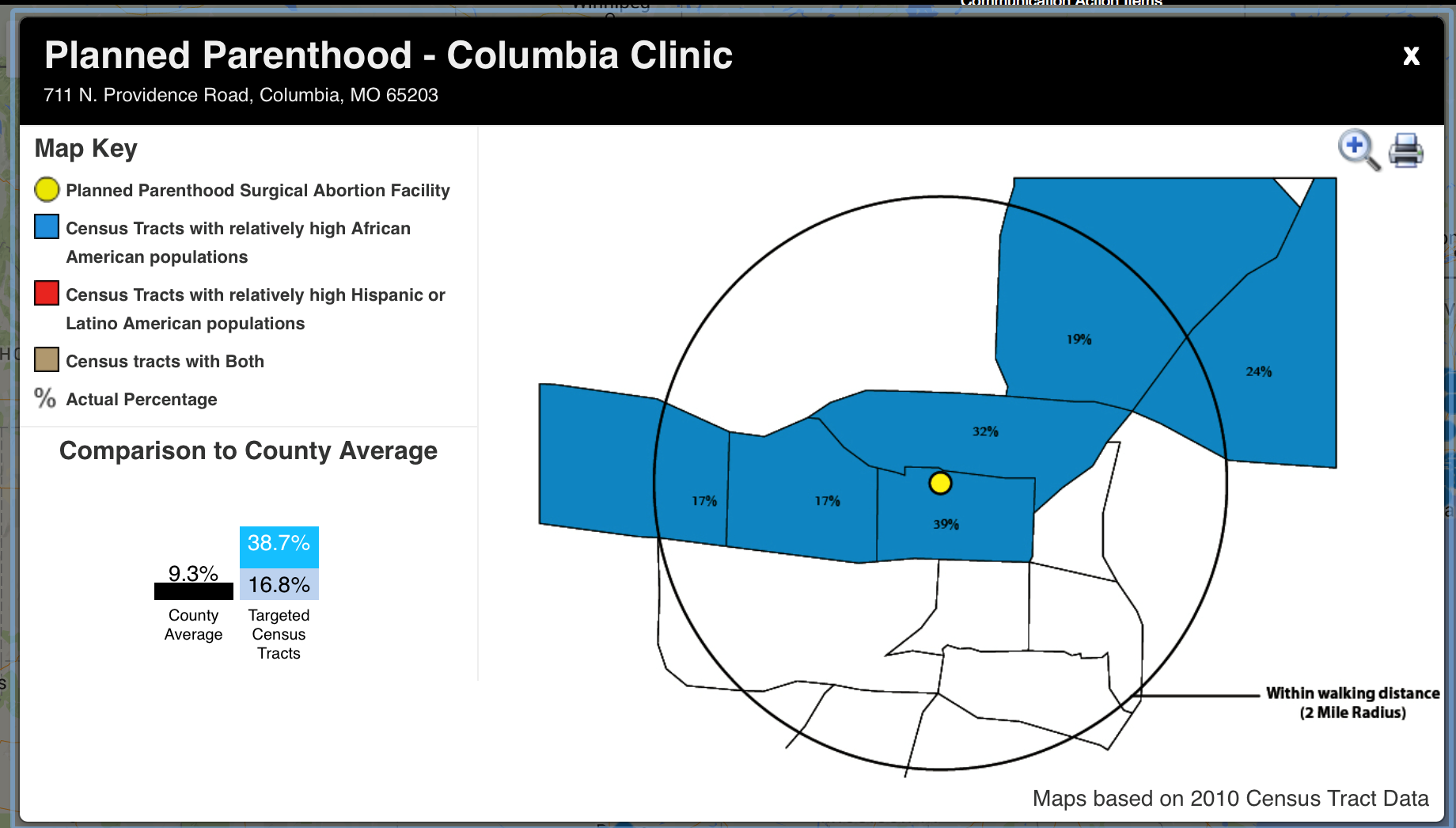 Would you look at that!

I think that proves the point.

“I Say: Don’t refer to black people as “blacks.” Facts Say: This checks out, sort of. Women of color are five times as likely to terminate a pregnancy as white women. However, this fact is also presented without context – context that is once again key to understanding.

In a powerful piece for the Washington Post Wisconsin Congresswoman Gwen Moore writes, “No one denies that the abortion rate in black communities is higher than in white communities, but failing to mention the underlying context behind these numbers demonstrates a disturbing lack of awareness of the impact of poverty and the realities faced by black women.” This is exactly where these posters fall shortest – offering statistic that have a place in the real world, instead of just the world of outrageous rhetoric.

YAF wants to shame black women for having abortions or rile people up into believing inane conspiracies about black genocide, but they don’t offer any viable solutions to problems like the poverty that impacts many black women in America.”

What YAF says [in response to the first paragraph]: The statement was copied and pasted directly from a website, so take it up with them PC police. If the fact checks out, it doesn’t “sort of” check out. It’s accurate. That’s all you need to say.

“I Say: This is the worst invocation of the “Black Lives Matter” slogan I have ever seen. The Black Lives Matter Organization, founded by Patrisse Cullors, Opal Tometi and Alicia Garza, states on its website that BLM is “rooted in the experiences of Black people in this country who actively resist our de-humanization…[it] is a call to action and a response to the virulent anti-Black racism that permeates our society.” Taking such an empowering message and twisting it in an attempt to further the oppression of black woman is despicable. I Suggest: You stay away from these factually inaccurate and grossly offensive websites. If you’re interested in the Black Lives Matter movement I suggest you visit blacklivesmatter.com or check out Gettysburg’s own Black Student Union. If you’re interested in learning more about keeping abortion safe and legal I suggest you visit prochoiceamerica.org. If you’re interested in staying informed about both Black Lives Matter and abortion I suggest averting your eyes when you pass these posters in the hall or cutting out the alternative poster I have presented alongside this article – but please, please, don’t tear YAF’s posters down. That is not a debate we need to have again.”

What YAF says: I understood that the point of this article was to fact check how accurate YAF’s claims were, but it doesn’t seem like that was upheld. YAF believes that the Black Live Matter movement does go hand-in-hand with the message behind the posters. You said BLM is “rooted in the experiences of Black people in this country who actively resist our de-humanization…[it] is a call to action and a response to the virulent anti-Black racism that permeates our society”. YAF believes that black people are dehumanized through abortion. I mean its founder wanted to exterminate them. YAF thinks this is an injustice that can’t be ignored. YAF is not pushing to further “oppress black women.” Dr. Martin Luther King Jr., who was staunchly pro-life, once said, “The Negro cannot win if he is willing to sacrifice the futures of his children for immediate personal comfort and safety. Injustice anywhere is a threat to justice everywhere”. I think, and YAF thinks, that we must uphold Dr. King’s dream.

To conclude, I will quote Ben Shapiro here “facts don’t care about your feelings”. So regardless of how “grossly offensive” you or anyone else think the websites are, and regardless of if you think “this is the worst invocation of the “Black Lives Matter” slogan”, the message YAF is spreading has a lot of accuracy. Ms. Gibson Penrose mentions multiple times how YAF failed to provide context to a number of these facts, and she so graciously brought up how poverty affects African American women. Yes, this is a fact that we also can’t ignore. Maybe ones economic status and education level affect their chances of undergoing an abortion. These are things we need to talk about. Understanding who abortions target and why, will help us all to move towards a more productive and less-harmful solution.