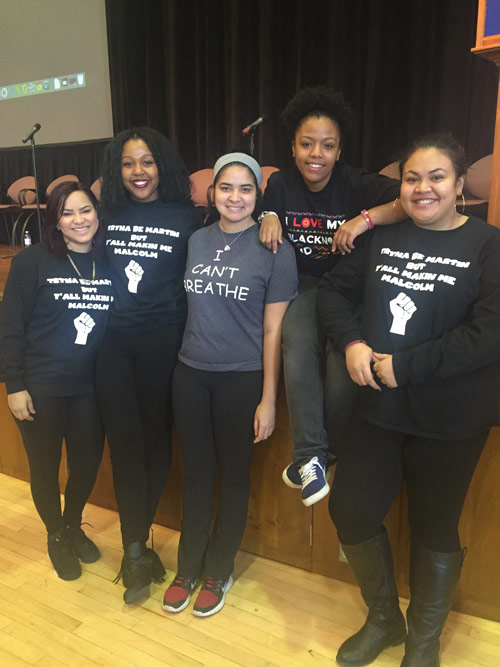 The town hall meeting to address racism was organized by students, including members of BSU, LASA, and GASA. Photo courtesy of the author.

A town hall meeting was held on Thursday, Jan. 21 to discuss race and racism in the context of Gettysburg’s campus. The event was the culmination of hours of planning on the behalf of students and campus officials.

President Janet Morgan Riggs introduced the meeting, stating that the event was planned by students. She emphasized respect and forgiveness as well as open dialogue and described individual unconscious bias, which is built into institutional biases and culture, as being the most difficult to overcome. She also proposed the question of what we need to do in order to provide an atmosphere for students of color to feel at home on our campus. The final goal she proposed was for everyone to leave the town hall meeting both troubled and inspired to commit to making a positive change.

Current policies and actions being taken to remedy the campus climate include the diversity and inclusion action program, the Board of Trustees sub-committee, improvement of the Intercultural Resource Center, New Member Education training for students in Greek organizations, programming designed to bring different types of students together, a new space for the Diaspora House, improving transportation needs on campus, the campus climate survey and the classroom climate and faculty composition.

The Provost then spoke on his intent to attract more diverse teacher/scholars and to address issues in timely and meaningful ways. He also strongly encouraged faculty and colleagues to complete the IDI as part of a department-wide inclusion action program.

Senior Ashley Fernandez then introduced herself and the purpose of the meeting. She used the phrase “We are Gettysburg too” to highlight the fact that students who do not resemble the majority are still part of the community. At Gettysburg there are 2,632 full-time students, of whom around 2,060 are white and 560 are non-white.

A video titled “We Are Gettysburg Too” was then played, which showed students of color discussing their experiences at Gettysburg and their frustrations with the way they are seen and treated in and out of the classroom. Senior Jasmine Matos spoke that “her accent does not have anything to do with her educational abilities,” as she has felt that others on campus call her academic credentials into question because of her accent.

There was also clarification about what the meeting and the overall movement across the nation was not about: “coddling” students, “being politically correct” or “having a pity party.”

Ja’Nai Harris, a senior, the president of the Black Student Union and a Diversity Peer Educator, then spoke about how she thinks and reflects upon her race in the context of her every day experiences. “Gettysburg wasn’t made for us …but that doesn’t mean it can’t be,” she said.

Panelists then joined the stage, and students asked a variety of questions touching on topics of how to be a good ally, how to better encourage inclusion and what actions can be taken next. Several students also had opinions on their experiences with race and diversity at Gettysburg.