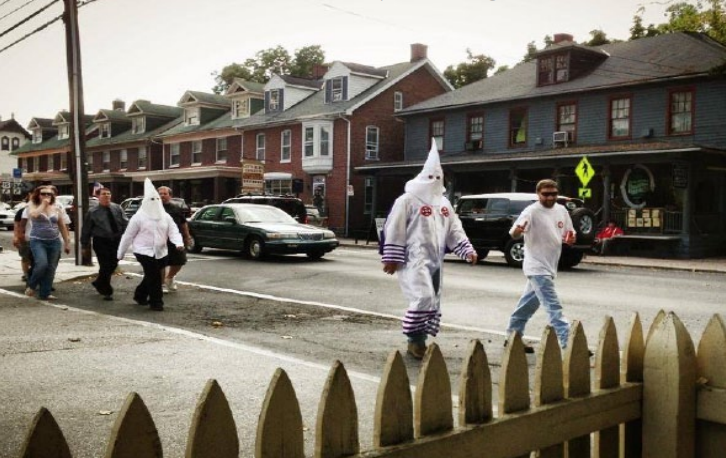 Members of the Ku Klux Klan marched down the streets of Gettysburg on Saturday. Photo Courtesy of Brent C. Talbot

Yells of protest shattered the calm of what was supposed to be a typical Saturday afternoon, October 5th.

“We will not stop,” proclaimed imperial wizard Richard Preston of the Ku Klux Klan. “We will do this every single month.” Shouts were matched by Gettysburg citizens fighting against the demonstration.

One Gettysburg resident, Charles Weise, walked up to the Klan members. “You are not welcome here,” Weise retaliated. “Go home.”

The larger Ku Klux Klan rally that was previously scheduled at the Gettysburg National Military Park for that Saturday had been canceled due to the government shutdown, but that didn’t stop some members from holding a demonstration in town.

Four hooded figures encroached upon the Gettysburg Borough building parking lot at 1 p.m., announcing their future plans to protest the Gettysburg Battlefield next month. The Klansmen then moved onto other topics, such as the Affordable Care Act, immigration, and President Obama’s citizenship.

“It has to stay American in America,” imperial wizard Preston shouted.

At one point after a negative comment from a bystander, the Klansmen stopped and yelled back, “Your parents must be ashamed of you, race traitor.”

Finally at the conclusion of their demonstration, Preston led the gathering in the Pledge of Allegiance.

Just a mile away, another demonstration was taking place at the Lutheran Theological Seminary with a more peaceful message.

The event, titled “Voices of Unity,” brought together local musicians and community members who shared a vision of tolerance and love of humanity. Sponsored by the Adams Unity Coalition, the peaceful gathering was made possible by supplies donated by community organizations and dozens of speakers and musicians donating their time.

Signs decorated the area with messages of peace, such as “civility, not hate” and “Blessed are the peacemakers.”

Jane Peatling of Chambersburg, Pa. was one of the rally-goers who were holding signs during the event.

“It’s important for people of faith to be embracing rather creating divisions,” she stated, “the faith I hold celebrates the unique qualities each person has.”

People of all faiths gathered at the event, including Athar Rafiq, a Muslim citizen of Gettysburg who shared passages of peace and inclusiveness from the Qur’an.

“Voices of Unity” concluded with a musical performance of “Amazing Grace by Emma Rinoff and Jonathan Danchick, followed by “American the Beautiful,” which the whole crowd joined in on singing.

The parting words of the evening were made by Rev. Jeanette Leisk, of St. James Lutheran Church in Gettysburg.

“Lord, make me an instrument of your peace,” she continued. “Where there is hatred, let me sow love.”