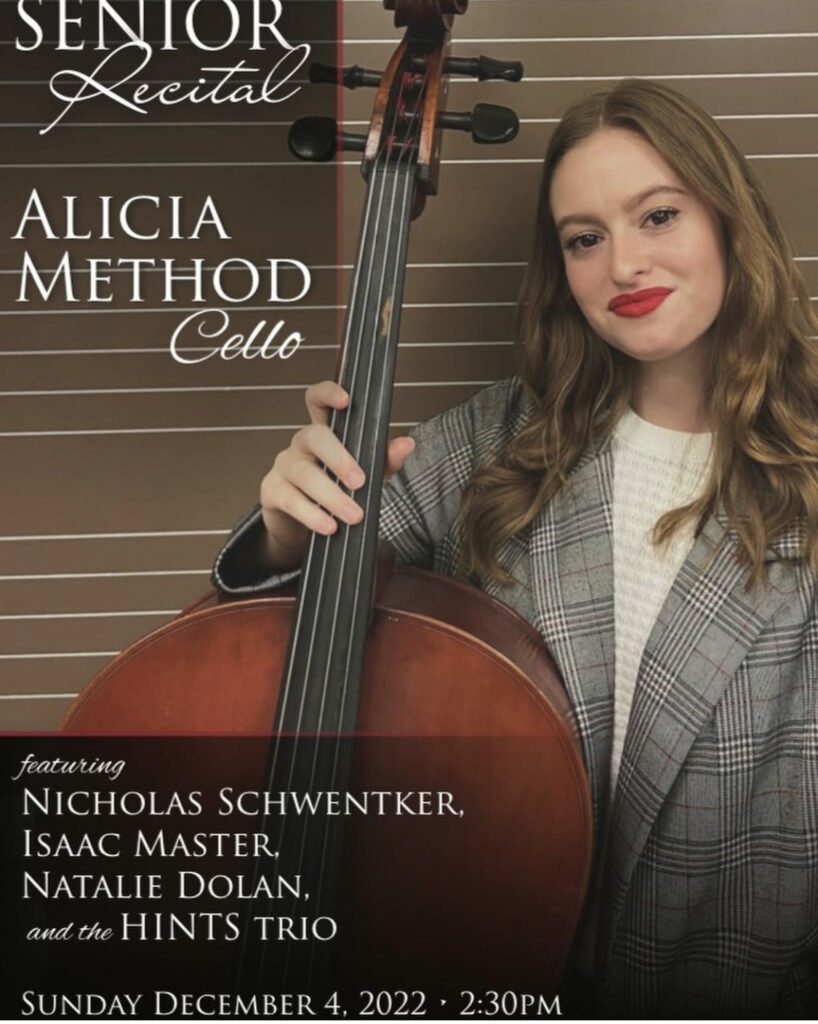 Alicia Method ’23, a double major in music and English, held her senior cello recital on Sunday, Dec. 4 at Paul Recital Hall. Method included pieces from composers such as Bach, Massenet, and Shostakovich, and she also included more recent pieces, such as “The People Could Fly,”  a 2020 composition by Alice Jones.

One of her pieces, titled “Communion,” was written by her friend Natalie Dolan ’23, who accompanied Method on piano.

The piece is based on a poem Method wrote, in which the first movement is a “quiet dissonance,” the second movement is a “disjunct isolation,” and the third movement brings the chaos into a “moment of communion” as all the music becomes one again, ending in the same way that it began.

Method wrote in the program that the poem is based on her struggle balancing her two passions—writing and music—and that while she always planned to pursue writing professionally, music has “brought me to the people around me and has continued to teach me new things about the world and myself.”

Method wrote that she managed to “find a sense of communion here, and this is what I hoped to express with the poem.”

Speaking about her recital, Method noted, “It’s really exciting. I thought I finished my time well, and it was really special to be with those who supported me.”

When asked about some of the obstacles she overcame during her time at Gettysburg, she remarked, “COVID was a challenge since we were doing music online, essentially, and we definitely got creative with Zoom and the recordings. But we didn’t know how long it was going to be, so I’m grateful that we can have some in-person time together, including my recital.”

Method also gave a piece of advice for the first-year and sophomore students inside and outside of the Sunderman Conservatory.

“Have fun and play what you want to play, not what people tell you to play,” she said.

Method is looking forward to her future and said that she’s currently applying to various MFA programs for creative writing and networking for career opportunities. While she noted that she will not be pursuing higher education in music, she said music “will continue to be a part of [her] life.”