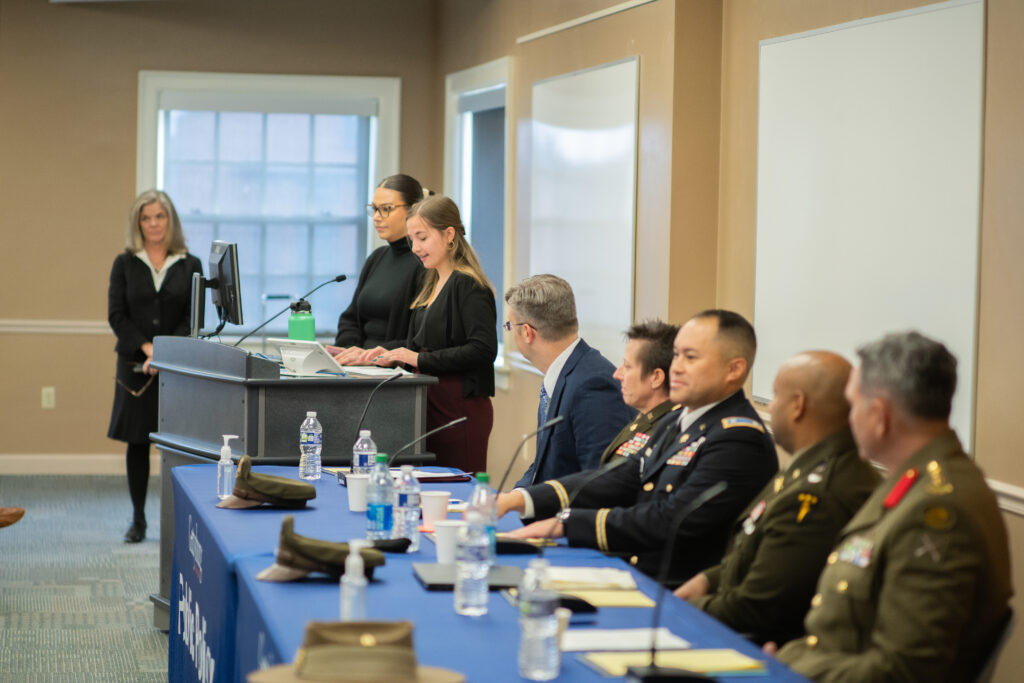 On Friday, the Public Policy Department hosted representatives from the Army War College for a panel discussion as a part of their Eisenhower Series College Program. The discussion occurred at 2 p.m. in the College Union Building. The featured panelists were Colonel Dena Goble, Lieutenant Colonel Nate Minott, Lieutenant Colonel Joe England, and Colonel Tony Bennett.

The Eisenhower Series College Program is a way for military personnel to connect with student civilians around the country. Several students from the Army War College travel to different colleges and give two speeches that they choose. This program begins in the spring of each year, but the Army War College students have come to Gettysburg College for the past two years to test out their topics and get feedback from students here.

Public Policy Assistant Professor Anne Douds and the Public Policy Student Council helped to coordinate with the Army War College for this discussion.

The discussion began with opening remarks by Alli Dayton ’23 and Juliette Rhinow ’25, who welcomed students to the event and explained that Chatham House Rules applied to the discussion panel.

Perkowski explained that each officer on the panel would give a two-minute explanation of their proposed topics, and then the audience could ask questions related to their topics or about other subjects they were curious about.

One panelist began by discussing LGBTQ+ inclusion in the military, especially the challenges during the years of a total ban on queer personnel and the “Don’t Ask, Don’t Tell” years. Then, they talked about the impact that different perspectives have on individuals and how vital empathy is in strategy.

The second officer commented on the economic consequences of a war with China or an invasion of Taiwan and how mandatory education surrounding national service could unify America, especially in the face of a decline in military recruitment and enlightenment.

The next student posed the question of how dangerous drones are in both military and civilian life. The challenge of military recruitment was also discussed by this officer, who believed that increased individualism in American society contributed to this challenge.

The last officer discussed the significance of partnerships in the Indo-Pacific region and the impact of the whole-of-government teams in government agencies.

After the officers explained the topics of their speeches, questions from the audience began.

The first question posed was what an officer on the panel’s opinions were about the United States’ policy on preserving a free and open Indo-Pacific. The question also asked the officer to evaluate how successful the U.S. was in implementing that policy.

The officer answered that they felt the United States has a shared interest with other countries, specifically in the Indo-Pacific region. The recent security pacts with those nations and others, such as the AUKUS deal, are very positive steps and have an immediate impact on keeping the Indo-Pacific free. The officer felt that the U.S. was doing a very good job in its policy, especially because of the advancements that have been possible through U.S. partnerships.

The question that followed was asked to the entire panel about whether the officers saw any emerging blocks on the United States from other countries as the nation leaves the Cold War Era. A follow-up question was asked on how the U.S. should deal with those blocks.

One officer commented that the environment has changed in the Indo-Pacific, and China has become a predatory nation with its coercive policies. China is seen as the reference point for what to prepare for and strategize against.

Another officer added that things have not changed much since the Cold War, and thus many countries harbor the same ideas and beliefs they did back then. For example, nations like Russia are working to subvert other countries to obtain more power. The officer then explained how dealing with this subversion almost always leads to conflict, and so the United States must be very delicate in its approach.

The next audience member asked about the officers’ experience of working with Japan.

An officer stated how Japan is viewed as a close ally and vital in working on keeping the Indo-Pacific region free and open. Another officer commented on how Japan is a particularly strategic ally thanks to its location and innovation.

The next question was about the economic consequences of a war with China, specifically, if an officer believed that there would be a shift in taste to American manufacturers if a war were to happen.

The officer commented on how reliant the U.S. industrial complex is on China and Taiwan. If industries were cut off, then consumers would possibly not have a choice to switch to American manufacturers.

An audience member then discussed the recent war in Ukraine and questioned what lessons the United States has learned from Ukraine’s and Russia’s use of drones in combat.

One officer explained that the United States has seen a lot of counter-fights with drones or unmanned aerial vehicles (UAV). According to the officer, there needs to be more work done on training civilians to recognize and deal with UAVs.

A follow-up question was posed on how civilians can defend against UAVs.

The same officer compared the possible treatment of UAVs to cars. For example, there are specific places where cars are and are not allowed to be. This officer proposed this same type of system for UAVs, where they should be allowed in some areas and not allowed in others. The officer did note, however, that there is a lack of current technology to locate UAVs, and that more funding should be invested into tracking them.

The next question asked how the United States should appropriate “sandbags” to the economy so it is not as affected by foreign powers. This member of the audience added to the question, asking how the U.S. could do it wisely so that the economy would not revert to protectionism.

An officer answered that it is very difficult for U.S. industries to protect themselves against unfair regulatory practices imposed by China. It was recommended that one of the ways to avoid protectionism is to force a partnership agreement with traders. 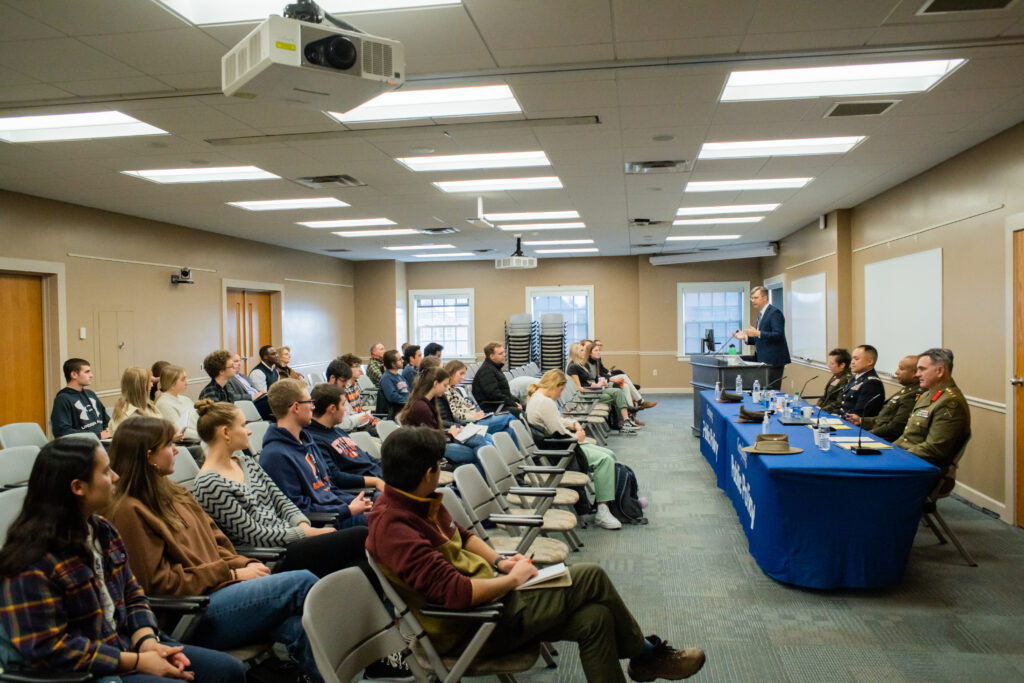 On Friday, Dec. 2, 2022, the public policy department held a panel of representatives from the Army War College (Photo Will Oehler/The Gettysburgian)

The next line of questions had to do with the LGBTQ+ community in the military.

One audience member asked the officers if they believed that queer military personnel were able to find a community in the military.

The next question asked if an officer had any insight on how increased acceptance of LGBTQ+ persons had any impact on increased rates of sexual assault in the military.

The officer answered that they had not viewed any research on the topic, but that they did not believe there was a correlation. It was mentioned, however, that the military is a reflection of society, so there are similar problems.

The following question asked what the officers’ believed motivated LGBTQ+ soldiers to stay in the military throughout the challenging years when they were not accepted.

One officer explained that the sense of community and tight-knit bonds made in the military, in addition to the hope of making the military a more open and accepting organization, caused many to stay.

A topic change then occurred, with an audience member asking about the officers’ thoughts on Sweden and Finland joining the North Atlantic Treaty Organization (NATO).

An officer answered that there were two ways of looking at the additions to NATO. One way is with a fear of the expansion and with the belief that it would lead to conflict. The other, however, is with a feeling of consensus of understanding the world order and that more and more nations are agreeing on what is acceptable versus what is unacceptable.

The same audience member then asked the panel about their opinions on plans regarding the United States and India.

A different officer answered that the U.S. and other nations are working toward a strong relationship with India as the nation shifts away from China.

The next question brought the discussion back to the war in Ukraine and specifically asked the panel what they believed the future of the war would be like.

An officer answered that they saw an increase in the proxy war and a guaranteed continued conflict. They do not believe an ending will be in sight until all parties involved can converse and work out an agreement.

Questions then turned to the evacuation of Afghan refugees from their country and how that process went.

An officer commented that it was very difficult for everyone involved. It was challenging placing families, and for families to adjust to the new country they found themselves in. Each refugee dealt with the transition differently. The path to citizenship is also unclear for these refugees, as regulations are still being worked through Congress.

In a similar question, an audience member asked how the Syrian refugees affected the refugee crisis in the United States and the world.

One officer mentioned that the refugee crisis was a humanitarian crisis felt all around the world, but that it was mainly handled by other organizations such as the United Nations and non-governmental organizations.

The next audience member asked about the United States’ role in the Yemen Civil War and what America’s policy should be going forward with Saudi Arabia.

An officer answered that in the past the United States acted upon who they believed were supporting the rebels in Yemen. Thus, support was given to Saudi Arabia through the selling of technology. Based on current concerns, the United States should balance what is within its values and interests and whether or not to give support.

The questions then turned to topics previously presented by officers. Audience members asked about what research has been done on why there is lower recruitment.

The officers answered that there appears to be a knowledge, trust, and identity gap between civilians and the military. Generation Z, who is the primary age of recruited individuals, tends to view the military as very contentious due to widely debated conflicts in the Middle East.

One officer mentioned how there is no exact answer to solve this issue, but that they believe a mandated education on national service could increase recruitment and bring a sense of unity to the nation.

The next question asked about the culture of the military and the effect extremism has had on recruitment, particularly since the 2016 election.

An officer commented that they have a concern about extremism affecting recruitment, especially after the January 6th insurrection where insurrectionists were seen wearing military uniforms. Within the military, extremism is not tolerated and swiftly dealt with.

Then, an audience member asked the panel their thoughts on the China Belt and Road Initiative and if they feel it is a threat to national security.

An officer answered that they felt the initiative is very helpful to many struggling areas and nations and that China is taking a risk other countries are too cautious to take. However, an issue arises, as China is very predatorial and there needs to be global pushback on that behavior. The officer does not see military involvement as the solution.

The moderator then thanked the audience for their participation during the discussion panel and invited them to ask any informal questions to the officers following the formal session.

Editor’s Note: Given the Chatham House Rules, this article contains only paraphrased information given during the discussion. No identities nor affiliations of the speakers, nor that of any other participants, will be mentioned or revealed.