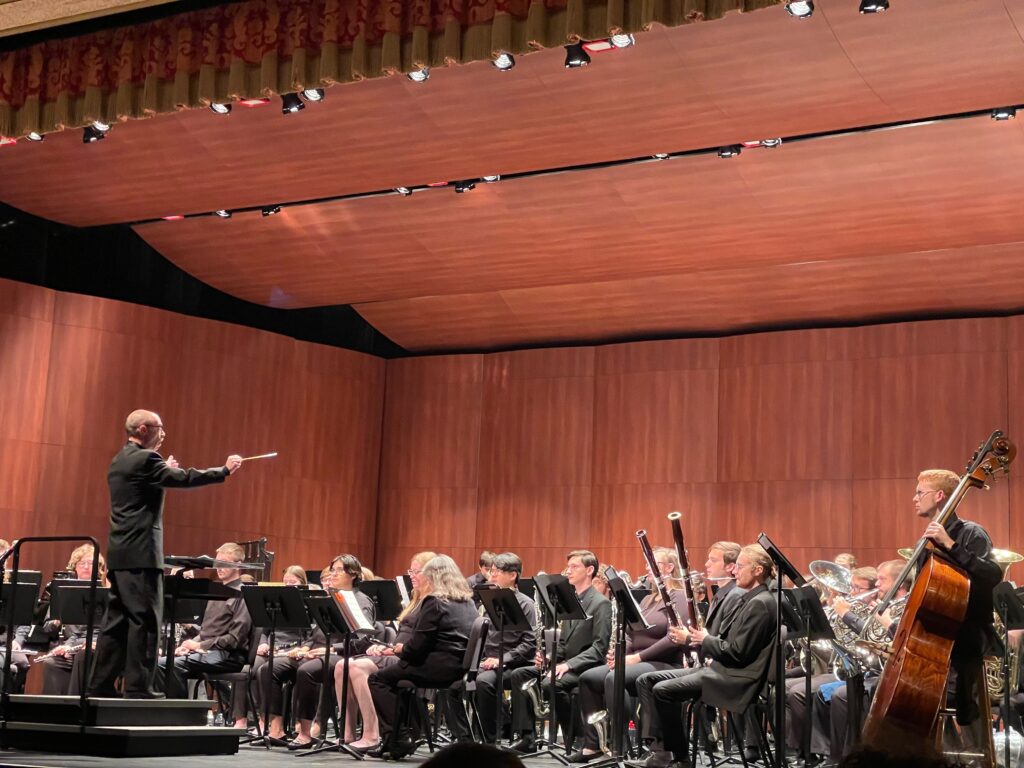 Sunderman Conservatory Wind Symphony performs part one of their “Made in America” concert on Friday, Nov. 18, 2022 (Photo Victoria Staub/The Gettysburgian)

On Friday, the Sunderman Conservatory Wind Symphony performed at the Majestic Theater. This performance is the first half of what the Conservatory is calling “Made in America” which is composed of pieces from not just the United States, but from all over the Americas, including North, Central and South American countries. Part two of this performance will occur on Dec. 2 with the Symphony Orchestra. Both of these symphonies will be traveling to the Baltics this winter break to play a combined performance of the entire “Made in America” set.

This tour will bring both Gettysburg students and community members that are part of the symphonies to Latvia, Lithuania, and Estonia. This is the third international tour for the Wind Symphony and the first for the Symphony Orchestra. While on tour, the ensembles will perform five concerts.

Friday’s event was conducted by Dr. Russell McCutcheon who serves as the Sunderman Conservatory of Music’s Director of Bands and Professor of Music. Owen McGowan ’23 also played an entire euphonium solo alongside the supporting wind band in the third piece of the night “Concertino for Euphonium and Wind Band” composed by Rolf Wilhelm. McGowan played all three movements at the Majestic’s center stage. He was awarded this opportunity for winning the Conservatory’s Concerto Competition earlier in the semester.

These pieces, particularly “Three Latin American Dances” and “The Stars and Stripes Forever,” certainly assisted in evoking the theme of the concert: the Americas. While most Americans can easily pick out “The Stars and Stripes Forever,” its role of ending the night truly brought forth a patriotic wave within the audience as heads bopped back and forth in recognition of the anthem. “Three Latin American Dances,” on the other hand, was far more cultural. The piece was composed of three movements titled “La Moto,” “Lamento Cubano,” and “El Zape.” Each movement represented a different Latin American country and story associated with the composer, Giovanni Santos. These countries and situations were the busy streets of the Dominican Republic, an escape from Communist Cuba, and a festive Mexican party, respectively.

While this concert will not occur again in the United States, the second part of the Made in America concert series has yet to occur, so be sure to stop by the Majestic Theater on Dec. 2 at 8 p.m. to enjoy the Symphony Orchestra before their send off to the Baltics this winter break.