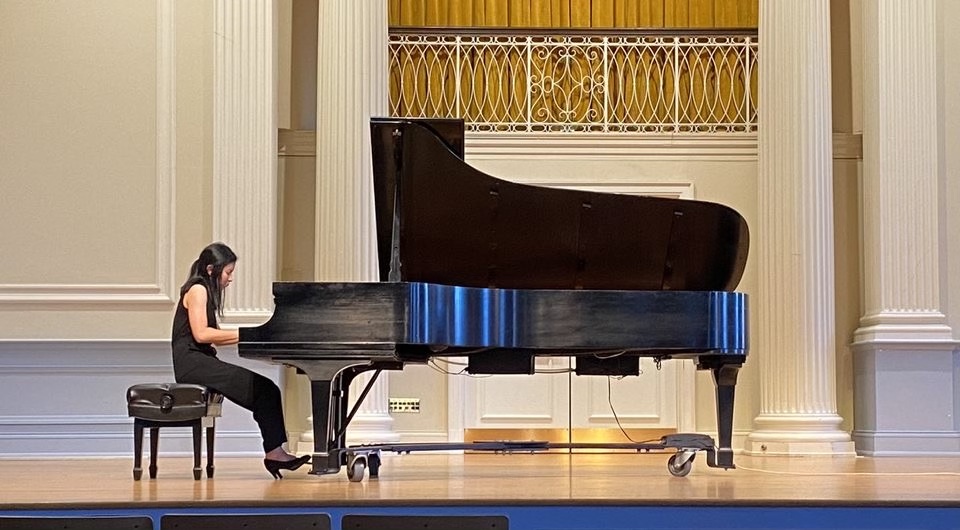 On Saturday, pianist and piano professor at Pennsylvania State University Melody Quah performed a guest recital in Paul Recital Hall. Quah is an accomplished pianist who is described as a “poet with titanium fingers,” in the program for the performance.

The first piece Quah played was “Chaconne in D Minor,” which was arranged by Ferruccio Busoni after Bach’s Violin Partita No. 2. Next, Quah performed “Crossings” arranged by Malaysian composer Adeline Wong. Wong’s version of this piece takes inspiration from the more humorous and spirited parts of this popular piano piece. The title “Crossings” references the crossing of the pianist’s hands as they perform the piece. The first half of the performance closed by Quah playing “Homenatge,” which is composed by Cuban-American composer Tania León. “Homenatge” paints a picture of Cuban traditions and heritage.

Quah’s performance resonated with the students who attended.

“It was just really great to have a guest pianist to come in, and [for] the piano students of the Conservatory to see a performing artist,” Jess Schaefer ’24 said, “Her playing was super clear. It was a beautiful performance.”

“I really loved how diverse the repertoire was. I think it was really really amazing to get to listen to musics that were commissioned recently from other cultures and to see how other cultures perceive music,” Delaney Mavica ’24 said.

Quah has performed in Asia, Europe, and North America. Quah has competed in competitions such as the 7th International Paderewski Competition, where she was a prizewinner. Quah has also performed at Weill Hall at Carnegie Hall and soloed in symphonies and orchestras internationally.

Quah is also actively working to “diversify the piano repertoire.” She has commissioned Malaysian composers, such as Adeline Wong, whose work she performed at the recital held here. Quah will collaborate with Canadian/Iranian composer Parisa Sabet for one of her upcoming projects in this field.

Quah shares her music through community events by giving presentations at senior living communities and schools and performing at benefit concerts.

Quah attended high school at the Australian Institute of Music in Sydney. She would further her education by receiving her Bachelor of Music from Vancouver Academy of Music, graduate degrees from Yale School of Music and Julliard School, and Doctor of Musical Arts degree from Peabody Institute of Johns Hopkins University.

This remarkable musical journey for Quah started when she was just two years old.

“I started playing by ear when I was like two years old,” Quah said, “I started lessons when I was six years old, so it feels like [I’ve been playing] my whole life.”

Quah shared that she loves playing the piano for multiple reasons. One of these being that the piano is an instrument that doesn’t need accompaniment.

“You can play melody and the chords, and you can feel like you’re an orchestra just on the piano,” Quah said.

Another reason Quah loves playing piano is because of the connections she makes through teaching and performing.

“Oftentimes you just have unexpected encounters, and I think as a musician, you can have those in all kinds of places and all kinds of settings,” Quah said.

Of the pieces Quah played at the Gettysburg recital, her favorite is “Kreisleriana Op. 16.”

“There are some soft lyric sections, some stormy passionate ones. You kind of get a little bit of everything,” Quah said, “I’ve been studying that one for a while, and it feels like a never-ending project because there is always so much to uncover.”

Quah gave some advice to fellow musicians who may be worried about how to navigate their lives. “I think as musicians, sometimes our path is not as straightforward,” Quah said, “My mother always told me to enjoy the journey. . . . Really that’s such a true thing to stick by, so if you can do that, I recommend it.”