Home » Opinions » Opinion: Apathy Toward Voting Plagues the Political Left, and it’s to Blame for the Overturn of Roe v Wade.

Opinion: Apathy Toward Voting Plagues the Political Left, and it’s to Blame for the Overturn of Roe v Wade.

The previously unthinkable happened. Roe v. Wade, the landmark 1973 Supreme Court decision that protected abortion rights at the federal level, now, in 2022, abortion is no longer legal in countless states, with many more considering serious restrictions or outright bans. On June 24th, 2022, the decision by the Supreme Court to overturn Roe v. Wade was announced, putting reproductive rights in jeopardy for millions of Americans. When the draft of the Dobbs decision was leaked in May, my first thoughts were of shock. How could this happen in 2022 in the United States, a country that is supposed to be a beacon of freedom? How can such a deeply unpopular ruling become the law of the land, just like that?

It happened because of apathy from left-leaning voters. The U.S. has a two-party system, meaning it is almost impossible for political parties other than the Democratic and the Republican party to win statewide or national elections. This is far from ideal. The two-party system is heavily flawed and understandably demotivates left-leaning voters. It sometimes may even feel like our vote doesn’t matter or that neither party fully represents voters. A common notion held by many eligible voters, particularly those on the left, is that the Democratic and Republican Parties are just two sides of the same coin and neither party actually cares about voters. While I empathize with left-leaning people who do not feel adequately represented by the Democratic party, it is vital that voters still turn out on election day. Left-leaning voters cannot let this stop their votes from being cast for the Democratic Party.

Until there is significant change to our electoral system, the Democrats are our best chance at defending our basic rights. The belief that Democrats and Republicans in government are the same is a dangerous mischaracterization of American politics; saying so discourages those on the left from voting and allows the right to implement their unpopular and dangerous agenda.

In July 2016, the Supreme Court ruled on a restrictive Texas abortion law, striking it down. Speaking about this ruling, Hillary Clinton, then Democratic nominee for president, said the following: “But the current political battle being waged over filling the current vacant seat on the Supreme Court—and the fact that our next president could appoint as many as three or four justices in the next four years—are striking reminders that we can’t take rulings like today’s for granted.”

Hillary Clinton predicted and warned of the consequences of a Trump Presidency over five years ago. In his four years in office, like Clinton suggested, Trump was able to nominate 3 justices to the Supreme Court—Gorsuch, Kavanaugh, and Barrett. All three of these justices voted to overturn Roe v Wade, just as Clinton predicted. The fact is that if voters sent Clinton to the White House in 2016, abortion would still be legal and accessible in all 50 states.

Instead, election after election, left-leaning voters stay home, thinking their vote doesn’t matter and that the Democratic party is useless. Donald Trump won the election, despite his unpopular persona, behavior, and actions. Apathy handed Trump three supreme court nominees, which he used to pack the court with out-of-touch justices that use the court to push their conservative agenda. Now, reproductive rights are gone in countless states. Here in Pennsylvania, if Republican gubernatiorial candidate Doug Mastriano wins his bid in November, I can almost guarantee that abortion rights will disappear in our state. The only thing stopping Pennsylvania from becoming the next state to enact a radical abortion ban is the election of a democratic governor in November.

I know the Democratic Party is flawed, but putting Democrats in power is the only thing stopping Republicans from continuing to enact their radical agenda. Please vote in November. When you fill out your ballot, remember which party vows to protect reproductive rights and which one vows to attack reproductive rights. Our rights are, quite literally, on the ballot.

Register to Vote in Pennsylvania: https://www.pavoterservices.pa.gov/pages/voterregistrationapplication.aspx 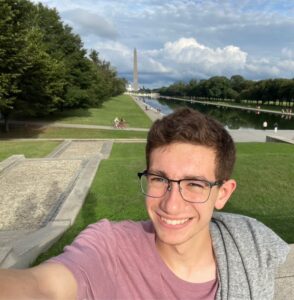