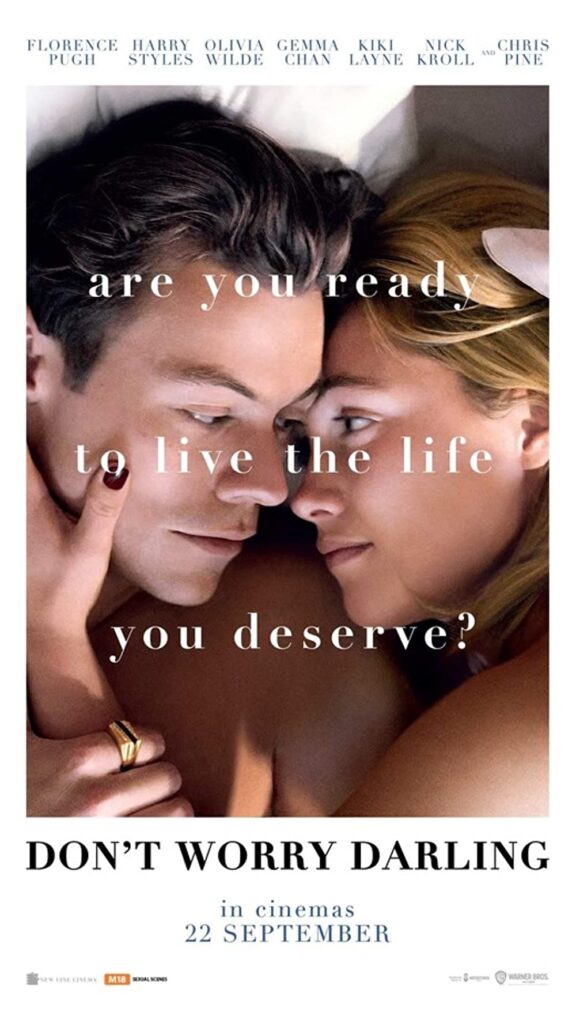 After the undeniable success of the directorial debut that was Booksmart, all eyes were on director Olivia Wilde for her next project. Wilde, who was an actress before she took the plunge into being behind the camera, announced “Don’t Worry Darling” in Aug. of 2019. The cast was then announced in Apr. of the following year, with Florence Pugh, Shia LaBeouf, Chris Pine, and Dakota Johnson starring. With some fuss, the cast has since been altered.

The most prominent controversy was surrounding Shia LaBeouf. In Sept. of 2020, it was announced that pop-phenomenon Harry Styles would be replacing LaBeouf in the lead role. Later, in 2021, it was announced that Styles and director Wilde were in a relationship, which led to many questioning if Styles was cast due to talent or other factors (i.e. being in a relationship with the director). This debate has only intensified following reviews of his poor performance in the movie. Additionally, Wilde began her relationship with Styles after ending her 7 year engagement with fellow actor Jason Sudeikis, with whom she has two children. There were many concerns about cheating or if Wilde ended the engagement to be with Styles.

Regardless of what happened, this was just the start of the drama. When it was originally announced that Styles was replacing LaBeouf, it was allegedly due to scheduling conflicts. Then, in Dec. 2020, LaBeouf was sued by his ex-girlfriend FKA Twigs, a musical artist, for sexual battery, assault, and emotional distress. The lawsuit also includes abuse he inflicted on another ex-girlfriend, stylist Karolyn Pho. Then, In 2021, Wilde spoke out and said she fired LaBeouf for his tendency to clash with the cast and crew and overall, his poor behavior.

That was not contested until Aug. 2022, nearing a month before the film was set to release. LaBeouf announced that he actually quit the film because he believed it was being mismanaged. He also released video footage through Variety where Wilde asks LaBeouf to stay and refers to one of the main stars, Florence Pugh, as “Miss Flo.” The public was quick to point out that her usage of that name seemed very degrading, sparking rumors that Pugh and Wilde did not get along. Wilde was not done, however, and refuted LaBeouf’s claims through an interview with Vanity Fair. She stated once again that she fired him, adding that it was due to Florence Pugh, expressing she was uncomfortable with LaBeouf’s behavior. LaBeouf once again produced evidence that questioned Wilde’s claims, this time releasing texts between him and Pugh in which they seem very comfortable with each other, but have some issues with the direction of the film. Pugh did not comment on any of this.

In fact, Pugh has not commented much on the film at all. Fans of the actress have noted that she has not posted for “Don’t Worry Darling” on her social media, which is something she has done for all her previous films. Pugh also dropped out of all promotions for the movie except at the 79th International Venice Film Festival. The reason for this was cited as scheduling conflicts due to her filming “Dune: Part Two,” but many suspect the real reason is her dislike of Wilde.

Dakota Johnson, one of the original stars, also dropped out due to scheduling issues with her other movie, “The Lost Daughter.” At the time, this was announced smoothly, but now there are questions about whether she also had issues with the film as well.

The next big event for “Don’t Worry Darling” was its premiere at the 79th International Venice Film Festival, the one promotion that Florence Pugh would be attending. This event happened on Sept. 5, 2022, and carried the same amount of drama that the production of the film saw. Pugh arrived late and did not participate in the movie’s panel, and there was an overall palpable tension between cast members that was very evident to all watching.

Wilde and Styles, who are in a relationship, showed no real interaction and in fact, never stood or sat next to each other. Additionally, there was a viral video from the Festival that appeared to show Styles spitting on Pine. Both Styles and Pine have denied this incident, but the Internet has run with it. Styles was also criticized for the answers he gave during the press panel. One quote from him is “The thing I like about the movie [‘Don’t Worry Darling’] is that it feels like a movie.” This did not help him beat the allegations that he is not fit for the leading role in the film, especially because Chris Pine looked exasperated at his answer.

The big thing to take away from the Festival, however, is the reviews. This was the first time that “Don’t Worry Darling” had been shown to an audience, and it has, so far, not fared very well with critics. It currently has a 36% rating on Rotten Tomatoes, a 48% rating on Metacritic, and a 4/10 rating on IMDB. Some have theorized that the bad reviews are largely due to all of the drama that has surrounded the film, but the only way to really know is to see “Don’t Worry Darling” for yourself. Its theatrical release is this Friday for all those who wish to make their own opinions on the movie.