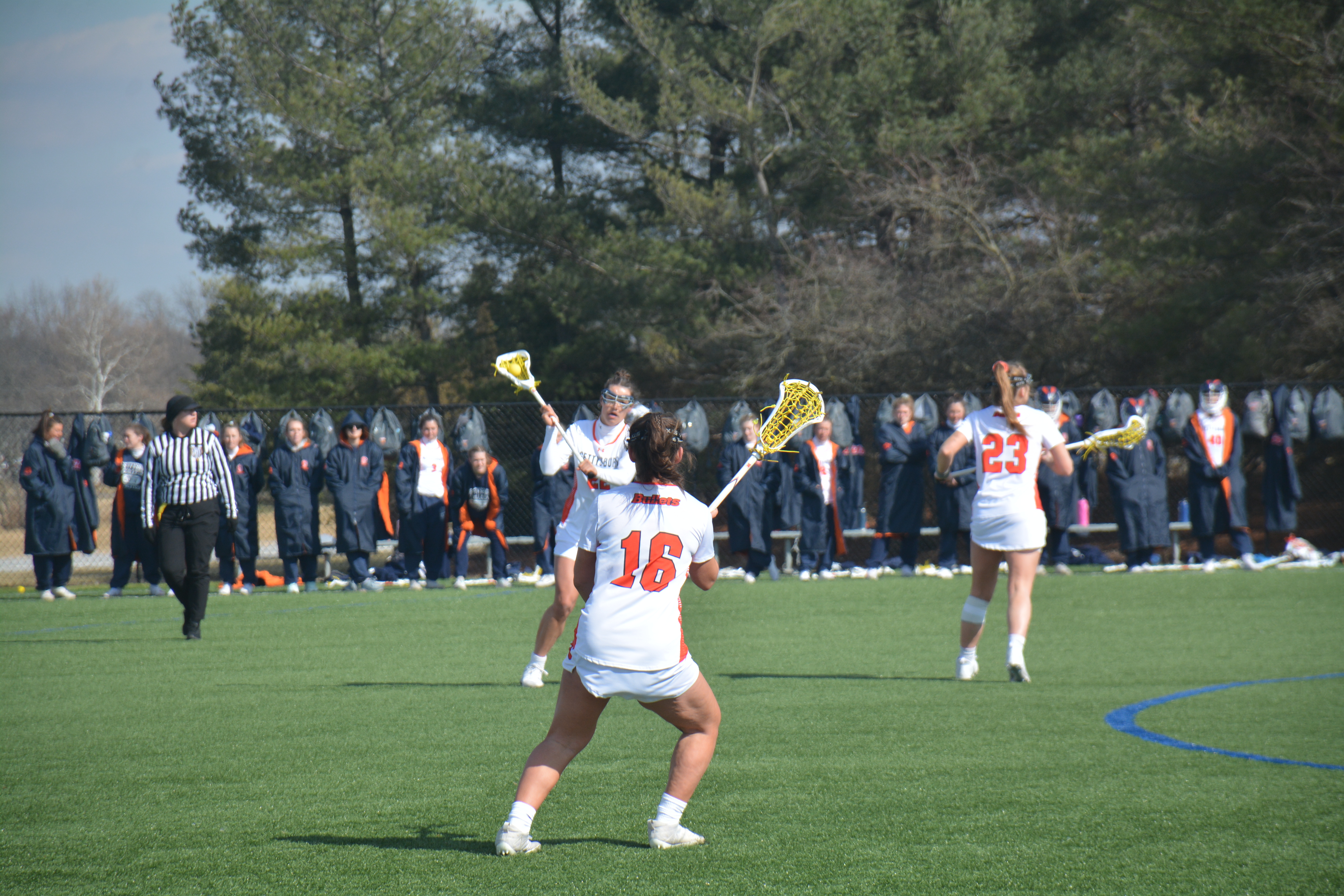 The women’s lacrosse team rolled past No. 2 Franklin & Marshall Wednesday, April 20th, making them 6-0 in the Centennial Conference. Led in scoring by junior Katie Fullowan, the Bullets took the Diplomats down by a score of 13-7.

The balanced scoring attack in the first quarter was commenced by Caroline Sullivan ’24 as she laced one into the net just 46 seconds in. Senior Marissa McGarrey struck less than a minute later for the Diplomats.

Sullivan and Jordan Basso ’24 charged the Diplomats’ goalie Emily Kitchin, each tallying unassisted goals to make the score 3-1 with nearly 13 minutes left in the quarter. However, Franklin & Marshall would not budge. They added on two quick goals of their own before sophomore goalkeeper Gill Cortese could swing the momentum back to the Bullets, stuffing an attempt by Lydia Cassilly.

Before the buzzer blew to mark the end of the quarter, the orange and blue were able to tack on two more goals, compliments of Basso. Her scoring success was supported by an outstanding defensive effort. The Diplomats scored again with four seconds remaining, sending the teams back to their benches with a score of 6-4, Gettysburg in the lead.

The second quarter did not see the same exciting scoring runs of the first. The first 11 minutes were mostly scoreless, marked only by a single goal from Gabi Connor ’23 off an assist from Basso. This time featured remarkable saves from Cortese allowing the Bullets to keep a 7-4 lead.

The goalkeepers on both ends of the field held steady heading into halftime, allowing one shot in each before time ran out. Gettysburg went into the break with the 8-5 advantage over Franklin & Marshall.

The same balanced scoring effort followed the game into the third quarter. Each time the Diplomats attempted to decrease the deficit, the Bullets met their efforts and topped them. The two goals scored by the Diplomats during the quarter were nullified by Katie Fullowan, who tallied two of her own. Essie Pasternak ’23 ended the quarter nicely with a late goal, assisted by Fullowan.

Fullowan sealed the game in the fourth quarter, adding two more goals to the Bullets’ total. She was reinforced by a strong defensive effort from her teammates as the Diplomats were held to just three shots, two reeled in by Cortese.

The Orange and Blue dominated the stats, leading in shots taken, draw controls, and ground balls. Individual success was seen across the Bullets’ roster. Fullowan has scored three or more goals in eight of the season’s 14 games. She has 43 total on the season. Basso, just shy of 100 total points in her career, has added four points of her own in the past seven games.

The Bullets remain undefeated in conference play after picking up a win against Muhlenberg after recognizing their seniors Saturday, April 23. They have an additional two regular season games Wednesday the 27th and Saturday the 30th before they look to host the Centennial Conference championships May 4-8.