Review of “Eternals”: Do We Really Need More Superhero Movies? 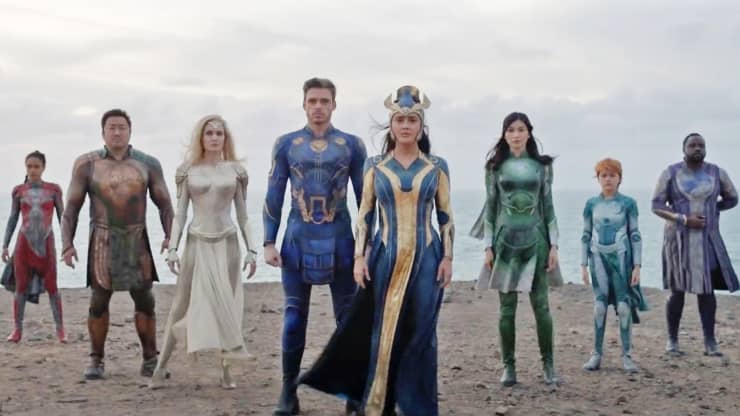 Making over $400 million at the box office this past November, Marvel’s Eternals became the tenth highest grossing film of 2021.

The movie, headed by Best Director Oscar-winner Chloe Zhao, had a notable ensemble cast, led by Gemma Chan, that included many fan-favorite actors: Richard Madden, Salma Hayek, and even Angelina Jolie all stepped up and donned the brightly colored metallic tracksuits that are, for some reason, the Eternals’ costumes.

Despite all of the star-power both in front of and behind the camera, the film makes it painfully obvious that Marvel is running out of ideas. I don’t know what I expected, though it is, after all, the twenty-sixth installment in the Marvel Cinematic Universe.

Any franchise would be struggling once they hit their mid-twenties. They should be struggling. However, if the market exists for twenty-six superhero movies, they better be damn good. Anything formulaic should go out the window at this point.

Eternals, instead, hinges itself on cliches. One of the superhero’s powers is that he can fly, for God’s sake. Even the characters’ names are aggravatingly simple. While they have some outlandish backstory if you dive deep enough into the comic books, the average movie-goer is forced to sit through a film with thinly veiled mythological references. Thena, a strong female warrior, is only one letter away from her Greek inspiration. Not even named after someone from a different religion, Ikaris lives up to his name and, spoiler alert, literally flies into the sun.

The Eternals, despite being immortal aliens, follow every human trope imaginable. They each have superpowers that make them unique but, within a few minutes, we get the gist. They’re strong, they butt heads, they throw heavy things at each other, then they kiss and make up.

After watching some of today’s most famous actors walk around in clunky superhero costumes for a few hours, I began to wonder if we really need more superhero movies. Aren’t we close enough to thirty films to exhaust any genre?

My question comes at an important time in the Marvel Cinematic Universe, or the MCU. Still reeling from Oscar-winning director Martin Scorsese’s comment that superhero movies aren’t cinema, Marvel fans were thrilled at the releases of Black Widow, Shang-Chi and the Legend of the Ten Rings, and Spider-Man: No Way Home these past few months. They now patiently await the lineup of sequels already slated to premiere this year, including Doctor Strange in the Multiverse of Madness, Thor: Love and Thunder, and Black Panther: Wakanda Forever.

What was once a comic book company is now an ubiquitous movie franchise worth billions of dollars that would be exciting if the movies were any good. After watching The Eternals, I am not convinced there’s a need to continue funding these blackholes—an apt term to describe these Marvel films that have the power of a bunch of stars behind them yet still drain energy (and money) from everything around it.

I guess that, at some point during the film, I realized that I have spent so much time watching a grown man run around dressed in a superhero costume these past few years. I have been finding it harder and harder to care about what happened to Spider-Man or Yelena Belova. The only thing on my mind when I see adults say a corny line about believing in yourself and then pretending to fly is “Do we need more superhero movies?”