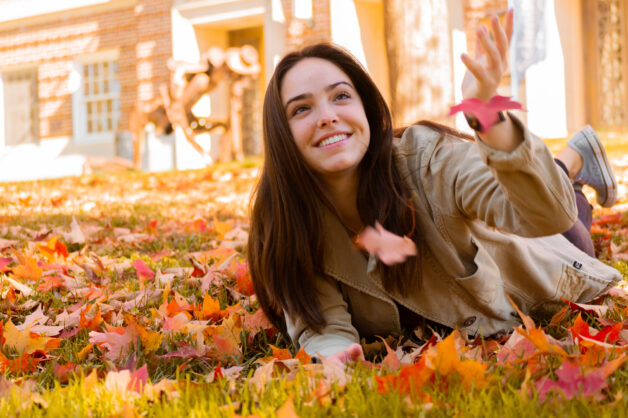 Alexandra Charney ’22, a music education major with a peace and justice studies minor, performed her senior recital on Oct. 30 at the Paul Recital Hall. The mezzo-soprano included selections from a variety of genres, such as a set of Spanish carols that included a piece in the Basque language, and a feisty French aria from Charles Gounod’s 1867 opera Roméo et Juliette. Charney spoke on which piece from her recital program she enjoys performing the most.

“They are all so different, but I really enjoy the Bolcom Cabaret Songs because I love musical theater. I decided to start with this set because it showcases both my acting and my technique, because both the vocal range and the range of expression are pretty extreme for those pieces.”

“Amor,” the last of the four selected Cabaret Songs with which Charney opened her recital, was an evident crowd-pleaser. Relying heavily on her acting abilities, Charney fused her musical style with light-hearted theatrics to embody the character of the song.

Charney says the most rewarding piece to perform is “Astonishing,” a song featured in the Broadway musical “Little Women.” The piece, which she also performed four years previously at her senior recital in high school, remains very impactful to Charney.

“I feel like I’m taking on a new meaning to the song as I’m graduating college, and it shows how much I’ve grown from when I first sang it to now,” Charney said. “There’s so much to look forward to, and the message of the song is to not be afraid to go out into the world and take risks and do what you want.”

Charney’s father joined her on the stage for this song, accompanying her on the piano. Calling him “her musical rock,” Charney dedicated “Astonishing” to him and to the rest of her family. This emotional, passionate song of self-belief and determination was the final piece Charney performed at her recital, and received a rousing, minutes-long standing ovation.

Reflecting on her involvement with the Sunderman Conservatory of Music, Charney said that the people, especially the professors, she has gotten to know are the most impactful part.

“The professors treat you like adults, and they like to challenge you, but they also get to know you on such a personal level. I think that is really unique to this school… I came here, and I never felt so comfortable in an audition situation. You work so closely with the teachers, and you wouldn’t have that opportunity in a bigger school.”

Charney also offered some sage advice for future conservatory students: “Have a strong philosophy for why you are pursuing music. In the conservatory, you can get so caught up in the work and the practicing for competitions and performances … remember you are doing it because you love it. Take a break, sing something for yourself, or play an instrument for yourself.  Remember why you are doing it, and don’t lose that joy.”

Following graduation in the spring, Charney hopes to participate in the Fulbright U.S. Student Program. She will hear back in the beginning of March to confirm if she has been selected.  Her plan is to study Herero music in Namibia, a country in Southern Africa.

“The first component of the project would be to interview people about the music style and record it to be placed on a public digital archive,” Charney explained. “The second component would be to work with the music faculty at University of Namibia to create curriculum plans for secondary music education in the United States.”

Charney’s eventual hope is to attend graduate school and teach music education at the college level.