Home » Magazine » Opinion: It’s On All of Us

Opinion: It’s On All of Us 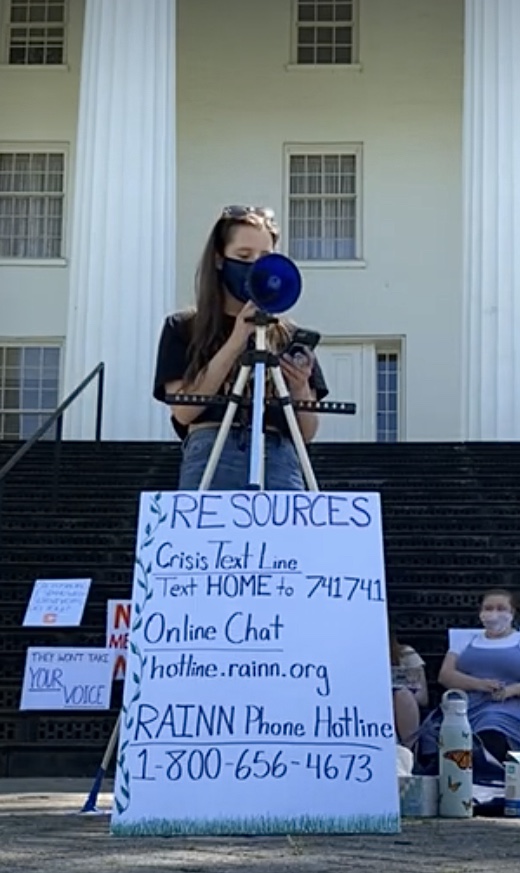 And with that, we went the long way around so we wouldn’t have to see the folding tables, the t-shirts, and the people from the Title IX Office. It’s always been hard to see these types of events put on by the school. The events where they look you in the face with a plaster-smile proclaiming that “We believe survivors!” when two years prior, they told you that there was nothing that they can do about your rapist. It’s patronizing, a slap in the face.

It was even worse to see certain men wearing those t-shirts. They are the very same men who have grabbed me at fraternity parties, the men who loop around the block in their cars to catcall me and my friends, the men who persist despite I repeatedly say “no.”

I feel that same anger when I see those “Not in Our House” flags flying at the fraternity houses. I’ve seen that flag on the flagpole at the house where I met my rapist, as well as at the house where one of my friends was raped by a brother and at the house where another friend was groped repeatedly by a fraternity member.
I have had numerous people confide in me the assaults that they have experienced at Gettysburg. Some of them are not in Greek life, while others are actively involved in their sororities and fraternities. They have told me that their trust in the investigation process and the overall college response to sexual assault is so broken, many of them have chosen to not report at all. They point to factors like long investigations, fear of not being believed by the Title IX Office, possible ostracization from their sisters or brothers, and other various reasons for not coming forward. That trust, that survivors will be believed and that their cases will be handled with expediency, is absolutely crucial to fostering the caring campus community that Gettysburg likes to advertise.

Since co-founding the Survivors of Gettysburg activist organization, I have noticed a change in the way we have these conversations on campus. Friends, classmates, and strangers alike are slowly coming forward with their own secrets and stories. I feel like there’s more openness among my peers, a growing willingness to learn more. But while we have posted over one hundred of these stories, there are many more experiences that have gone unshared, unspoken.

But this change hasn’t been reflected by the college administration or the Greek organizations on campus. There’s still apathy in some communities on campus, as many of my friends involved in Greek life have expressed frustration with the apparent performativeness of their organizations’ efforts to address sexual assault. While there’s been more openness about our sexual assault problem, it must be followed with substantial policy changes by Gettysburg College in order to fully realize a safe school environment for its students. Marginal changes are not enough. It’s easy to have some roundtable discussions a few times a year, a presentation here and there. Performative activism where the college can pat itself on the back for a job well done is insulting to survivors.

I want to see significant, concrete change. And I want to see those changes in Gettysburg’s Title IX policy, orientation programming, Interfraternity Council programming, Panhellenic programming, and the Title IX office itself. It is absolutely crucial that rape survivors are at the forefront of this conversation. We demand to be seen. We demand to be heard. Rape and sexual assault survivors are the students who will be the most impacted by these measures, and we deserve to have a say in this policy-making process.

Even if you yourself haven’t experienced sexual violence at Gettysburg, we all have a responsibility to keep our community safe. It’s not just on us students; it’s also on our administration too.

This article originally appeared on page 18 of the November 1, 2021 edition of The Gettysburgian’s magazine.