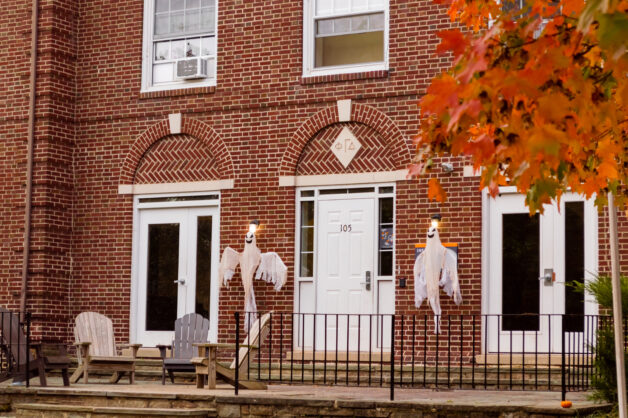 Athena House, the location of the former Phi Gamma Delta fraternity house, is home to a female-only cohort of sorority women, overseen by the Office of Student Activities and Greek Life (OSAGL). 24 women, who are members of Gettysburg College’s six Panhellenic sororities, live in the house.

OSAGL created the house, in coordination with the Panhellenic Council, to address the wishes conveyed by sorority women on campus.

“The driving factor that led to establishing Athena House was student input,” said OSAGL Assistant Director Trevor McClenon. “For several years, members of the sorority community expressed a desire for an experience similar to the fraternities where sorority women could live together and host programs to promote community in a residential space they controlled.”

The women who chose to live in the house did so because they wanted an opportunity to interact with other sorority women within a communal living space.
Alpha Delta Pi member Lauren Cooke ‘23 said, “I was really interested in getting to meet new people and I’ve seen the benefits that can come from being in a group of like-minded people.”

House Manager and Sigma Sigma Sigma Member Allie Acero ‘23 agreed. “I wanted to meet more people and have more opportunities to interact with other sorority women because I didn’t get the chance to do that during the COVID-19 pandemic,” said Acero.

McClennon shared that OSAGL chose the location of the former Phi Gamma Delta house because of the availability of the space and the criteria it met.

“We’re able to make [the house] whatever we want now, and it’s a house of all women, so hopefully, we can make it a safe space for women on campus,” said Cooke.

In the future, the residents of Athena House want to host events to encourage students to interact with their community.

“A lot of women in my sorority are excited to host events without a need to host them in a fraternity’s house,” said Acero.

“We want to host events so people get to know us and who we are,” said Cooke. “I suggested an event with the [Gender and Sexuality Resource Center] so women on campus know this is a safe space for them.”

Some residents also view their house as a place where students who do not want to attend fraternity-hosted social events can go.

“For so long fraternities have controlled the social scene on campus and now sororities can have control over the events they want to host,” said Cooke. “I think it’s good that it could offer an alternative option for people who might not feel safe going to a fraternity.”

However, there have been minor issues with the transition of Athena House from a fraternity house to a sorority community.

“At first, [coordinating with OSAGL] was hard because our main point of contact, Caitlin Lindsey, left, but in recent weeks, we’ve been able to have better communication,” said Cooke. “In the future, we hope to work with OSAGL to hold house events.”

“Our main struggle is figuring out who we are and what we want to do,” said Acero. 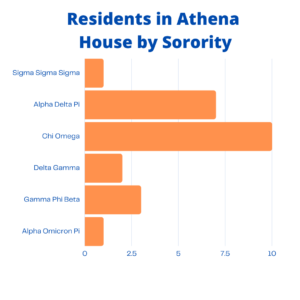 The office is currently working with the residents of Athena House to accommodate their concerns and to create a better living community for them.

“Residents of the house have brought a few topics up to us, including facilities concerns and how we can better support them in their programming efforts,” said McClennon. “We reviewed this feedback with residents, which led to the development of an additional leadership position focused on programming, additional equipment for the outdoor spaces and common areas, and the change in name to Athena House.”

“Athena deals with education and power, which is what we want for the women here.” -Allie Acero ‘23

Originally, OSAGL and the Panhellenic Council named the space Philotes House, then they voted to change the name to Sorority House, before finally deciding on Athena House.

“We didn’t want it to be called Sorority House because people who aren’t in a sorority can still apply. We know there’s a stigma about Greek life on campus, and we wanted it to be a space for all women, so we had a house meeting and voted to change the name to Athena House,” said Cooke.

Acero added, “Athena deals with education and power, which is what we want for the women here.”

Overall, the residents of Athena House are looking forward to defining their experiences, image, and opportunities in the upcoming year.

“I think the main point of this community is that the women of the house are really excited to start hosting events and to create a safe space for everyone on campus,” said Cooke.

This article originally appeared on page 16–17 of the November 1, 2021 edition of The Gettysburgian’s magazine.

Alli Dayton ‘24 serves as the News Editor for The Gettysburgian. She previously served as a staff writer for the news and features sections. Alli is a sophomore Sociology and Public Policy double major. When she is not working with The Gettysburgian, she is a member of the Eisenhower Scholars program, mock trial, and Gettysburg College Choirs. She is also a PLA in the Public Policy Department, a Resident Assistant, and the Program Assistant for the Eisenhower Institute’s Women and Leadership Program.