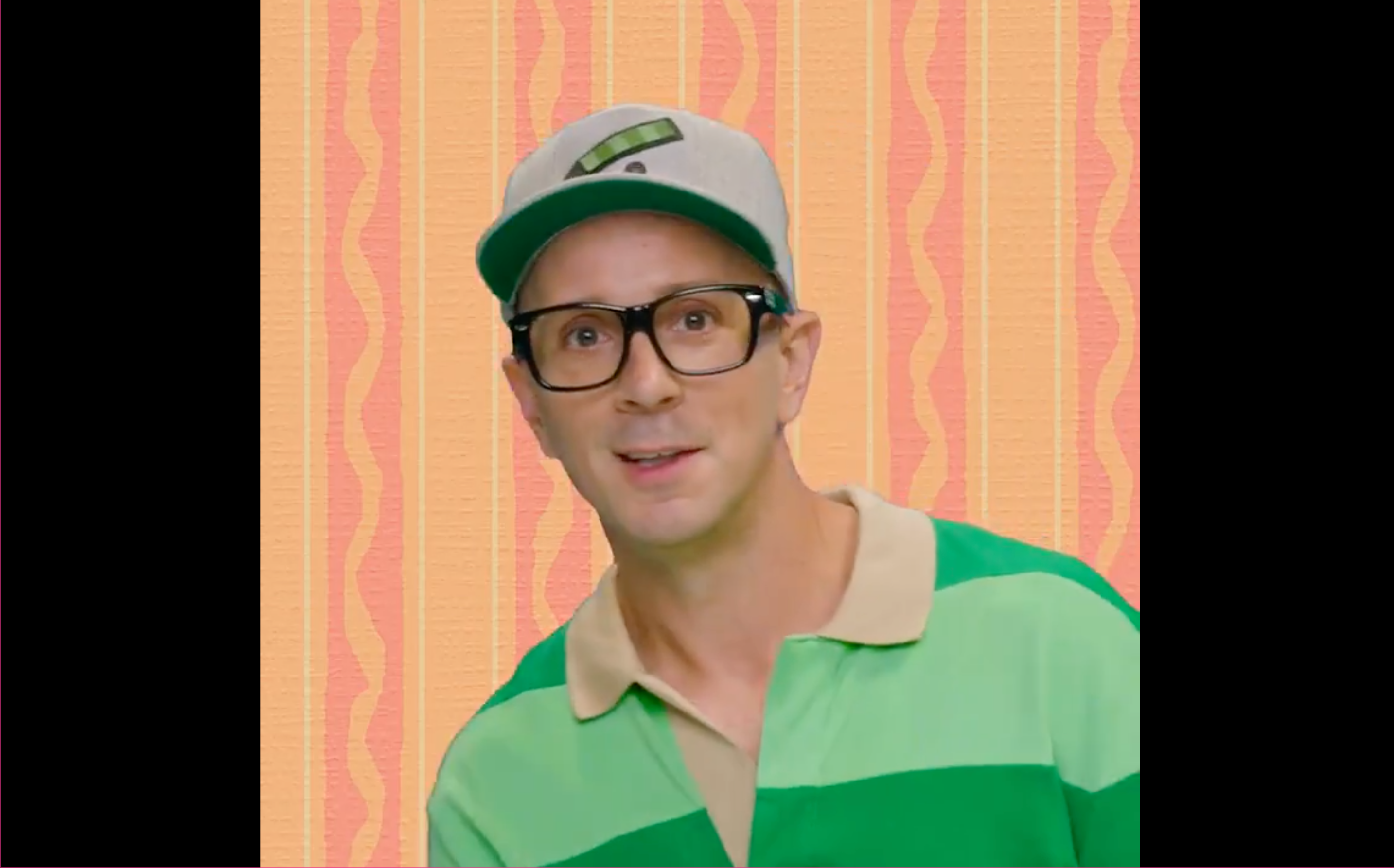 If you haven’t already seen, in early September, Nick Jr. brought Blue’s Clues’s original host Steve Burns back to deliver a touching message in honor of the 25th anniversary of the show. The video on Nick Jr.’s Twitter account showed the original Steve addressing his abrupt departure from the show to go to college, and reflecting on how far both he and the viewers have come since he was last on the show.

“I guess I just wanted to say that after all these years, I never forgot you. Ever,” Burns said in the video, ”And I’m super glad we’re still friends.”

All corners of the internet erupted with bursts of nostalgia. The video reached 38 million views and trended on Twitter as generations of Blue’s Clues fans responded emotionally to Steve’s return. Stephen Colbert did a segment on his late-night show where he reacted to the video and brought Burns out for a hug.

Gettysburg alum and former Gettysburgian columnist Rick Deutsch ’00, senior creative director at Nick Jr., was at the helm of this heart-warming campaign. We sat down with Deutsch to learn more about how the special came together, and to discuss how the video struck a note with generations of viewers.

What is your role at Nick Jr.?

“I work on the brand creative team at Nickelodeon. We work on preschool content, and since Blue’s Clues is a preschool property, that campaign was ours.

“We act as an in-house creative agency for all the various teams at the company. And that’s everything from promotions on linear cable to trying to recruit viewers from other platforms, be that other TV networks or on YouTube or wherever these days.

“We handle the content for all of our social platforms, including talking to parents on Facebook and Instagram and Twitter. So, basically anywhere we’re trying to get the word out about what’s going on at Nick Jr.—that’s our team’s purview.”

You certainly succeeded in getting the word out with the viral 25th anniversary video. Can you talk a little bit about the planning and ideation process for this video with Steve Burns?

“We’ve been making creative plans around [the 25th anniversary] for the better part of a year. It’s rare that we have that much time to plan, which was great in this case because we had some very ambitious plans.

“The goals of the campaign were buzz and press and awareness for the show. We want to make sure that parents know that the show is still around—some of those people who grew up with Steve as their host with the original Blue’s Clues are now old enough to have kids in our demographic so it’s kind of a perfect opportunity to talk to those people. But, we knew that this was largely a nostalgia-based campaign.”

Can you walk us through the process of bringing this campaign to life?

“We wanted to make sure that [Steve] was comfortable being part of the campaign. Much to our surprise and delight, we presented him with a bunch of different pieces that he could get involved in on this campaign including a music video [and] a whole bunch of social pieces with the other hosts, and he basically was like, ‘Yeah, I’ll do all of it.’ Actually, it was Steve’s idea to talk directly to his fans in some way.

“When we had the shoot, [and] Steve delivered [the message], we were all watching this happen. First of all, everybody was so emotional watching it live; he just was speaking so authentically. And he was just so real. And you could tell that it was just as moving to him as it was to everybody on set when he was doing that. So it was just a really powerful moment and we knew it as it was happening.

“We knew that, for the people that grew up with Steve, and who were obsessed with him, and then had to watch him go off to college, it would be impactful. We had no idea that it would go viral like this. We had no idea that it was going to be covered by mainstream media—that he was going to make an appearance on Colbert, and that you would have people literally weeping, and doing so publicly on their own social channels.

“This is the first piece of content I’ve ever worked on in my marketing career that was even remotely close to anything considered viral, and I’m so happy that it’s something this positive that really impacted people and made people feel good. So that feels really good.”

How did you and the team react when you realized this campaign had reached viral levels?

“I mean, brands rarely make viral content. All brands want to make viral content but rarely does anyone ever do it. So, when it became clear to us, about a day after we posted it, that it was exploding, for many reasons it was jubilation beyond our wildest imaginations.

“And part of that obviously was, ‘Wow, people are talking about Blue’s Clues, which is exactly what we want. But also, people are impacted by this in a deep way that shows that they still have a connection to Steve and to this show, and they seem to be really happy that we made this, which explains the jubilation really.

“If I never make another viral piece, I’ll be so thrilled that the one that we made had such a positive impact on people.”

So about that time Steve went off to college… #BluesClues25 pic.twitter.com/O8NOM2eRjy