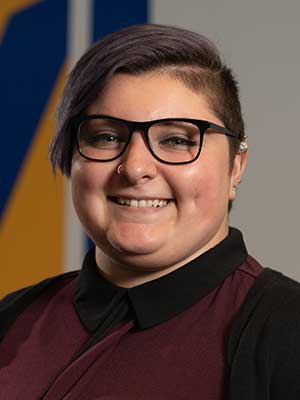 Del Gaudio’s role entails leadership over initiatives for the Women’s Center and LGBTQIA+ Life. In an Instagram Live on the LGBTQIA+ Life’s page, she outlined her goals to provide resources to students, including education and training, offer support and advocacy, and create an inclusive environment for gender and sexuality at Gettysburg.

“I’m really interested to know what students want so I can mold my goals,” she said. “My goal is, ultimately, to help support students, to help make sure that you feel at home at Gettysburg, to make sure that folks who want to learn about gender and sexuality are able to have a place where they can do that.”

Del Gaudio also mentioned a desire to expand on existing resources and programs in addition to listening to student concerns and suggestions. “I think [my work will entail] finding what students need in terms of resources, more programming, getting into classrooms, doing more education, more outreach,” she said.

She hopes to raise Gettysburg College’s four out of five-star ranking on the Campus Pride Index, a national benchmarking tool to evaluate LGBTQ-friendly measures on colleges and universities, to five stars. She implemented resources that helped raise Hofstra’s ranking from four-and-a-half to five. Del Gaudio also expressed her intent to serve as an advocate for students.

“If there’s something [students] want to change, I am a way to amplify that idea or that voice on campus to make sure that students are being supported,” she said. “In meetings with other administrators and in decisions on policies on campus, I will take student voice concerns and bring them to those rooms.”

Gettysburg commenced a nationwide search for an LGBTQIA+ director after former Director of LGBTQA Advocacy & Education Tiffany Lane left the College in 2018 for Colgate University. Del Gaudio, who has a Master of Arts in Counseling with a concentration in higher education from Montclair State University, brings experience in student life to the new position.

On June 15, President Iuliano announced that beginning in July, Executive Director of the Center for Public Service and former Interim Director of LGBTQIA+ Life Gretchen Natter will supervise Del Gaudio in her new position.

Editor’s note: This article was updated at 3:52 p.m. on June 16 to include the Gretchen Natter’s advisory position.