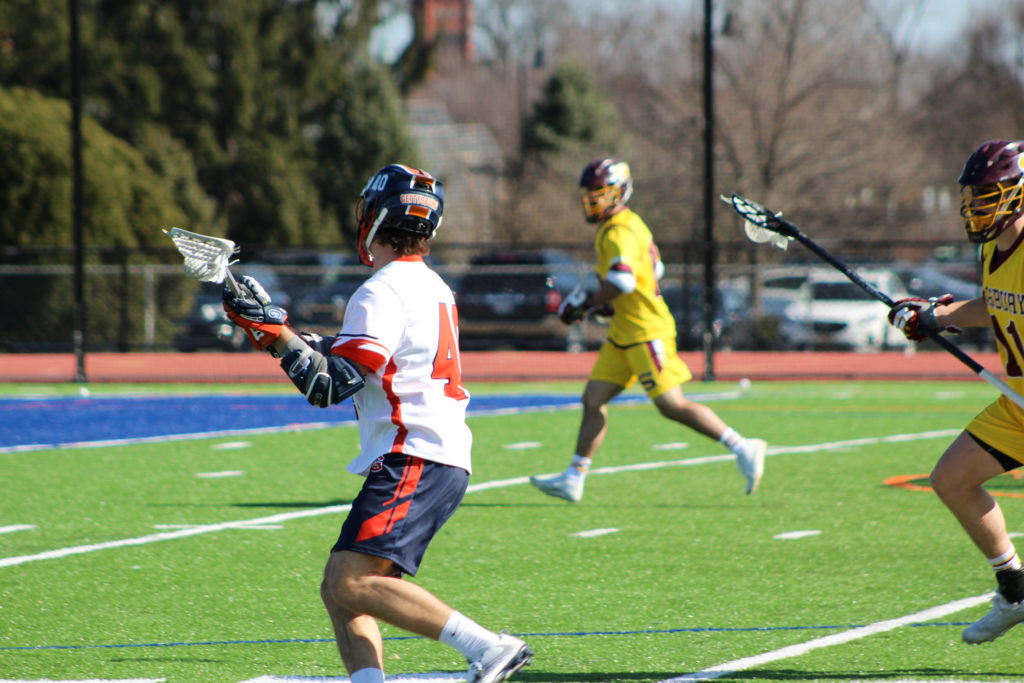 Gettysburg teams entered Week 5 prepared to keep all their seasons rolling. Here’s a breakdown of the competition.

Men’s Tennis finished their last home match on a high note, taking down McDaniel 9-0. The Bullets won on third doubles and fifth and sixth singles by way of forfeits. They won both doubles with first-years Alex Kagen and Michael Zayneh winning 8-2 at No. 1 and junior Zach LaChance and sophomore Matt Rau winning 8-3 at No.2. The Bullets also went on to sweep the four singles matches with Zayneh and senior Patrick Bodovitz putting on inspired performances. The team wraps up the season at Franklin & Marshall next Saturday, May 1, at noon.

Women’s Tennis also completed their home campaign the same way the men did, with a 9-0 shutout win. First-year Gillian Rozenfiled and sophomore Alex Rieg won 8-0 at No. 1 doubles, and junior Alexis Rinker and first-year Tierney Cantwell won 8-0 at No. 2. Rozenfield, Rieg, Cantwell, and first-year Niki Melnick won in straight-sets in their singles matches. The Women’s Tennis team also concludes their season at F&M on Saturday at noon.

The Gettysburg Baseball team split with McDaniel on Friday, losing Game 1 3-2 and winning Game 2 10-4. McDaniel led early with three hits and two runs in the first. Senior Collin Short provided the Bullets’ first run with a double to left-center in the third inning. Senior Dan Ball allowed McDaniel’s third and final run in the third inning, but went on to retire 11 of his final 12 batters. The Bullets got a run back in the sixth, but it wasn’t enough to comeback.

Game 2 went much better for Gettysburg. Short and Matt Szczesny drove in two runs in the first with a double and a sacrifice fly respectively. Junior Andrew Decker and Szczesny brought in two more runs in the third, making for a 4-0 Bullets lead. Decker and Short drove in two more runs in the top of the fourth, before junior Shane Manieri hit his second home run of the season, this time a two-run bomb to make it 8-0. McDaniel drove in four runs in the bottom of the fourth, but first-year Andrew Donlan drove two more runs in for the Bullets to close out the game. Sophomore Kenneth Spadaccini pitched three scoreless innings to earn himself a win. The Bullets continue their season as they host Franklin & Marshall on Saturday, May 1, at noon.

The Gettysburg Softball team swept McDaniel after an especially exciting Game 1 on Saturday. The Green Terror held a 5-1 lead through 6 innings, before the Bullets mounted an impressive comeback. First-year Abby Zucatti hit a three-run homerun to cut the lead to one, before Jess Campana’s RBI single tied the game at 5. Senior Emily Colline’s RBI double brought in two runs and gave the Bullets a 7-5 lead. McDaniel was able to get one back, but the Bullets held on after an extremely exciting contest.

Game 2 saw sophomore Olivia Moser get the Bullets off to a 1-0 lead in the first. After McDaniel tied it at 1-1, Gettysburg pulled away with one run in the third and five in the fourth. McDaniel got three back in the fifth, making the score 7-4. The Bullets went on to add two more runs while McDaniel added one, and the game ended 9-5. First-year Megan Hughes improved to 5-2 and sophomore Jasmin Herrera improved to 4-1 from the circle. The Bullets close out their regular season when they host Franklin & Marshall on Senior Day next Saturday, May 1, at 1 p.m.

Men’s and Women’s Swimming Face Off Against Johns Hopkins

The Gettysburg Men’s Swimming team put on an impressive showing in their only meet of the season on Friday against Johns Hopkins. The two teams combined for 19 NCAA qualifying times. Senior Oliver Yancey achieved a personal-best 20.44 in the 50 free to enter the NCAA “B” standard. Seniors Danny Petrillo and Harrison McCool also achieved personal bests at 21.13 and 21.14 respectively, putting them both in the top 10 in Gettysburg history. Yancey also had an impressive showing in the 200 free relay, along with junior Sam Nonemaker, seniors Aedan Collins and Jack Edelson. These four also earned a 45.38 split in the 400 free relay, again getting them under the NCAA “B” cut at 3:03.24. Freshman Luke Mckenna also had an impressive night, winning the 500 free with the seventh best score in program history of 4:41.13, along with cracking the top 10 in the 1,650 free with a score of 16:16.47.

The Gettysburg Women’s Swimming Team also had a successful night against Johns Hopkins. Sophomores Annabel Gorman and Elissa Clancy scored 58.13 and 58.58 in the 100 butterfly respectively, the sixth and seventh fastest times in program history. Sophomore Talia Moss had two impressive scores in the breaststroke events at 1:07.20 and 2:25.71. Sophomore Lauren Manning and senior Katherine Sears completed both the 500 free and 1,650 free. Manning won the 500 with a time of 5:14.00, and Sears finished third at 5:18.95. First-year Alexandra Zelinske recorded two top ten times in program history in the backstroke events with 57.96 in the 100 back and 2:06.99 in the 200. Both the Men’s and Women’s Swimming teams will be extremely excited for a full season in 2021/22.

After a comfortable win over Washington College midweek, the Gettysburg Men’s Lacrosse team made light work of McDaniel on Saturday, beating them 20-2. Senior Alex Ulrich had a day, winning 18 of his 20 face-offs, and picking up 8 ground balls. The Bullets went into halftime with a 10-1 lead and doubled that advantage in the second half. Seniors Jack Fletcher and Nick Cooper had 5 goals and 3 assists and 3 goals and 4 assists respectively. Juniors McCain Wnek and Kieran Ward contributed 3 goals and a goal and 5 assists respectively. First year Nolan Sullivan contributed 12 saves in the win. The Bullets continue their season against undefeated F&M Saturday, the winner will take home the conference title.

The Gettysburg Women’s Lacrosse team also cruised past McDaniel this past weekend with a 20-3 win. Seniors Bri Stokes and Kerry McKeever both scored 4 goals, along with sophomore Katie Fullowan. Sophomore Shannon Twill had a dominant game in goal with 8 saves. The Bullets took an 11-1 lead into the half and didn’t look back. The Bullets have now totaled 20 goals in consecutive games for the first time since 2019, when they dropped 22 on McDaniel and Bryn Mawr. McKeever has now scored in 39 straight games, and Stokes’ 5.8 points per game ranks fourth in program history. The Bullets continue their season when they travel to face #1 ranked Franklin & Marshall for the Centennial Conference trophy on Saturday, May 1, at noon.

The Men’s Track team kicked off their 2021 season at home on Saturday and had three top-5 finishes. Senior Luke Matzke finished second and broke his previous personal record on the 10,000 meter run with a time of 33:13.35, which is 10th all-time in Bullets history. Fellow senior Nick Rose finished third with a personal record time of 37:32.17. Junior Will Hopkins added a personal record in his second place finish on the 800 meter run with a time of 1:57.18. Junior Angus Brouillard finished second in the 400 meter with a personal record time of 52.34. The 4×100-meter relay team of first-year Arthur Keegan, sophomore Caden Giordano, junior Corey Palazzolo, and senior Colin Motill finished second with a time of 44.60. Giordano and Keegan went on to join first-year Michael Sutera and sophomore Eric Liedtka in the 4×400-meter relay “A” team to claim second. The “B” team of Hopkins and seniors Christian Rodriguez, Owen Crosby, and Jack Kenyon finished right behind in third. Palazzolo finished with two other top-three finishes in the high jump and long jump. The team finished in third place on the day, and will compete at the Centennial Conference Championship at Muhlenberg College on Sunday, May 2.

The Women’s Track and Field team also competed at home on Saturday. Junior Jessica Alessi achieved her first career victory in the hammer witha toss of 124-11, pushing her into fifth-all time in outdoor track and field history. She also finished third in discus on the day with a score off (100-09). Junior Katherine Mangione finished second with a score of 105-11. First-year Alexa Schauder finished second in the pole vault with a score of 9-06.25 which tied her for third all-time. Fellow first-year Holly Ferrara finished third in the javelin with a score of 122-01.25, making her seventh all-time. First-year Emily O’Hara set a new personal record time in the 400 meter dash. Junior Kathrin O’Brien and sophomore Amanda Addesso finished second and third in the 10,000 meter run respectively, and sophomore Julia Piness scored a personal record time of 17.35 in the 100-meter hurdles. The Bullets placed third on the day, and will compete at the Centennial Conference Championship at Muhlenberg College on Saturday, May 1.

After finishing at an even par with a four stroke lead after Saturday’s CC Championship first round, senior Quinn Greene was able to hold on to win the individual title with a two-day score of 148. The team as a whole lost in heartbreaking fashion by one stroke to Franklin & Marshall College. The Bullets had three students in the top 10, with junior Hayden Moffat and Joseph Furlong joining Greene with 156 and 160 two-day scores respectively. The Bullets held a three-stroke lead over the Diplomats going into the final round, but a bogey filled 16th hole allowed for the Diplomats to claw their way back and claim their 11th conference trophy. This was Greene’s second win of his college career. The Bullets finished off a short but successful season on a good note, and they will be excited await the All-Centennial Conference Team to be announced next week. This year’s team will be voted on by the conference’s coaches and will be based on performances throughout the season.