Syd Quan and Colin Hughes will lead the 2021-22 Student Senate.

Sydney (Syd) Quan ‘22 and Colin Hughes ‘23 will serve as president and vice president, respectively, of the Gettysburg College Student Senate for the 20-21 academic year.

Quan, who ran uncontested, captured 74 percent of the vote. With 450 votes, Quan still received more than double the amount of votes that current president Kurtis Grey ’21 received in his election.

“I am equally ecstatic, humbled, and proud to be part of such riveting senate history. As a woman of color, as a first generation student, and as an uncontested candidate, I am extremely grateful for everyone’s support and kind words,” said Quan. 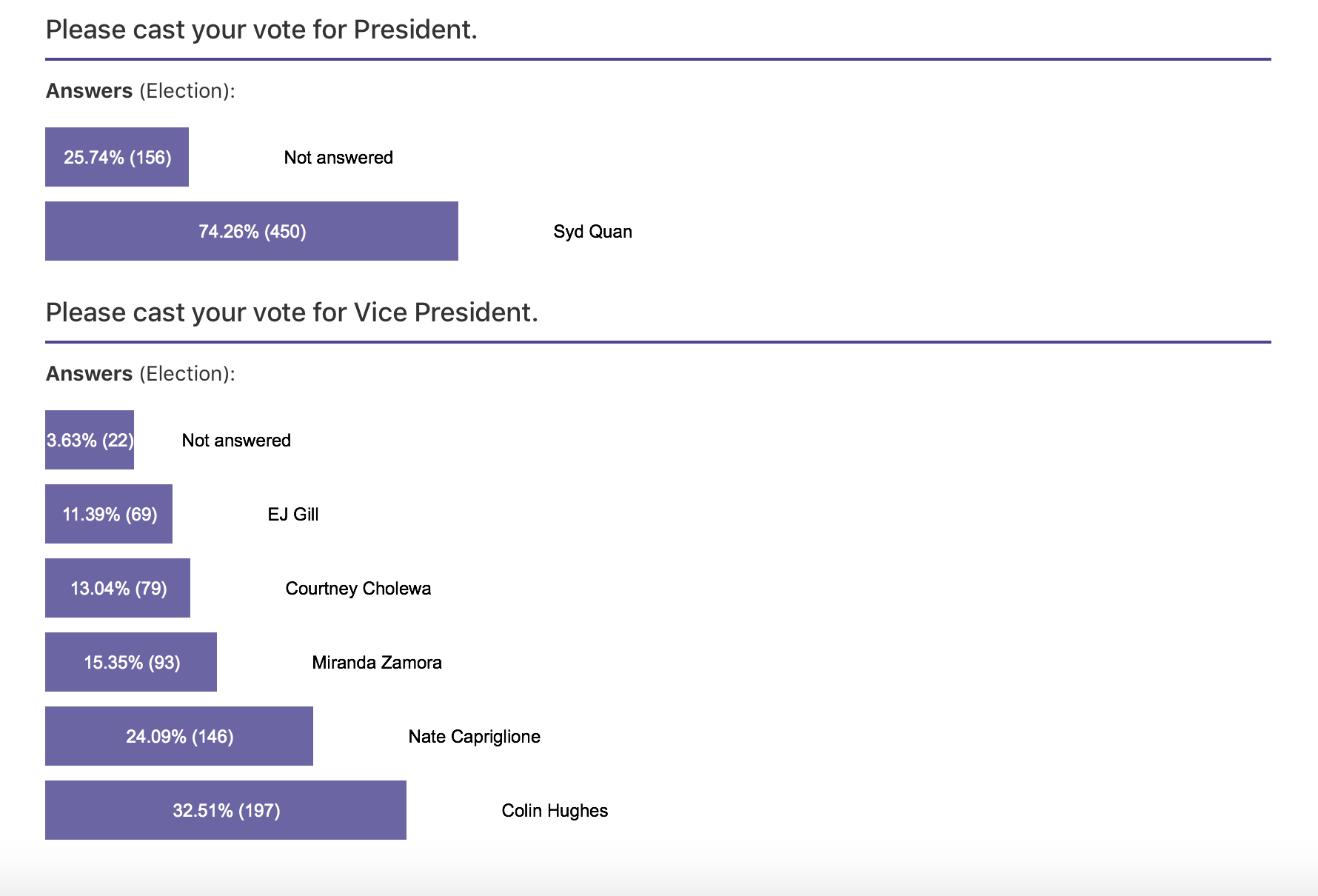 The vice presidential race saw no candidate receive the majority of votes. Hughes won the election with 32 percent of the vote.

“I thank all those who supported my campaign and all the VP candidates who ran good, constructive campaigns. I want to congratulate Syd on winning her bid for Senate President and am looking forward to working with her as soon as possible on advancing our tangible campaign goals aimed at making Gettysburg College a fairer place to learn,” said Hughes.

A competitive race with the most candidates in four years, the vice presidential race was not without controversy. Survivors at Gettysburg, a student-led activist group (not recognized by Student Senate) publicly endorsed Hughes as the candidate that would stand for survivors of sexual assault.

Grace Verbrugge ‘22, the head of Survivors, went on to personally endorse Hughes on her personal social media account as the only candidate committed to anti-racism.

“People underestimate the importance of these positions, and we need to take them seriously,” said Verbrugge. “They shouldn’t just be disregarded as a hobby or a popularity contest, because it’s an opportunity for us to elect student leaders who reflect not only who we are, but who we want to be. Student senate is a direct link between the student body and the administration, and we need to understand it as such. We want people that will advocate fiercely and transparently for all of us, not just their friends or the people like them.”

Many students and organizations, most notably the instagram account @BurgChicks, were quick to denounce Verbrugge’s apparent identification of every other candidate as a racist. Hughes himself made a statement that he does not believe any of his competitors are racists.

“I don’t think any of my opponents are racist and never said that they were. I am not in favor of any of my supporters making false and divisive claims, which is why I urged my supporter to take down her post and refrained from engaging in any social media drama. However, I do welcome any lessons on how the college can be more anti-racist that may have resulted from the situation,” said Hughes.

“This past week, a campaign poster supporting Colin Hughes’s campaign was found in the basement of Glatfelter Hall. The Election Rules outline that no campaigning can occur within academic buildings, and therefore this is considered a violation of the rules,” said Troy.

The violation is set to be discussed at the April 26 Senate meeting.

President Kurtis Grey ‘21 appears optimistic for the next year: “I’m very excited for everyone who will be joining the next Executive Board, it was incredible to hear all the voices and opinions of the leaders and future leaders of the Senate. I think they will have a lot to accomplish and they have the drive to do it and I am excited to help them get started with that.”