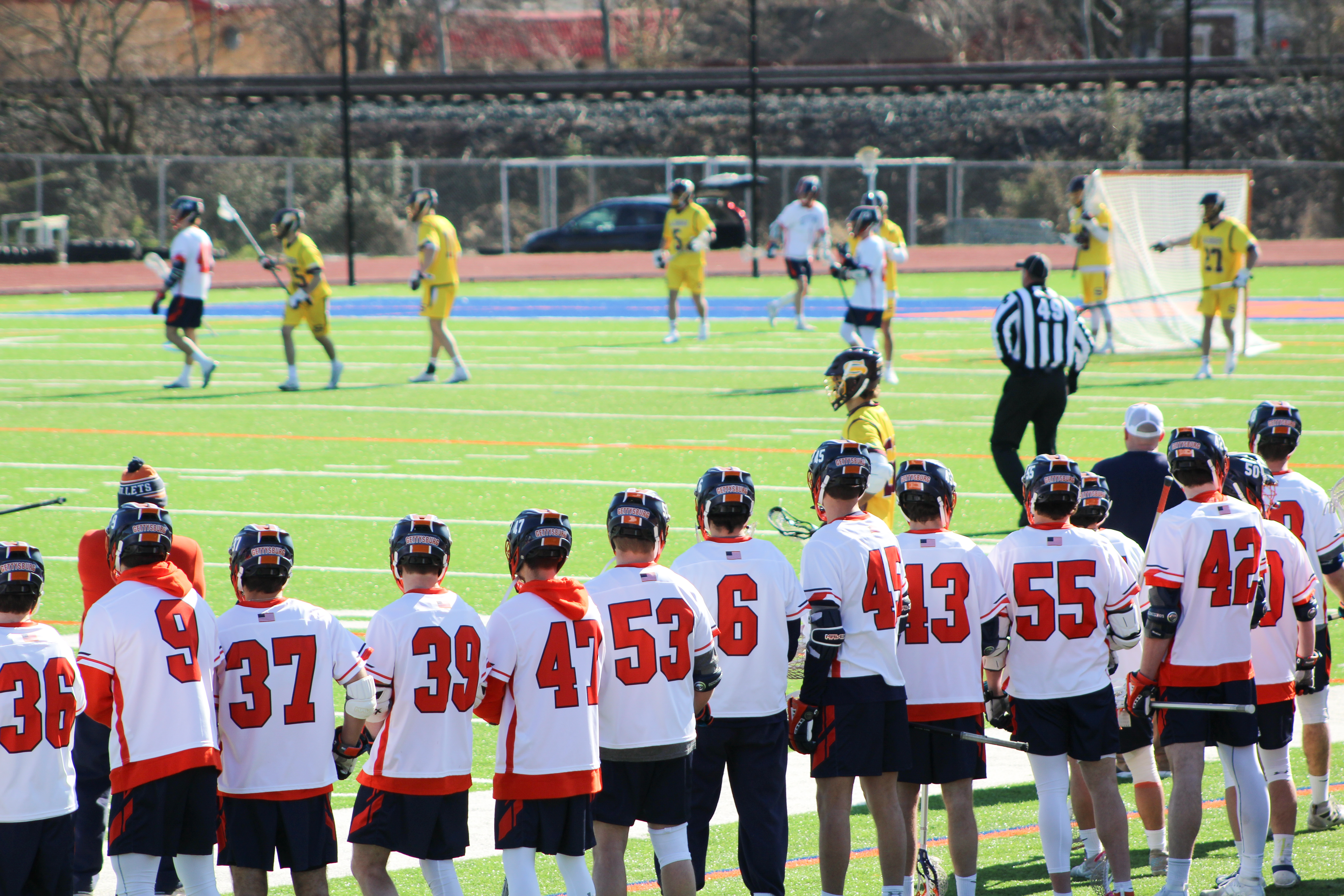 Heading into the third week of Gettysburg College athletics, Bullets teams continued their strong start in the Spring 2021 season as they matched up against Dickinson College.

Women’s lacrosse improved their record to 3-0 on the season with a 17-5 win at Dickinson. Five individual Bullets scored multiple goals. Sophomore Katie Fullowan, with four goals and seven draw controls, and first-year Jordan Basso, with four goals and three assists, a season-high seven points, led Gettysburg’s offensive onslaught, followed closely behind by seniors Bri Stokes and Kerry McKeever, each with two goals. Basso’s seven points was the highest by a Gettysburg first-year since McKeever’s seven against Denison in 2018. Sophomore Shannon Twill was a brick wall in the goal, totaling ten saves and bolstering her season save percentage to .639. While the first half was tightly contested, the Bullets offense took over in the second, a motif of the young season: in their three games, they have out-scored opponents 25-7 in the second half.

The women’s lacrosse team looks to continue their undefeated season April 10 at home against Ursinus.

After two postponements, men’s lacrosse began their spring season campaign with an exciting 9-7 win over Dickinson. The Bullets trailed for the majority of the second half, but sophomore McCain Wnek, first-year Quinton Mather, junior Kieran Ward, and senior Jack Fletcher all contributed to an exhilarating fourth quarter comeback with minutes remaining. Ward led the Bullets with three goals, two assists, and four ground balls, while Fletcher, senior Nick Cooper, sophomore Kyle Howard, and sophomore Aidan Wykoff each tallied one goal and one assist. Senior Alex Ulrich went a dominant 10-16 on faceoffs, and first-year Nolan Sullivan shined in his first collegiate start in goal, capturing eleven crucial saves, the most by a Gettysburg first-year goalie since Scott MacMillan’s eleven against St. John Fisher in 2019.

The men’s lacrosse team will likewise face Ursinus at home on April 10.

Men’s tennis downed the Red Devils 6-3, taking two of three doubles competitions and four of six singles competitions. Pairs Alex Kagan and Michael Zayneh, both first years, and Max Levy and Alec Shalk, both juniors, gave the Bullets an early 2-0 advantage in doubles, winning 8-4 and 8-2 respectively. Kagan and Zayneh cruised to two singles victories, and Levy and junior Matt Raul capped off the day with two singles wins of their own.

Women’s tennis dropped their match against the Red Devils, losing by the same score of 6-3. Dickinson only sent out four players, so Gettysburg’s three victories resulted from forfeits. Sophomore Alex Rieg and first-year Gillian Rozenfield lost a competitive doubles match 8-5, and first-year Tierney Cantwell showed promise, winning the most games for the Bullets in spite of losing her singles match 6-3, 6-1.

Both teams will host Ursinus on April 10.

Junior Cameron D’Amica finished third out of 14 competitors, leading the Bullets at their own tournament hosted at Hanover Country Club. D’Amica finished with an impressive 96 on the par-71 course, and she was only three strokes short of achieving second place. Seniors Claire Nagel, who finished with a 122, and Lindsay Waller, who shot a 131, rounded out the showing for the Bullets.

Gettysburg will compete in the Dickinson Invitational on April 10.

Baseball Wins in Walk Off Fashion

After a postponement due to rain and some rare April snow, the Bullets’ finally played their home doubleheader against Dickinson on Wednesday the 7. In game one, Gettysburg had a 5-3 lead going into the seventh inning, but Dickinson’s offense charged back, Christian Kim rocketing a pitch over the left field fence for the go-ahead home run. While the Bullets dropped game one 6-5, starting pitcher and senior Erik Wortmann stood out, recording three strikeouts, eight hits, and four earned runs over six and a third innings pitched. At the plate, junior Shane Manieri contributed two runs and an RBI on two hits, and senior Kobi Wolf drove in two runners also on two hits. Both Dickinson and Gettysburg got off to a hot start in game two, the score tied 2-2 after the first inning. Junior Teo Torrado came in clutch for the Bullets, stifling the Red Devils and retiring nine straight batters after entering the game in the second. Dickinson continued to threaten, but with the game tied 4-4 in the seventh, Wolf threw Dickinson’s Kenny Tagliareni out at home after he tagged up on a liner into right, a play that fired up the team and kept the game within reach. In the bottom of the eighth, the Bullets were able to load the bases against Dickinson’s closer, Beau Dana. Junior Andrew Decker, down 0-2 in the count, hit a sharp chopper to short, allowing junior Matt Muir to score from third and lifting the Bullets to a 5-4 win. The team subsequently celebrated the walk off victory, racing out of the dug out and corralling Decker over near first base.

Gettysburg will travel to Ursinus on April 10 for a doubleheader. Softball was unable to get their doubleheader against Dickinson in this week, so they will host the Red Devils next Tuesday the 13. Softball also travels to Ursinus this weekend.