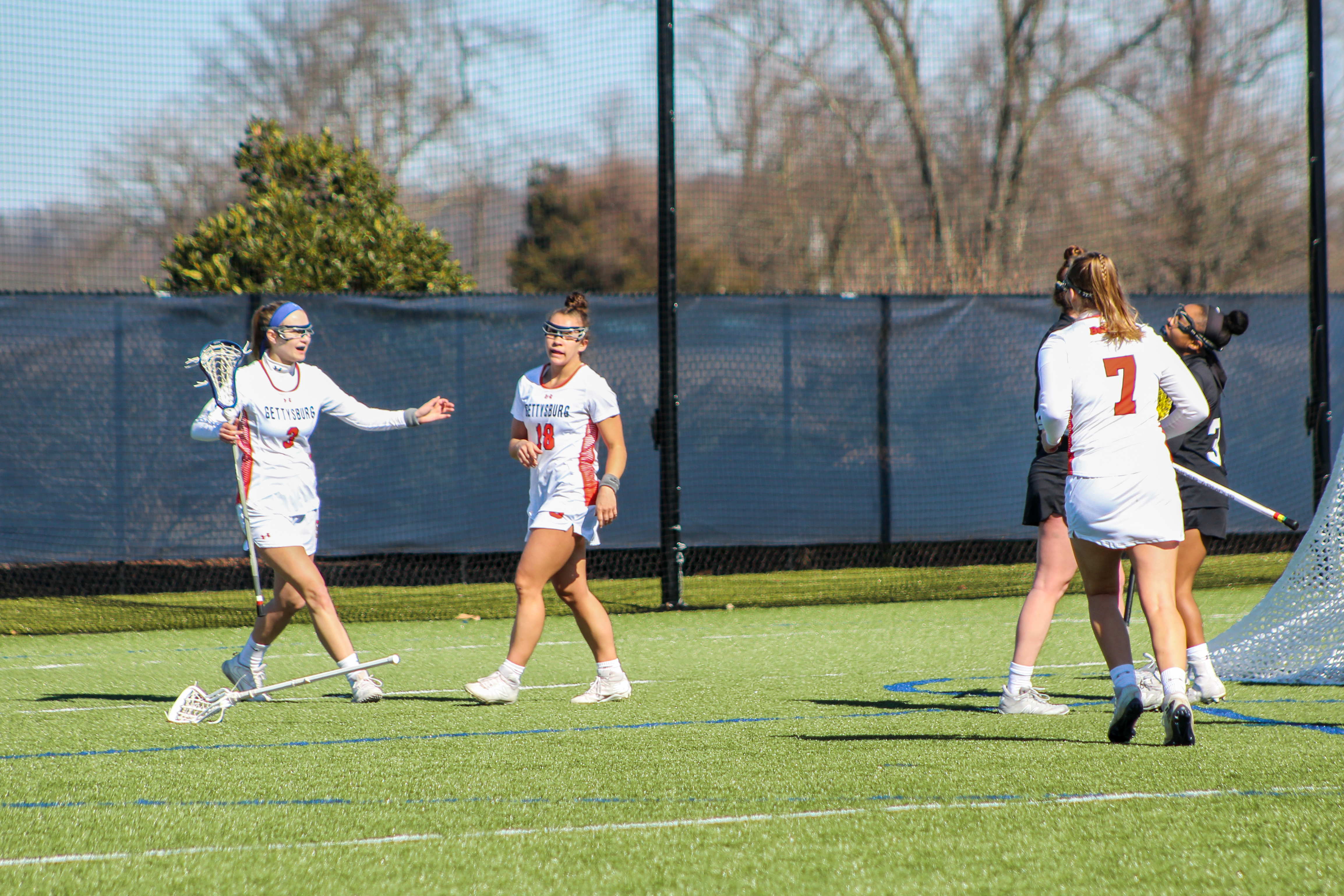 After a successful first week for Gettysburg Athletics, the majority of spring teams were back at it again for another successful weekend.

The Gettysburg Women’s Lacrosse team got their second win of the season on Saturday, with a thumping 17-3 victory over Muhlenberg on Clark Field. The Bullets were led by Senior Kerry McKeever, who scored seven goals and had an assist, the first of which just eight seconds into the game. She tied her career high for points, with 8, which she achieved two years earlier to the day. Senior Bri Stokes added 4 goals and 3 assists coming off her CC Offensive Player of the Week nod the week prior. The team remains 5th ranked in the nation. The Bullets next contest will be when they face Dickinson away on Saturday, April 3rd at 12:00pm.

Men’s Lacrosse was postponed for the second week running due to recent positive COVID-19 tests within the team. They’re scheduled to start their season with a trip to Dickinson to play the Red Devils after the women.

The Gettysburg Tennis Teams hosted Muhlenberg at home this past weekend. The Women’s team bounced back from last week’s struggles by shutting out the Mules 9-0. They won both doubles matches with scores of 8-2 and 8-4, with strong performances from sophomore Alex Rieg and freshman Gillian Rozenfield, as well as junior Alexis Rinker and freshman Tierney Cantwell. Rieg, Rozenfield, and Cantwell then all went on to win their singles matches in straight sets.

The Men’s team lost on a 6-3 decision to Muhlenberg at the weekend. The teams each shared a victory in the first two doubles matches before Muhlenberg held on for a tight victory over freshmen Alex Kagen and Michael Zayneh to seal the win. The Mules also won tird and sixth singles on straight sets, but not without valiant efforts from junior Alec Shalk and senior Patrick Bodovitz. Tennis will continue their season this Saturday, also away at Dickinson.

The Gettysburg Softball team recorded their second straight sweep after two 10-1 victories away at Dickinson at the weekend. Game 1 started with the Red Devils holding a 1-0 lead at the bottom of the second. The Bullets put two on the board in the top of the third, and then four more in the top of the fourth to extend their lead to 6-1. One run came in the fifth before three more came in the sixth to secure a victory in Game 1.

Key performances were put in by sophomore Allie Cluster as she went 2-4 with two doubles, three RBIs, and a run, and freshman Megan Hughes as she pitched six innings with five strikeouts and zero earned runs, along with 3 hits on the offensive end. Game 2 was another clinic for the Bullets. They were up 5-1 after three innings, and scored five more runs in the fifth inning to close out the game. Sophomores Olivia Moser and Jess Campana both had strong games, as Moser went 3-4 with a double and 2 runs and Campana went 2-4 with 2 RBIs and a run. Sophomore Jasmin Herrera pitched 4 innings and 4 strikeouts with zero earned runs and added 3 hits and a run on the offensive end.

The Baseball team split games away at Muhlenberg on Saturday afternoon. The Mules jumped out to a 4-0 lead after two innings, before the Bullets cut the deficit in half at the top of the third. The Mules then answered, and the 4th inning ended 7-3. The Bullets then held the Mules scoreless until the 8th inning, when they scored eight runs to close out the game with a score of 15-5. Senior Collin Short went 3-4 with an RBI. Game 2 started off much better for the Bullets. Senior Erik Wortmann retired the first 12 batters he faced and the Bullets jumped out to a 3-0 lead after four innings. The Mules came back with three runs on four hits in the fifth inning to tie the game. The Bullets scored four runs in the 6th and one more in the 9th to win the game 8-4. Senior Collin Short was once again impressive, batting 2-3 with a run and 2 RBIs, and senior Erik Wortmann got the win on the mound.

While most everyone else is away, baseball and softball welcome the Centennial Conference foe to campus this weekend.

The Men’s golf team started their 2021 season at The Bridges Golf Club this past Saturday by shooting 311 and finishing in second place. The Bullets had three players in the top 10, but finished 17 strokes off the pace set by winners Franklin and Marshall. Senior Quinn Greene, junior Hayden Moffat and freshman Evan Drummond each finished at four-over par with 77s. Freshman Cameron Deiuliis finished with an 80 and a tie for 12th, and senior Daniel Rieger finished with an 84. The Bullets return to action on April 8th for the Gettysburg College Invite at Quail Valley.

The Women’s golf team also opened their spring campaign at the McDaniel Invitational on Saturday. Junior Cameron D’Amica placed fourth with a 94 at the single round invitational. This was her fourth career top-five finish. Senior Clare Nagel scored a 104 to place seventh and fellow senior Lindsay Waller finished 12th with a 128. The Bullets return to the course on Saturday, April 3rd to host an invitational at the Hanover Country Club.

As of this second week, here’s where our teams stand.