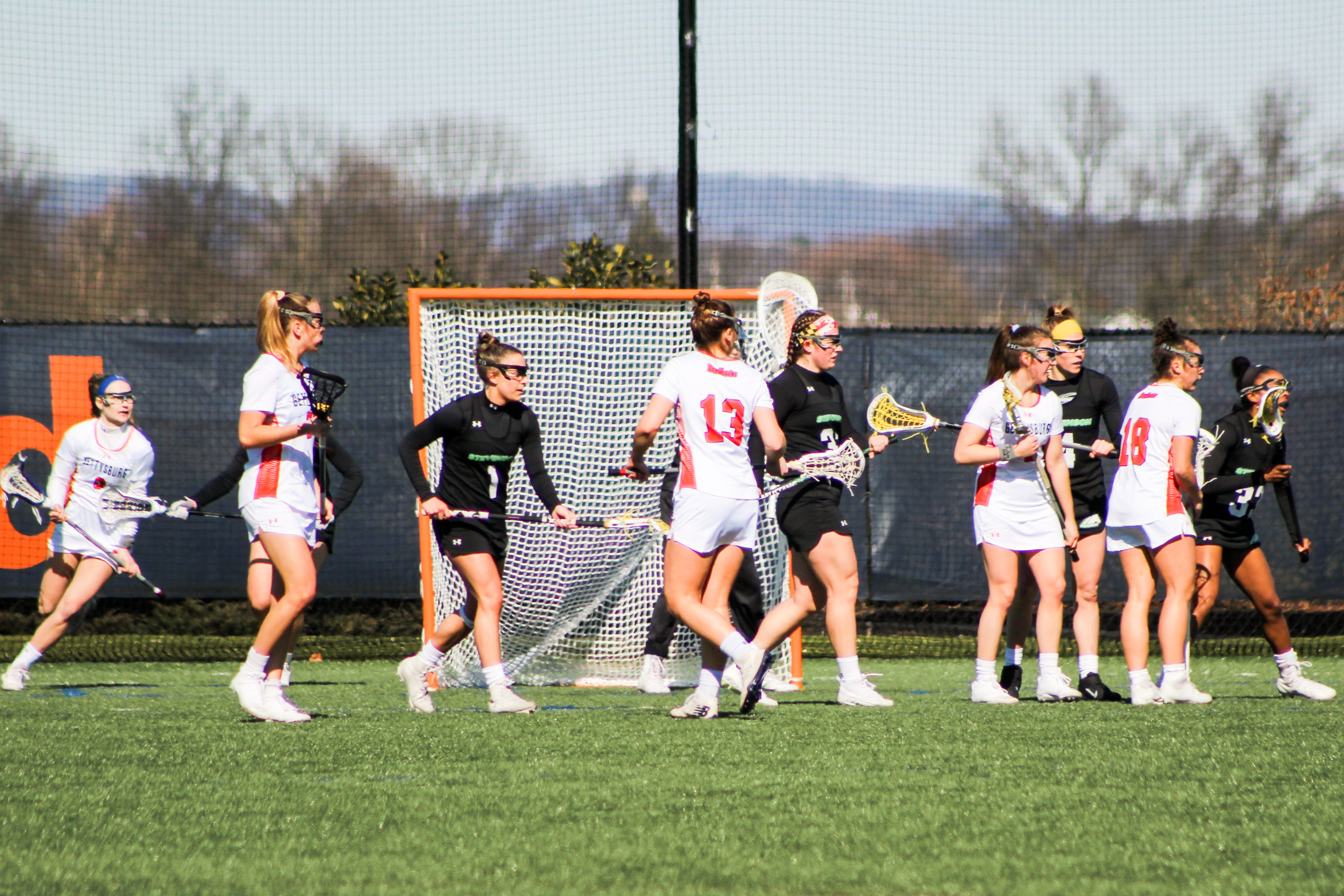 It had been over a calendar year since Gettysburg athletics competed in any sports, but this past weekend the Bullets kicked off Centennial Conference play. It was a busy weekend — all of the spring teams faced off against Washington College.

The action kicked off on Saturday with women’s lacrosse traveling to Chestertown, Maryland to take on the Shorewomen. They defeated Washington College 16-8 in the season opener and claimed the number 5 spot in the IWLCA national rankings. The victory was led by freshman Jordan Basso who scored her first collegiate goal, and then followed it up with three more. Senior Bri Stokes did her part as well, posting three goals, four assists, and scoring her one hundredth career point. Sophomore goalie Shannon Twill had 12 saves in the win.

Men’s lacrosse was scheduled to play this past Saturday, but the game was postponed when a number of players tested positive for COVID-19. The team is scheduled to host Muhlenberg this Saturday at home at Musselman Stadium.

The men’s tennis team was defeated by Washington College 5-4 after losing four singles matches to the Shoremen. No. 1 doubles duo of first-years Alex Kagan and Michael Zayneh, however, came away with a big win over Washington College’s Ian Hewes and Landon Strober in an 8-3 contest. Gettysburg also got the victory with the No. 3 pair of Alec Shalk and Zach LaChnace — Washington College was unable to produce a duo, which resulted in a forfeit.

Women’s tennis lost 7-2 to Washington College on Saturday. WAC won five of six singles competition this past weekend — the Bullets managed to win one of the games with junior Shelby Deron getting the victory by forfeit. In the No. 1 singles contest, Gettysburg sophomore Alex Rieg was defeated by Piper Sartison, and in No.1 doubles, the Washington College duo of Irene Meng and Alisha White defeated Rieg and first-year Gillian Rozenfield. The No. 3 team of Shelby Deron and first-year Niki Melnick gave the Bullets their only doubles win by forfeit.

Back home in Gettysburg, the Bullets’ baseball team opened up with a double-header on Sunday at Kirchhoff Field. While it was good to have baseball back on the diamond, the outcome was not so pretty. Washington College swept the opening doubleheader, winning the first game by a score of 9-3, and the second 5-3. In the matinee, the Shoremen jumped out to an early lead, plating 5 in the first inning that all started with a lead-off triple from Max Ruvo. The Bullets showed some fight in the bottom half of the first, as sophomore first baseman Aaron Kirby knocked in a pair with a two-out single to cut the deficit to 5-2. WAC put up another run in the second and third innings and by the seventh they had their 9-2 victory in the bag. Senior Erik Wortmann started and went three innings, giving up six earned runs off of eight hits and zero walks. Fellow senior Dan Ball followed him, going six innings and giving up two hits, zero earned runs, and zero walks.

During game two of the series, Gettysburg jumped on the board first in the third with an RBI single from junior shortstop Matt Muir. Washington College tied it up in the top half of the fourth, but the Bullets would take the lead back, putting up two in the bottom of the inning due to a pair of errors. WAC posted three runs in the fifth and another in the ninth, which proved to be too much for Gettysburg. Senior Myles Burbank pitched 3.1 innings to start, giving up one earned run off of two hits and one walk. Sophomore Kenneth Spadaccini gave the Bullets 4.1 innings of work, surrendering one earned run off of five hits and one walk.

Just beyond Kirchoff at Bobby Jones Field, Gettysburg’s softball team took on Washington College for some more Sunday double-header action. This doubleheader ended more positively, with the Bullets sweeping the Shorewomen, as they shut out WAC 9-0 in the first game and won 8-2 in the second one. Gettysburg got their first run of the season in the second inning with an RBI single from sophomore Allie Cluster. The Bullets then went on to put up three runs in the third thanks to a SAC fly to left from the bat of senior Emily Colline and an infield single from sophomore Olivia Moser.

Gettysburg was not done there — they managed to score five runs in the fourth inning, with one of these runs coming from an RBI single from senior catcher Shelby Baker for her one hundredth career hit. The game ended in the fifth inning because of the eight-run rule and Gettysburg gained its first victory of the season. Freshman pitcher Megan Hughes started and went all five innings, giving up two hits, zero earned runs, and three walks.

Game two of this softball doubleheader started up shortly after, and Gettysburg continued where they left off. The Bullets scored two runs in the bottom of the first off of Shelby Baker’s two RBI’s double to center. Freshman Giovanna Komst had an RBI double of her own in the second inning and then scored off of sophomore Jess Campana’s single to left to put the Bullets up 4-0 after two. Shelby Baker continued to impress, hitting a solo shot in the third and giving her three RBI’s on the day. Washington College put up their only two runs in the sixth inning and Gettysburg closed it out in the seventh to complete the sweep. Sophomore Jasmin Herrera started this one for the Bullets and went five strong innings, giving up two earned runs off of six hits and one walk. Megan Hughes pitched two innings, posting two hits, zero earned runs, and zero walks in the game two victory.

After an eventful weekend opener in the books, the Bullets’ spring sports teams will play against Muhlenberg this weekend.