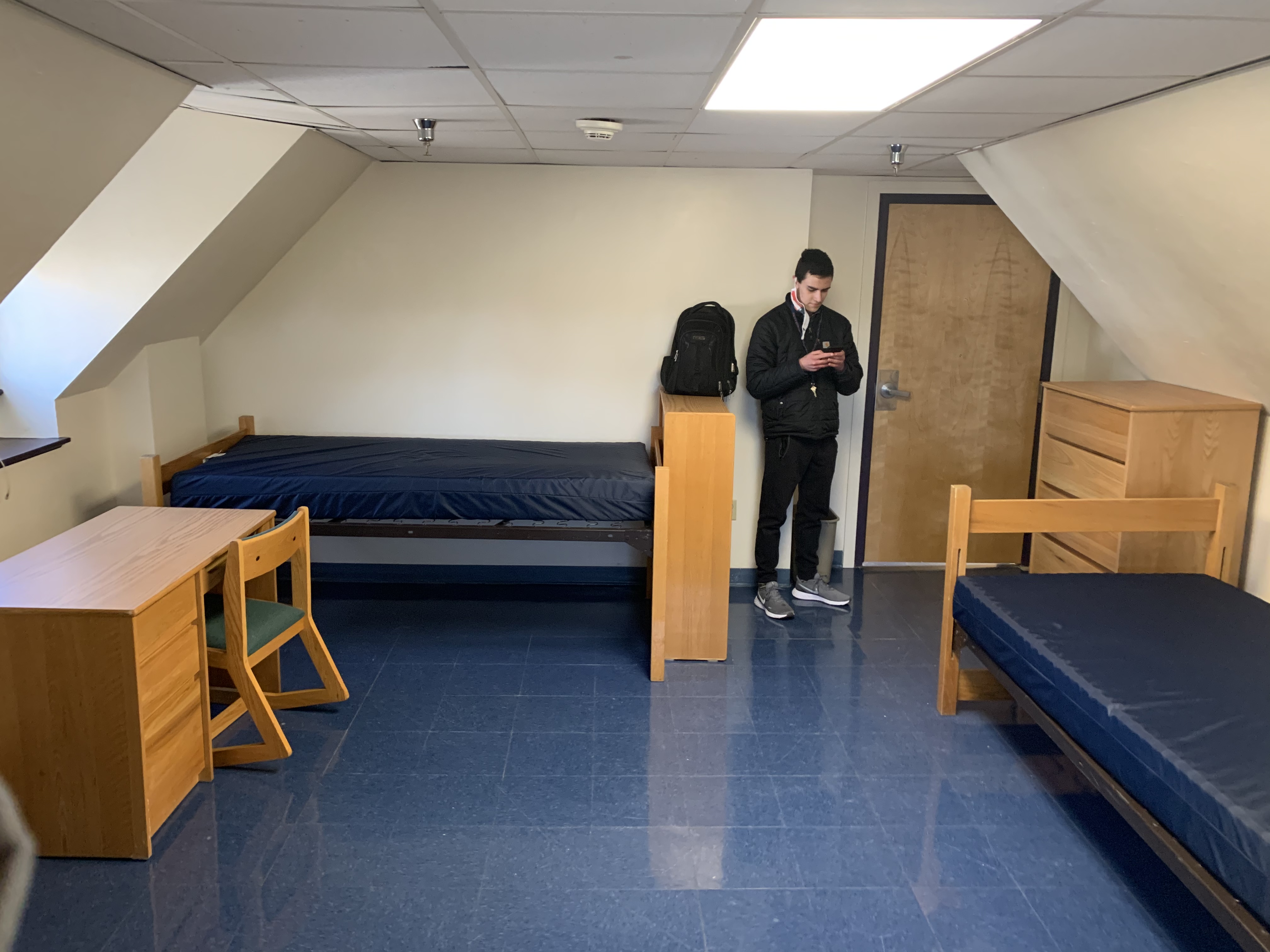 In an effort to maintain a low residential density, the college has prioritized housing students in single bedrooms instead of doubles or triples. As a result of this change, many students are currently living in unconventional housing across campus—including rooms in the Gettysburg Hotel and the President Inn & Suites.

Students are also living in the former fraternity house at 105 W. Water Street that used to house members of Phi Gamma Delta (FIJI), the Greek organization facing a two-year suspension after COVID-19 violations this past fall. Other additions to traditional housing include the Aberly and Heiges residence halls, which are located next to Baughman Hall on Seminary Ridge.

Describing his experience residing at the President’s Inn, Antonio Giordano ’24 told The Gettysburgian that he’s enjoying the independence that comes with his new housing. He explained that his residential space is more “like an apartment, [with his] own bathroom and television.” He added that he has more space than he had in his first-year residence hall during the fall.

“I’m grateful to be on campus, but being far away and not having a car is a struggle” – Antonio Giordano ’24

Allie Charney ’22, a resident of the Seminary, echoed this sentiment, noting that she appreciates “the comfort of Seminary,” which “feels more like an apartment than a college dorm.”

Some of Charney’s favorite aspects of living at the Seminary include the carpeted floors and wooden furniture.

Jackson Dino ’24 shared that he also appreciates his unusual living situation. Dino, a resident of 105 W. Water St., noted that the windows, floor plan, and closet space have made his experience “preferable to living in Stine Hall last semester.”

Still, the residents of these new living communities have also experienced some challenges. The greater distance from campus, for example, has proven frustrating for some. Giordano wakes up earlier this semester in order to account for the time it takes to get meals and attend his morning classes.

“I’m grateful to be on campus, but being far away and not having a car is a struggle,” he said.

Dino also noted the greater distance from dining halls, but he sees it as a minor inconvenience, describing the longer walk as an opportunity for exercise. 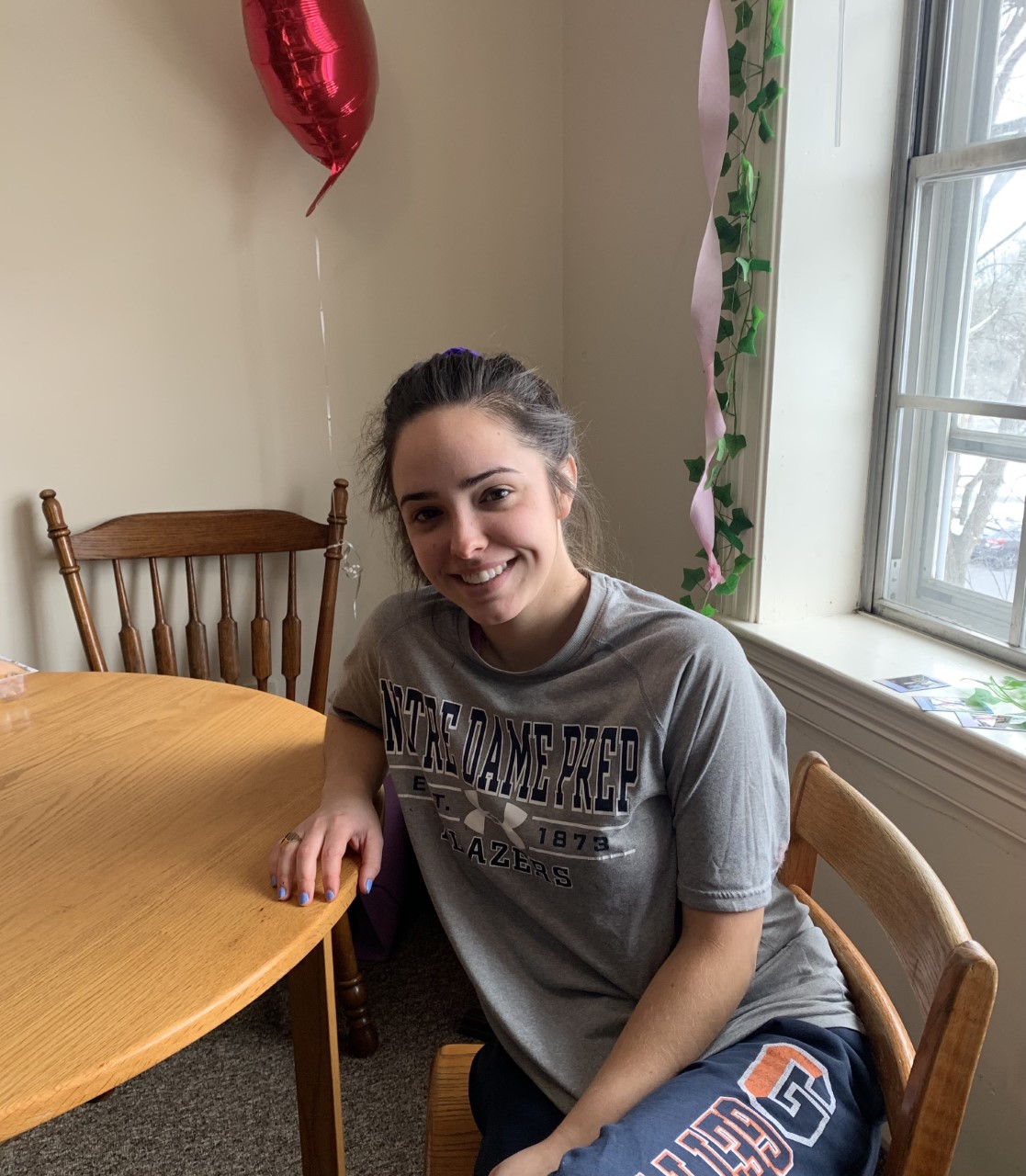 Allie Charney ‘22 in her apartment at the Seminary. (photo courtesy of Alli Dayton ’24)

An additional issue for residents of the Seminary is internet speed, which is critical during the pandemic.

“The WiFi is terrible,” said Charney. Although the college dropped off Ethernet cables to help the situation, she explained that they are only helpful about half the time. She finds this incredibly challenging due to her schedule, which includes online classes through Zoom.

“If this were any other time, I would prefer to live closer to campus,” Charney said. The health and safety protocols, however, have made it a little easier. “It is nice to feel somewhat isolated,” she explained.

Giordano added that there is also an internet problem at the President Inn & Suites. During the first week of classes, he was disconnected from several Zoom sessions with professors and fellow classmates. Residents of President Inn & Suites currently share one washer and dryer, and this laundry room is not connected to the Speed Queen app. According to Giordano, this complicates things.

Residents of these unique living communities are experiencing the benefits and challenges of adapting to a new environment. While this may be difficult, students recognized the necessity of the changes, which have been made to ensure the health of the greater campus community.

This article appeared on page 12 of the March 16, 2021 edition of The Gettysburgian’s magazine.