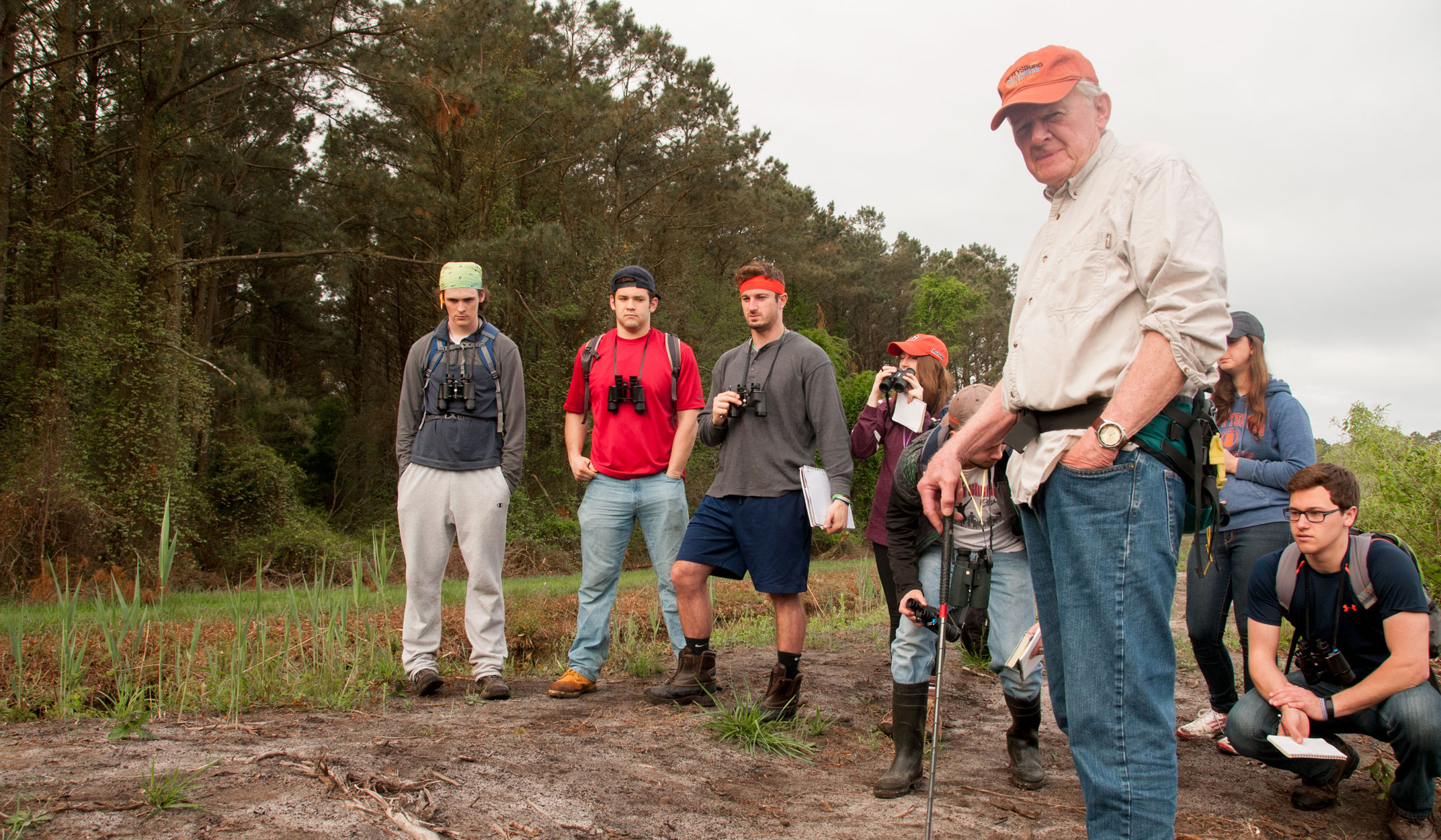 Gettysburg College lost a prolific and energetic educator, Biology Professor Emeritus John Winkelmann, who died on Oct. 13, 2020. Winkelmann retired from Gettysburg in 2013 after a tenure of fifty years. His wife, Helen, still serves as a lab instructor for the Biology Department. Winkelmann will be remembered by faculty, staff, and students in the Gettysburg community as a kind, dedicated teacher with an unparalleled commitment to his work in biology and impact on the field and in the classroom.

Decades of students have felt the impact of Winkelmann’s teaching, which is imbued by his spirit for natural history. Winkelmann researched bats and other species throughout his career; his scholarship has been published in numerous scientific publications including Tropical Ecology and the Journal of Mammalogy.

“Professor Winkelmann was tremendous at providing generations of Gettysburg students with opportunities to conduct authentic field biology,” Biology Department Chair J. Matthew Kittelberger said. “He even has a species of mouse named after him.”

Over the years, Professor Winkelmann’s research has  taken him from Mexico to New Guinea. During his tenure at Gettysburg, Winkelmann taught vertebrate zoology, a course which included a field trip to North Carolina with students for fieldwork.

“John Winkelmann was an inspiration for his unflagging commitment to natural history. He found endless value in the wild world around us,” Biology Professor Ryan Kerney said. “John was always enthusiastic to discuss a recent snake find, rare warbler, or obscure tropical salamander. His dedication as a teacher, scholar, and natural historian is something that many of us who learned from John hope to emulate in our own personal and professional lives.”

Back when Winkelmann developed the annual vertebrate zoology trip to North Carolina, he made connections with local farmers and the National Forest, providing students with an engaging experience including camping out and wading through swamps. He continued to attend these trips after retiring, joining Biology Professor Michael Caldwell to help hand off the course and ensure that students continued to have this valuable on the ground experience. Caldwell recalls Winkelmann’s lasting energy for this work well into his eighties.

“He cared a lot,” Professor Caldwell said. “I worked with him for three years on [the North Carolina] trip, and he wanted students to get out there and experience things.”

According to Caldwell, Winkelmann demonstrated incredible commitment throughout his career, and even after retiring. “He made sure that we had everything we needed to benefit from his work in any way that we could,” he said.

For Winkelmann, encouraging students to get hands-on experiences included grabbing snakes with his bare hands in swamps, or in the middle of the road, to give them a close-up look at the animals they studied. Caldwell reminisced about a time during the trip to North Carolina when Winkelmann went from taking a nap on the bus to running to the middle of the road to capture a snake in an impressive and surprising feat for his colleague and the students.

“He went from being asleep and not really able to participate to, ‘Well, now’s the time to show these students, first-hand, the nature.’ And it was a racer, so he’d run down a very quick snake for the students at 84-years-old at the time, which was very impressive.  My thought was, one: ‘Wow.’ Two: ‘Wow, I hope I can do that at his age. That’s just amazing.’”

Faculty and students that worked with Winkelmann over the years felt the impact of his infectious energy, which translated into an ineffable excitement for biology and for education.

“Even when he was in his seventies, students had a hard time keeping up with him out in the field. I had many students come back from a field trip and they’d say, ‘I don’t understand. I fall in every hole and get caught up in every sticker bush and Dr. Winkelmann seems to just sort of glide across the landscape,’” Biology Professor Kay Etheridge said. “And they would all be stumbling along behind him and he’d be catching stuff and showing it to them. So yeah, he was a real guru—sort of a Yoda—out in nature, and students really appreciated that.”

Winkelmann’s appreciation for wildlife extended from swamps in North Carolina to the classroom in Gettysburg. Biology Professor Emeritus Sherman Hendrix remembered a time when Winkelmann, an engaging teacher in the classroom and on the field, captured a porcupine and brought it back to his office to take care of it.  This is one of the many stories Hendrix recalls of Winkelmann caring for animals—and sometimes accidentally setting them loose—at Gettysburg.

“One of Winkelmann’s students captured a porcupine somewhere in northern Pennsylvania and brought it back for him where it was kept for several months until it was released back into the wild,” Hendrix recalled. “Then there were the times that one of his many large blacksnakes got loose in Glatfelter Hall and years later another one in McCreary Hall.”

Another memorable quality of Winkelmann’s was his enthusiasm for teaching in any condition, at any moment, and for encouraging students to get involved with the wildlife they studied. Biology Professor Steven James attended Gettysburg and studied under Winkelmann, who served as his academic advisor, before James joined the faculty and became Winkelmann’s colleague. James remembers attending the vertebrate zoology field trip and wading into a swamp in the middle of the night for an impromptu lesson on pike perch fish.

“In the middle of the night, [Winkelmann] wanted us to jump into a drainage ditch in the National Forest with a net and hunt for an unusual kind of fish called a pikeperch,” James explained. “I can remember being first to volunteer and [a fellow student] got in on the other side of the net. We waded chest deep through this freshwater drainage ditch and came up with a bunch of pikeperch, and John was elated.  Then, in the middle of the night, in his headlamp, he gave a lesson on the anatomy and life habits of pikeperch.”

After graduating, James joined Winkelmann on a trip to the Southern Mexican Highlands in the outside of Chiapas—around the same place where Winkelmann conducted research on the deer mouse named after him: Peromyscus winkelmanni, or Winkelmann’s mouse. James, however, traveled with him to study the co-evolution of a nectar-feeding bat with a plant species. There, James still recalls numerous memories of camping out in the desert with Winkelman, learning to eat avocado with mayonnaise—which James still enjoys to this day—and getting lost along the way while traveling in a beat-up Volkswagen bus.

James not only had the opportunity to learn from and work with Winkelmann, he also studied under and worked alongside Winkelmann’s wife, Helen, a lab instructor at Gettysburg. He remembers borrowing the Winkelmann’s canoe and being invited over to their house for dinner.

“[They are] very kind people, Helen and John,” James said. “And Helen and I have been connected because she’s a lab instructor and I’m now the instructor of the course for many years in which she’s been a lab instructor, so we have worked together quite a bit. And she was my lab instructor when I was a student. And so, the trajectory has just continued for, you know, about forty years.  It’s been a wonderful part of my life—knowing John and Helen.”

Along with his unbounded love for teaching and connecting with students, Winkelmann has left a mark as a deeply kind and compassionate force. Etheridge, his office neighbor, often had conversations with him about nature, which continued to intrigue him up to his final years.

“He was always unfailingly kind,” Etheridge said. “I’ve never heard him say anything mean about anybody in thirty years of interacting with him. That’s pretty amazing. He was a real inspiration in that way.”