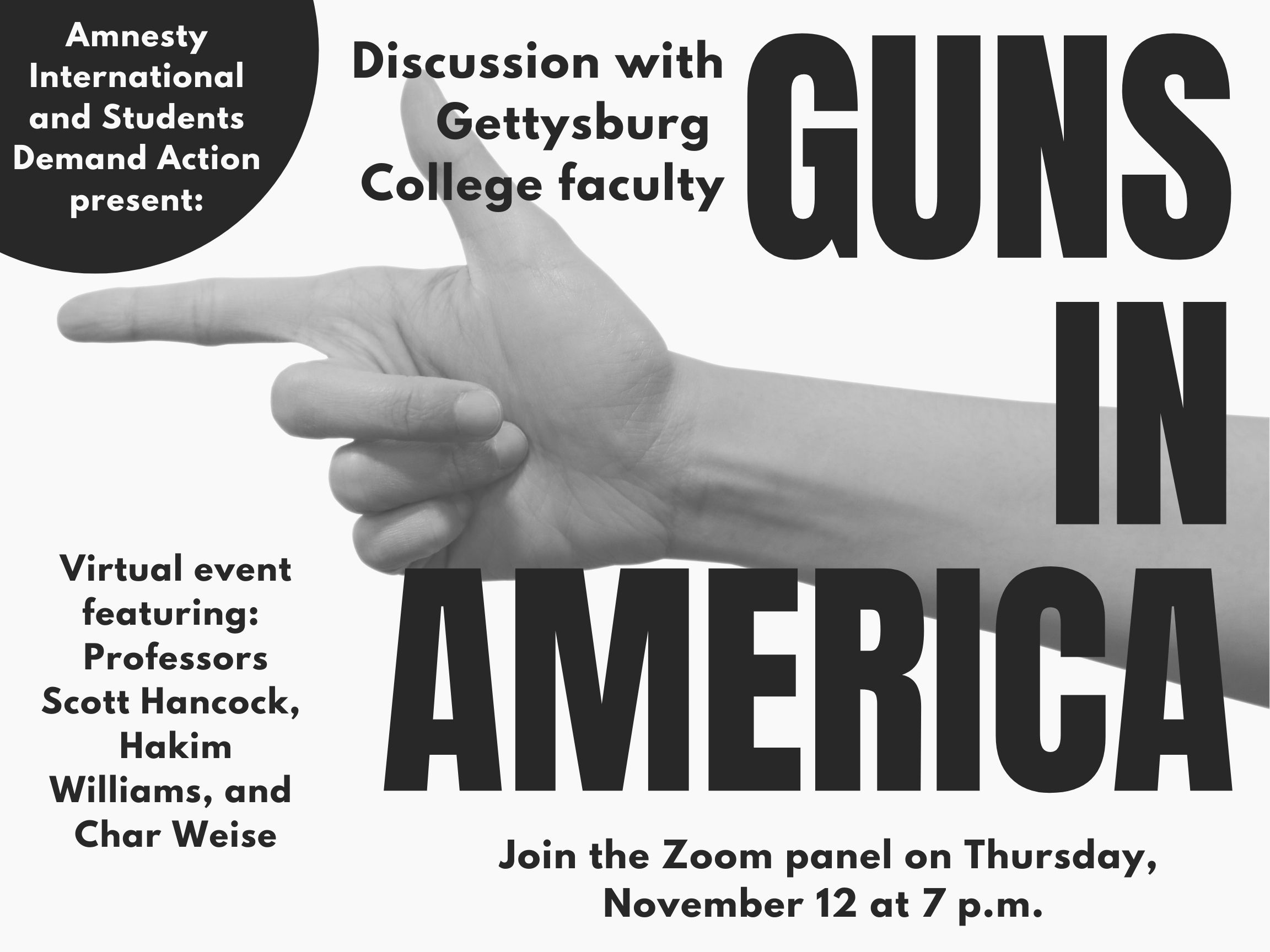 Doscher’s first question addressed the implications of the rise in gun sales following the protests of this past summer.

People who purchased guns have cited a couple of primary reasons for this,” she said. “One being they fear that stricter gun laws could prevent them from owning guns in the future or having access to purchasing guns or they might buy guns because they want to protect themselves from others.”

“It’s interesting that about 20 years ago gun owners’ number one reason for owning guns was for hunting and 20 years later, the reason was for protection,” said Williams.

“Why are firearms so intrinsic to this American identity?” Weynand asked. “Why is there such an obsession with guns and why are they associated with patriotism but gun control legislation is unpatriotic?”

Hancock went into a discussion of how different interpretations of the Second Amendment have resulted in this patriotism, explaining that the original intention of the amendment conflicts with the “originalist” Supreme Court justice interpretation.

“The problem is in public discourse it gets oversimplified that if you’re an originalist, then you understand the Second Amendment, protecting an individual right to own a gun,” he said. “When that’s not how they thought about it in the 1700s, and most of the 1800s and really well into the 20th century. It was understood as you have a right, but your right is tied to why how it serves the community.”

Doscher directed the next question toward Williams, asking him what the global perspective was about American gun culture.

Williams summed it up anecdotally as “Americans be crazy.”

“The one caveat is not trying to demonize anybody or any group is when the NRA and people who make these arguments, some of these legal scholars, they’re not completely wrong in talking about an individual right because, as I said, that was absolutely a fundamental understanding from the revolutionary era on is that people had individual right to own guns,” said Hancock.

Weynand provided the next question about what economic controls could deter the purchase of guns.

“I think the general rule that they found was that banning guns doesn’t really solve much,” said Weise, “but making it very difficult for criminals or children to get their hands on guns does have effects and…just that kind of restriction rather than a tax policy is probably what most people would recommend.”

Doscher then questioned what incentive there might be to change gun laws.

“Well, one thing that really, really stands in the way of more knowledge about this is that there is a lot of restrictions imposed by Congress on government, federal government agencies in sharing or disseminating information about guns,” said Weise. “So the CDC is is forbidden to treat gun violence as a public health matter and doesn’t do research on it. The alcohol, firearms, and tobacco agency is not allowed to share the gun tracing data that they have. And this is deliberate, this is gun enthusiasts advocates in Congress shutting off this information. So, the more data, more information, more attention by the repeal of those amendments might be one way of building a case over time.”

Williams noted that when he saw the aftermath of the Sandy Hook Elementary School shooting and the legislate inaction, “I’m not sure what we need to happen to be more cataclysmic than that… I really thought this would have been the thing to wake up Americans.”

“I think a big part of the problem is deep-seated and cultural,” Weise said.

He then compared it to how a change in cultural attitude was required to reduce smoking and drunk driving.

“Ultimately, the solution is a change in the culture that takes decades to effect.”

Doscher ended the panel by saying, “And it’s true that these gun violence statistics are pretty disheartening. But at the same time, there are so many people who are working right now to revolutionize and change society and our gun violence…So, change is happening.”