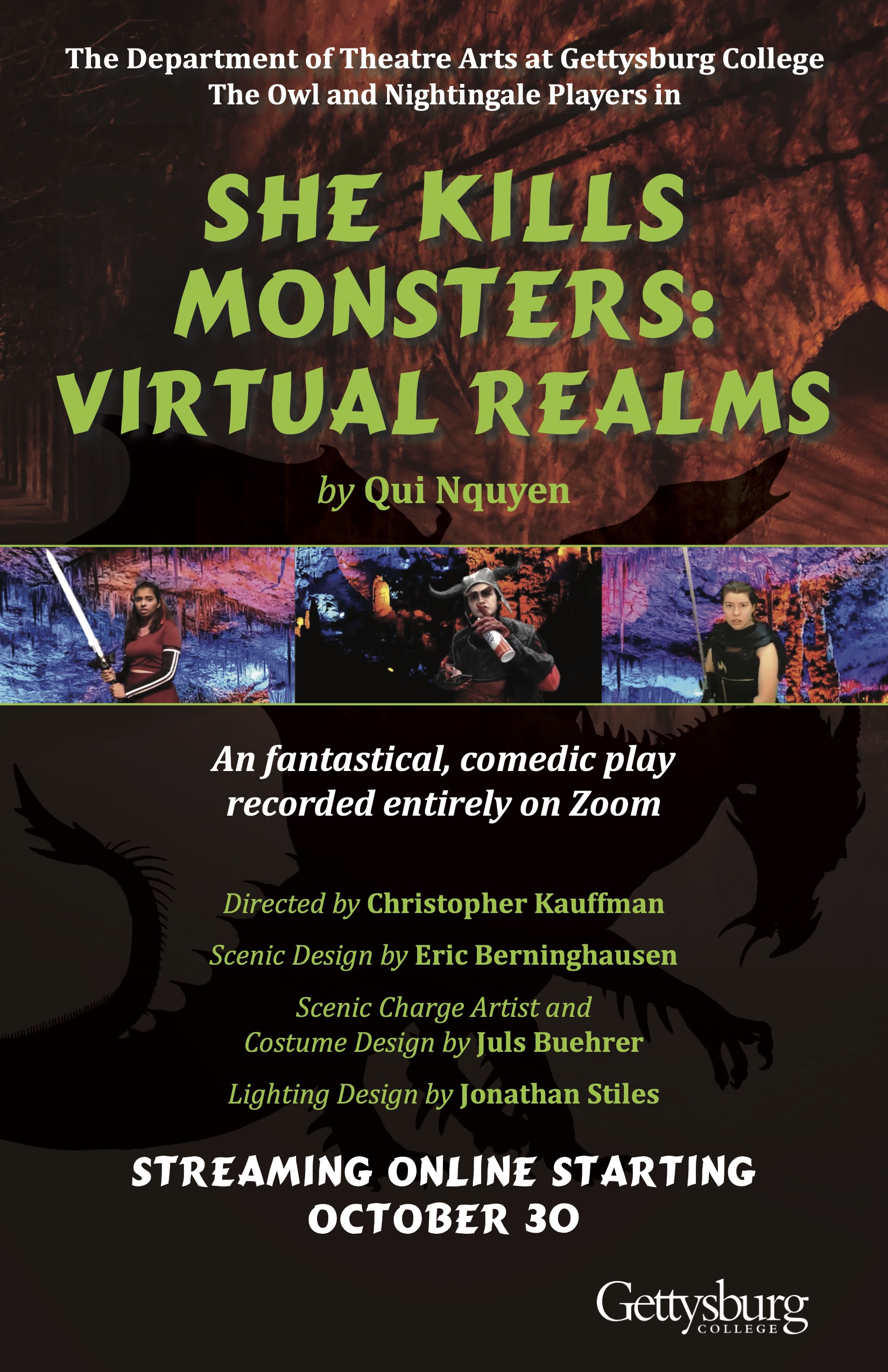 The poster for Gettysburg’s virtual production of She Kills Monsters: Virtual Realms

The theatre department has been hard at work on their upcoming virtual production of She Kills Monsters, Virtual Realms, which is set to premiere Friday, October 30 at 8 p.m. on YouTube.

She Kills Monsters: Virtual Realms is a play by Qui Nguyen that tells the story of Agnes Evans as she copes with the death of her teenage sister, Tilly. When Agnes finds Tilly’s Dungeons & Dragons notebook, she stumbles into a journey of discovery and action-packed adventure in the imaginary world that was once Tilly’s refuge. In this high-octane dramatic comedy laden with homicidal fairies, cheerleader succubi, and nasty ogres, acclaimed playwright Qui Nguyen offers a thrilling, heart-warming homage to the geek and warrior within us all.

While the cast and crew had originally planned on doing an in-person show, the college’s decision to de-densify campus complicated many aspects of the show. “It’s been a tough transition—we lost a few cast members who had to go home, and we’ve never done a Zoom play before” said Director and Theatre Arts Professor Chris Kauffman. “The technology can be a little glitchy—but ultimately the change has provided an opportunity to learn some new skills and exercise some creative problem solving. We’re making the best of it!” he explained.

The playwright has a script specifically for a virtual show—a move made in the beginning of the pandemic to account for situations like these. Gauri Mangala ‘21 describes the changes that came with the transition to a new script: “A lot of character choice[s] and plot point[s] are different, beyond the scope of it just being virtual.” Mangala plays the protagonist, Agnes Evans. “She is this regular girl who is dealing with the death of her sister and finds herself reconnecting to her through a game of Dungeons and Dragons … This [new] script has Agnes playing a high schooler instead of an adult,” Mangala said. 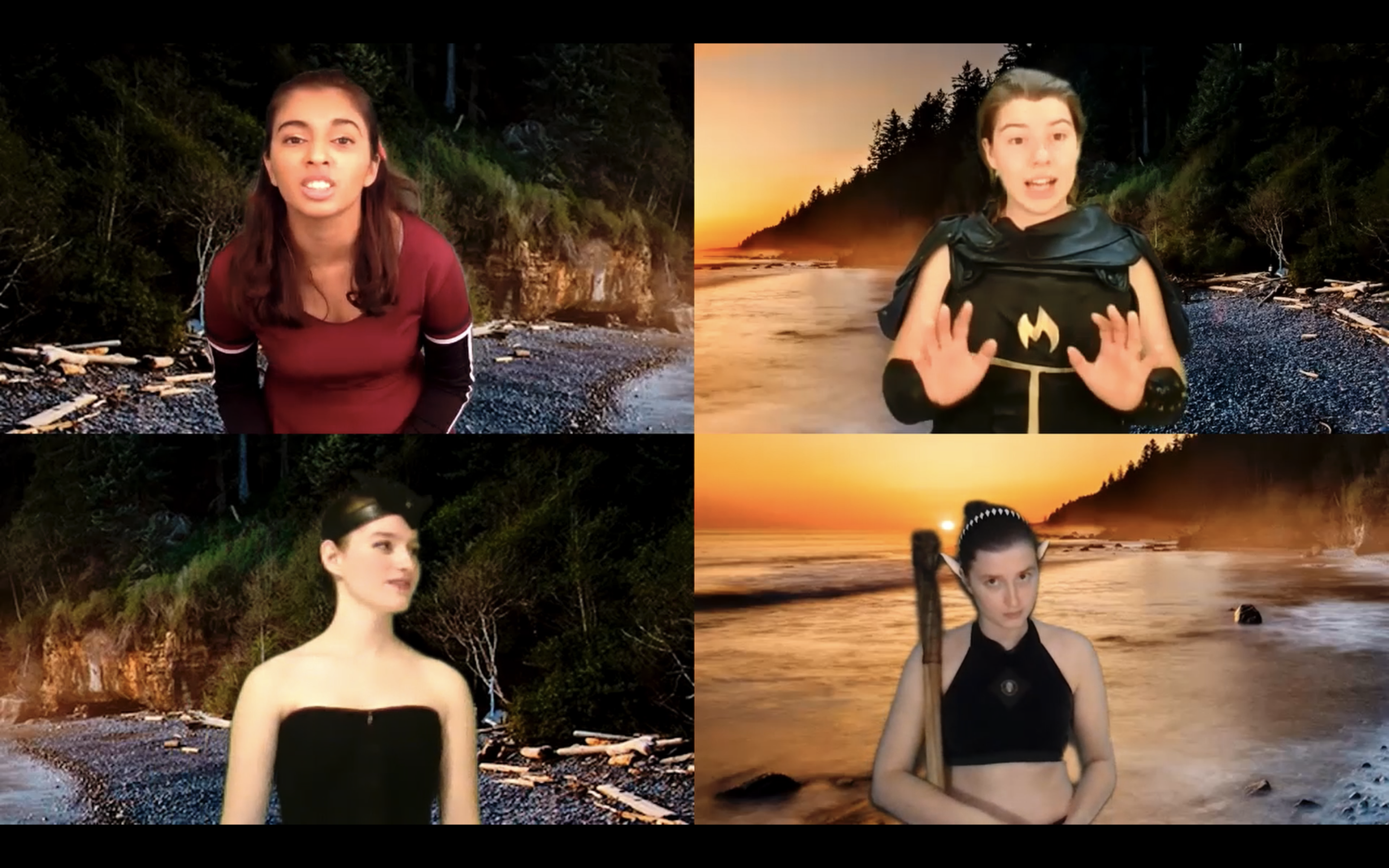 An integral part of theatre productions are the sets, lightings, costumes, and makeup. When asked about how the crew and cast are carrying out these aspects virtually, Kauffman explained that “the props and costumes have been built on site and have been sent to some cast members who are at home, along with a green screen for a set of digital backgrounds, and a lighting instrument so there can be some uniformity in lighting.”

Directing the play has been “a fascinating process” for Kauffman. “There are some actors who are taking new risks in Zoom,” he noted, “probably because they are not being watched in person and are not inhibited by the eyes of peers in the room.” He also described a new focus on detail in the cast members’ acting: “There’s a lot of good, subtle acting going on because people do not have to project beyond their natural speaking voices.”

Despite the challenges throughout the process, the cast members are happy to have a performance opportunity this semester. Libby Drew ‘24 is “just thrilled to be in the play at all.” While she was a little disappointed that the show went online, she is grateful to be part of the production. “The directors and stage managers are working really hard to make sure that it’s no less of one even though it’s online,” she said. “I have still met a lot of people and I still am excited to be doing theatre at all.” 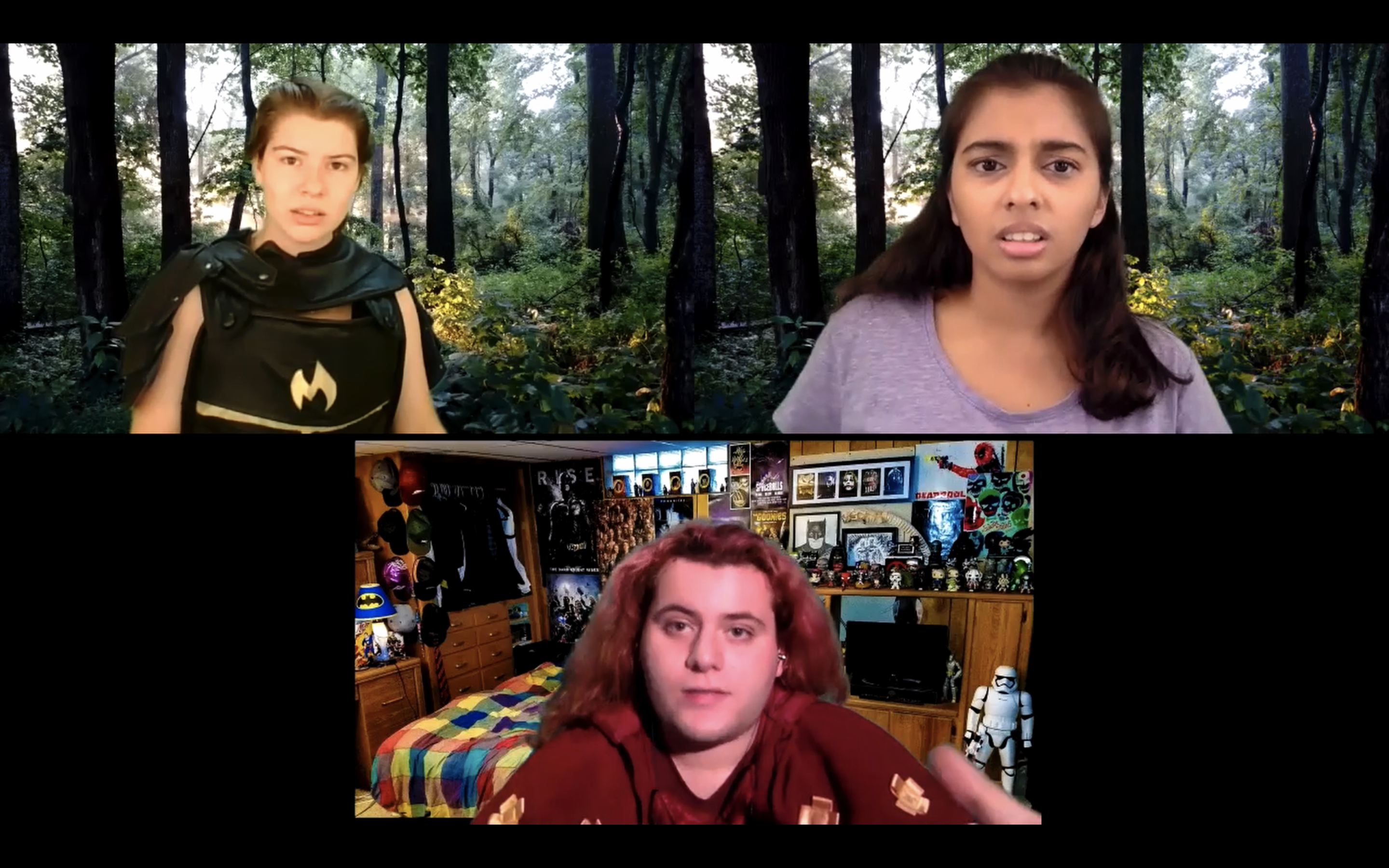 Mangala also commended the those involved in the production for their resilience. “We didn’t just cancel the show,” she said, “we adapted and learned. I think that that is the most human thing we can do.”

When asked why people should watch She Kills Monsters, Kauffman said that “the show is about the importance of the imagination in helping us solve the difficult problems we face, or the challenging circumstances we find ourselves in. It’s about overcoming personal monsters, both internal and external.” With or without a pandemic, She Kills Monsters provides an important perspective on facing the issues many deal with throughout their life.

The show will be streamed for free on YouTube starting October 30 at 8 p.m. and for several days following the premiere. Mark your calendars and be sure to attend the culmination of the cast and crew’s hard work and flexibility: She Kills Monsters: Virtual Realms.