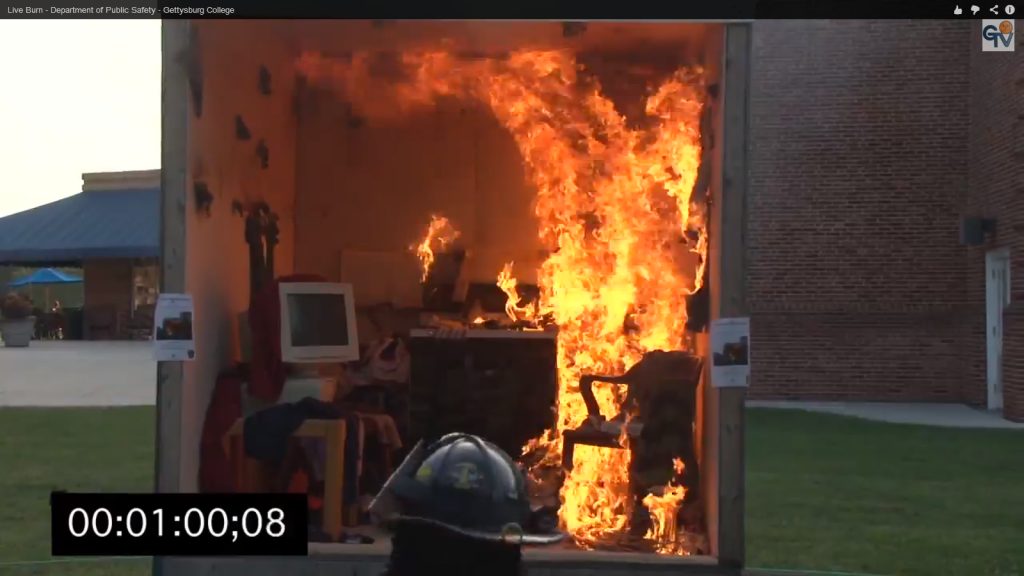 A screencap of Gburg TV’s video coverage of the Live Burn event, staged by DPS in order to teach about fire safety.

This week in 1955, the First-Years on campus no longer had to follow the freshmen customs. For many years on campus, first-years had to follow customs set in place by the upperclassmen. There was always a long list of rules first-years had to follow, including them wearing Dinks— a hat, which was often blue and orange, to denote they were first-years, signs saying their names and where they were from, and they had to participate in a mixture of events. The final event was the annual tug-of-war against the sophomores. In 1955, there were 40 violations of the freshmen customs. First-years were still expected to wear their dinks to any football games for the rest of the semester.

This week in 1990, many students had to get revaccinated for several diseases, such as measles, rubella, and mumps. The CDC found the vaccines given to infants was not the most effective, so many college students needed to get the vaccine again. However, all schools were having the same problem, so it was hard to get the vaccine to students. At Gettysburg, the college decided to give students until the beginning of the spring semester to get immunized.

This week in 2005, there was a fire in Haaland Hall (one of the Quarry Suites) because a student was cooking, and it created a small grease fire. There were no injuries and the damage was minimal. At the beginning of the semester, there had been a total of 22 fire alarms that went off, 7 because of people cooking. This week is also National Fire Prevention Week, which was kicked off by this fire in Haaland Hall on a Monday evening.