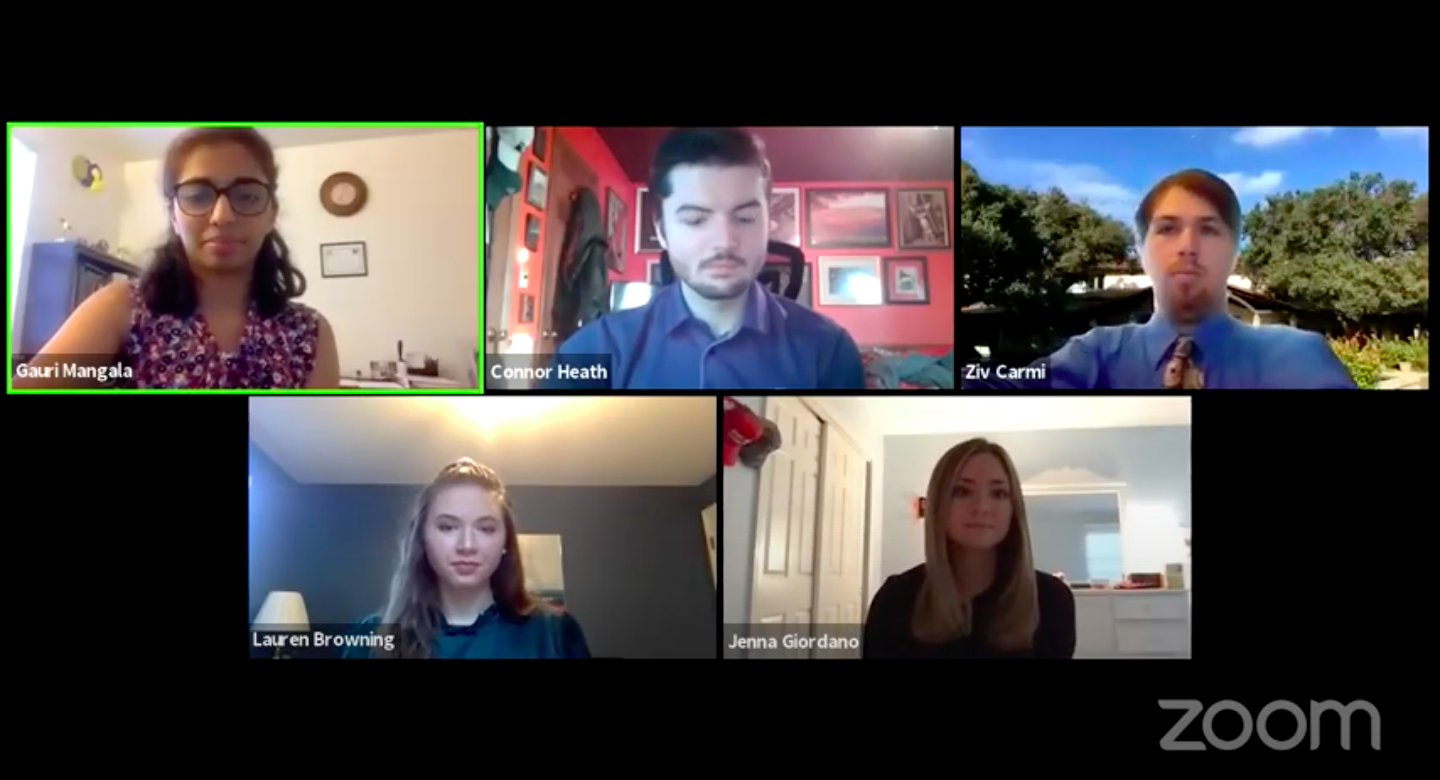 Senate executive board candidates participate in a technocratic forum on Monday, April 20

Monday night, The Gettysburgian hosted the 2020 Student Senate Technocratic Forum with the candidates for parliamentarian, treasurer, and secretary for the 2020-21 academic year. Candidates Connor Heath ‘23 and Jenna Giordano ‘23 ran unopposed for the roles of Senate Treasurer and Secretary respectively while Lauren Browning ‘22 and Ziv Carmi ‘23 are running  for Parliamentarian.

Candidate remarks began with Senator Heath who laid out his qualifications for the role of treasurer, including his attendance of Budget Management Committee (BMC) meetings—a responsibility under the leadership of Senate Treasurer—as well as prior experience in leadership, time management skills, and budgeting.

In response to a question regarding improving Senate diversity, Heath recommended a plan to cultivate a welcoming atmosphere at Senate, namely by requiring Senators to attend club events in a variety of Senate affinity groups.

“We have an Affinity Chair and a club chair for diversity; maybe Senators should have some requirement to go to multiple different club events, one having to be in the Diversity Affinity Group level,” he said. “As well as just getting the word out and presenting an open and comfortable atmosphere at all levels of Senate so that everyone feels they have a voice.”

Heath commended former Treasurer Giacomo Coppola’s ‘22 work in outreach and friendliness within the BMC, which is something he wishes to continue. He, however, voiced a desire to improve transparency of the BMC meetings so that, potentially through a message to the Senate alias, students are aware of budget approvals during the week so they have a better understanding of budget allocation and events on campus.

In terms of BMC meetings throughout the past year, Heath felt that, as a regular attendee and BMC Committee member, the members were congenial and the meetings were well-run. When asked about Senate and the Committee’s access to the student body, he said he wishes to further extend that connection and participation in BMC, particularly within the population of Senators.

“I feel like it was probably more focused towards the club representatives or club treasurers that came to the BMC more than the general population. I feel like more Senators should probably sit in on the BMC to get a better idea of what it’s like and to see what they’re voting on when we have large budget proposals,” he said.

The last question for Heath regarded the previously-discussed topic at the Presidential and Vice Presidential Forum of Senate’s amendment to rollback funding for club t-shirts, or, in some cases, uniforms. Heath was involved in the BMC’s conversation at the time, and expressed their concern about effectively handing out free t-shirts if shirts or uniforms for clubs are shared with non-members. He, however, said he would be willing to reevaluate this amendment in the coming year.

“I feel like we could evaluate it again and see what we can do to change the viewpoint on it or adjust the viewpoint so it’s fair to everyone and so that the BMC and Senate still feel like they’re using their money wisely and so it’s not going to fit someone’s wardrobe,” Heath said.

He then made his final remarks and expressed his excitement to serve as the Treasurer next year alongside the new executive board.

The forum moved to candidates for parliamentarian, Senators Browning and Carmi. Browning laid out her qualifications, including her leadership experience as president of two clubs, for both of which she maintains the constitution. She linked her experience in dissolving an executive board member from Model United Nations to the forthcoming elimination of the Clubs Liaison position in Senate during the 2020-21 academic year.

Carmi detailed his dedication to the efforts of Senate and his experience reading and contextualizing texts of law and resolutions. He expressed his familiarity with the Senate constitution and the inner-workings of guiding documents and amendments as a member of the Docent’s Guild at the Ronald Reagan Presidential Library.

Both Carmi and Browning thought current Parliamentarian Shane Carley ‘22 did well in his role, but Browning thought the individual in the role could be more active during Senate meetings while discussing policy changes; Carmi said Senate could potentially benefit from approving amendments in Senate before bringing them to committees.

“As parliamentarian, I intend to put out feelers and conduct informal surveys at Senate meetings during the policy committee’s time to present just to make sure that before I even bring it to committee, that Senate’s okay with it, and Senate, in general, thinks it’s a great idea,” Carmi said.

In their statements of purpose, the two candidates mentioned a desire to amend the constitution to make the language more accessible and less vague. Browning discussed, specifically, potentially specifying voter qualifications for the incoming executive board of Senate, which currently includes graduating seniors.

“I’d like to make sure that there are no loopholes,” she said. “There are no questions being asked when you read a document; you should know what it’s for.”

If elected, Ziv said he wishes to enforce the constitution as the supreme law in Senate rather than operating based on precedent. Like Browning, he hopes to fix smaller loopholes in the document, but also condense and simplify it to clear up potential misconceptions.

Although both candidates have not attended Policy Committee meetings, they said they feel prepared to head meetings and formulate legislation. Browning mentioned wishing to increase meeting attendance.

In terms of Greek and non-Greek student representation on the executive board, Carmi and Browning, who are both not involved in Greek Life, consider their perspectives to be important on the board, though Browning thinks Senate should be equitable to the student body as a whole, regardless of involvement in Greek Life.

Both candidates emphasized a need for clarity within the constitution; while Carmi’s Statement of Purpose included a long list of plans for amendments, a main priority of his is requiring that Senators attend events. He concluded by reiterating his dedication to representing the student body. Browning ultimately plans to improve Senate outreach and accomplish only as much as time allows throughout the year without setting overzealous goals.

Lastly, Senator Giordano voiced her organization and willingness to commit the time to her role as secretary. She thought Syd Quan ‘22 did well in the same role last year and wishes to become more involved with students outside of the Senate community and encourage participation in meetings.

“I am a very personable person. I like to talk to a lot of people and I just think I would be able to go around […] spread the idea that Senate really is there to represent the student body, Giordano said. “And I would encourage them to come and voice their opinions and senate because Senate needs to hear the voices of everybody, not just the people that are required to attend.”

Giordano said she hopes her outreach as secretary will help create a more inclusive environment and encourage participation.

While the role of parliamentarian will be voted on, Giordano will assume the role of secretary along with Heath as treasurer in the 2020-21 academic year. They will join the elected Senate President Kurtis Grey ’21 and Vice President Katie Troy ’21.

The video of the full forum can be accessed here.