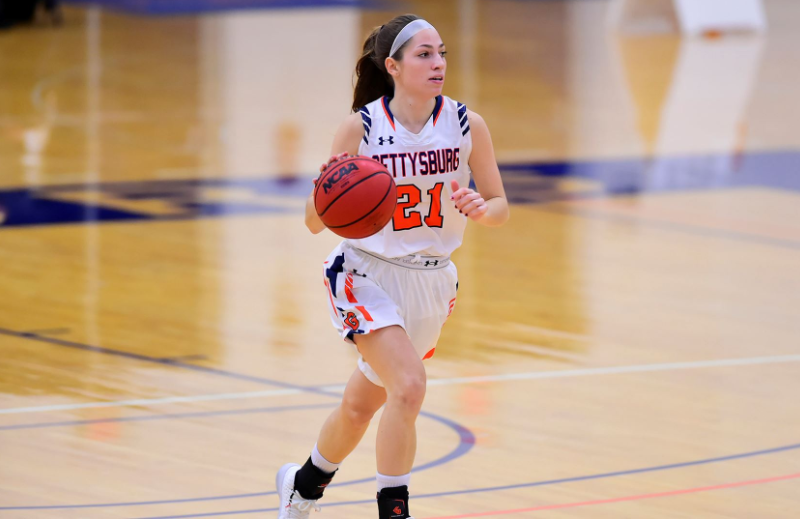 The Bullets entered the Centennial Conference playoffs with a lot of confidence. They had a fantastic regular season, finishing 22-5, and were eyeing a championship trophy to secure an automatic bid into the NCAA Division III Women’s Basketball Tournament. First, they had to play the Johns Hopkins Blue Jays in the semifinals on Friday, Feb. 28.

After a defensive first quarter, the game was tied 10-10. There was more scoring on both sides in the second quarter, but Gettysburg went into the half only up by three points. However, a red-hot third quarter gave Gettysburg their largest lead of the game, putting them up 45-33. Clutch defense and free-throw shooting from the Bullets secured a 63-49 win over the Blue Jays.

The Bullets shot an excellent 63.6% from beyond the arc and 66.7% from the charity stripe. For the second game in a row, they blocked four shots and played lockdown defense. Senior Ashley Gehrin finished with 14 points and 8 rebounds, while junior Meredith Brown went for 9 points and 9 rebounds, both women almost reaching a double-double line.

Bullets head coach Nate Davis explained how “great” it felt to “earn another opportunity to play for a conference championship.”

“It is definitely something that we know is special,” he said, proud of the success of the team.

The Bullets had to get through Haverford College, though, in order to secure their second consecutive Centennial Conference crown. They traveled to Gooding Arena in Haverford, PA on Saturday, Feb. 29 to do just that.

The Bullets came out very strong in the first half, keeping a strong offensive rhythm and taking a 28-19 lead. While Haverford’s Anna-Sophia Capizzi was strong from three in the third quarter, the Bullets were able to respond and hold an eight point lead entering the fourth quarter. The free-throw line turned out to be crucial for the Fords, who went 10-15 from the line and ended up winning in the final minutes 49-46.

Gehrin led the fight for the Bullets, scoring 18 points and shooting 75 percent from the floor. Brown and senior Emma Hahner added 9 rebounds each. Unfortunately, their efforts were not enough to top Julianna Clark and Anna-Sophia Calizzi of Haverford, who each scored 19 points.

While the Gettysburg women’s team was disappointed in their loss to Haverford in the conference championship, their season is still alive. The Bullets received an at large berth to the NCAA Division III tournament, drawing Marymount University for a first-round tilt on Mar. 6.