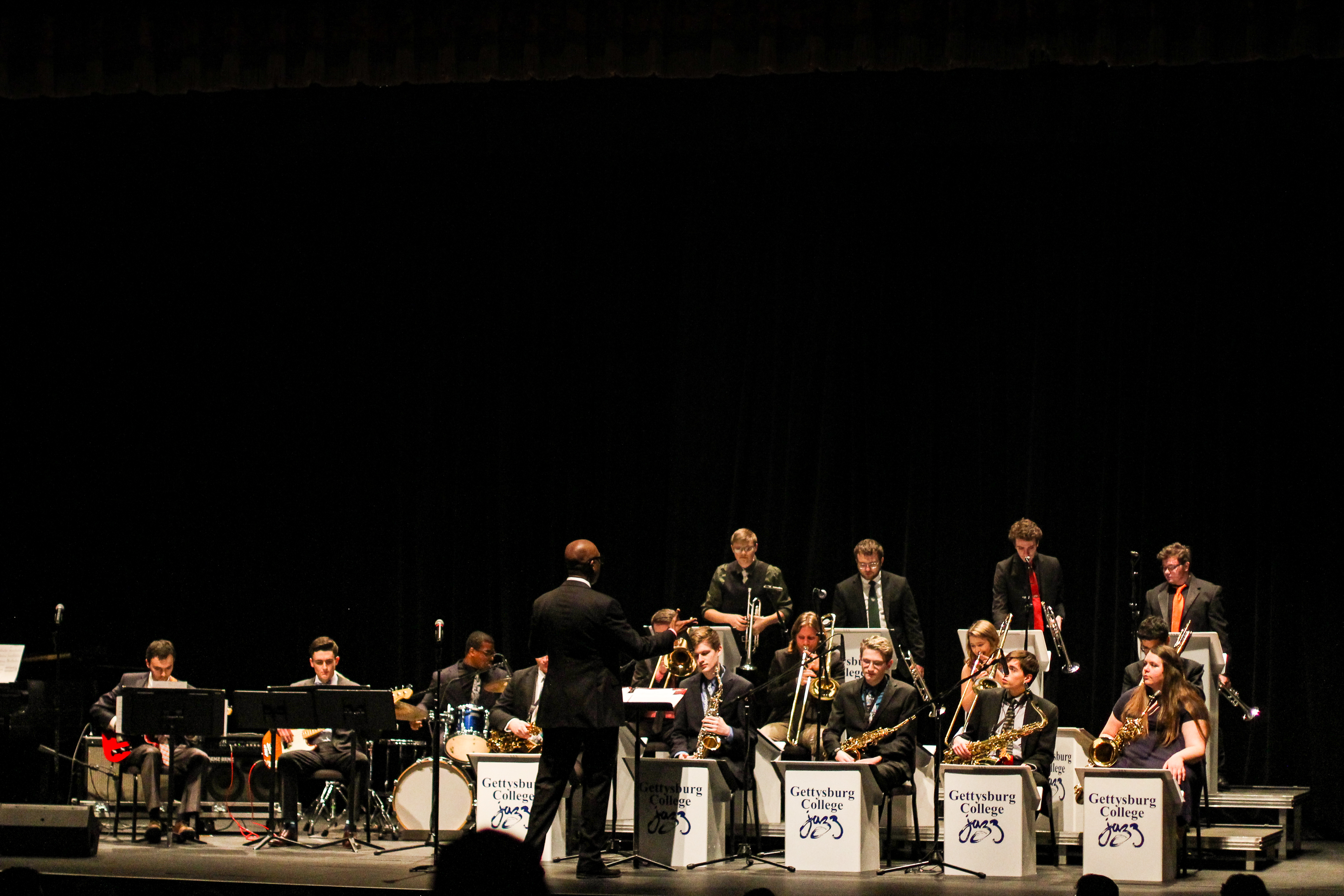 The experience of attending a concert by the Jazz Ensemble feels like attending a concert performed by a favorite band or musician, where audience members are active participants, and not merely spectators. At the “Cool Winter Jazz” concert on Feb. 28, 2020, performed by the Gettysburg College Jazz Ensemble and Gettysburg College Dispatch, both of which are directed by Paul Carr, audience members whooped and hollered for their favorite Gettysburg College jazz musicians, calling them out by name (Summer Burton in particular seems to have had quite the fan club in attendance) from the balcony as they performed a varied repertoire. It would not be an exaggeration to say that the members of the Jazz Ensemble and Dispatch occupied celebrity status for the night.

The Jazz Ensemble musicians entered the stage Friday night and took their places, welcomed by a round of applause from a very enthusiastic audience. They began with “The Woogie” by Wycliffe Gordon, with solos from Ethan Fielding ’22 on trombone, Will Esposito ’22 on trumpet, and Ben Hoopes ’22 on Tenor Saxophone, and hefty support from the trombones throughout.

They continued to their next piece, “Flying Home” by Lionel Hampton, which featured what Carr referred to as a pair of “cooperative tenor saxophones” between Gennaro Panone ’23 (better known as ‘G,’ a single letter which, according to Carr, is indicative of his celebrity status) and Hoopes. The two saxophones conversed back and forth with increasing energy, an interchange later mirrored by Max Bouchard ’20 on guitar and Ethan Tessier ’22 on trumpet. 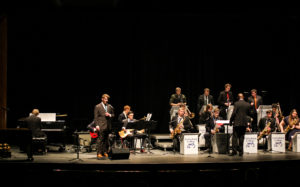 The third tune, “The Days of Wine and Roses” with music by Henry Mancini and lyrics by Johnny Mercer, featured a vocal performance by James Lamb ’21 that cannot be described as anything but charming, answered by an equally smooth solo from G.

The Jazz Ensemble then took on a tune called “Roy Allan,” composed by Roy Hargrove, who died just two years ago, and arranged by Jason Marshall. The piece seemed to be influenced by R&B and hip hop, and included solos from Esposito, Chris Peterson ’22 on piano, Fielding, Bouchard, and G, with staccato trumpets underpinning the solo sections

Next, the ensemble played “Recorda Me,” composed by Joe Henderson and arranged by Kris Berg. The tune featured a bossa nova rhythm delivered by drummer Donovan Bennett ‘19 and included solos by Collin Presser ’23 on alto saxophone, Tessier, Bouchard, Fielding, and Esposito.

To finish off the set, the ensemble played “Zigaboogaloo” (the meaning of which Carr declined to speculate) composed by Nicholas Payton and arranged by Joe Lerner. The piece opened with a duo between Otis Pierce ’20 on trumpet and G on saxophone, followed by solos from Tessier, Fielding, Esposito, Peterson, G, and Benjamin Murphy ’23 on drums. At one point, Carr swept Peterson’s music off his stand (with more than a hint of intentionality), to which Peterson gave a shrug and kept right on playing.

From there, Jazz Ensemble cleared the stage to make way for Dispatch, a smaller group with many of the same members, in addition to Kayl Murdough ’21 on tenor sax, Blaise Veres ’22 on vibes, Adiyn Connor of Paul Carr’s Jazz Academy of Music on bass, and Kai Saunders ’22 on drums. The group played two tunes, “Open Sesame” by Tina Brooks and “Midnight Waltz” by Cedar Walton.

Finally, the Jazz Ensemble returned for the final tune, “Strasbourg-St. Denis,” composed by Roy Hargrove and arranged by Greg Boyer. The piece opened with a bass riff that can only be described as cool, with snaps from the ensemble and the audience, and included solos from Tessier, Fielding, Peterson, Esposito, and Fernando Campoamor ’22 on alto sax. In the midst of the solo section, Carr walked off the stage, peeking out from behind the curtain until he made his return with a soprano sax to seal the end of the solo section.

Audience members enjoyed Carr’s introductions and commentary as much as the music itself. As Carr cruised through the repertoire, he invited the hype for the musicians onstage, and interacted with the audience with ease, candor, and, well, cool, embracing the banter from the balcony.

You can catch the coolest jazz musicians in town on Mar. 28 at 8:00 p.m. in the Junction for the Jazz Dispatch Concert, and on Apr. 25 at 8:00 p.m. at the Majestic for the Jazz Ensemble Concert as they take on the music of Duke Ellington.