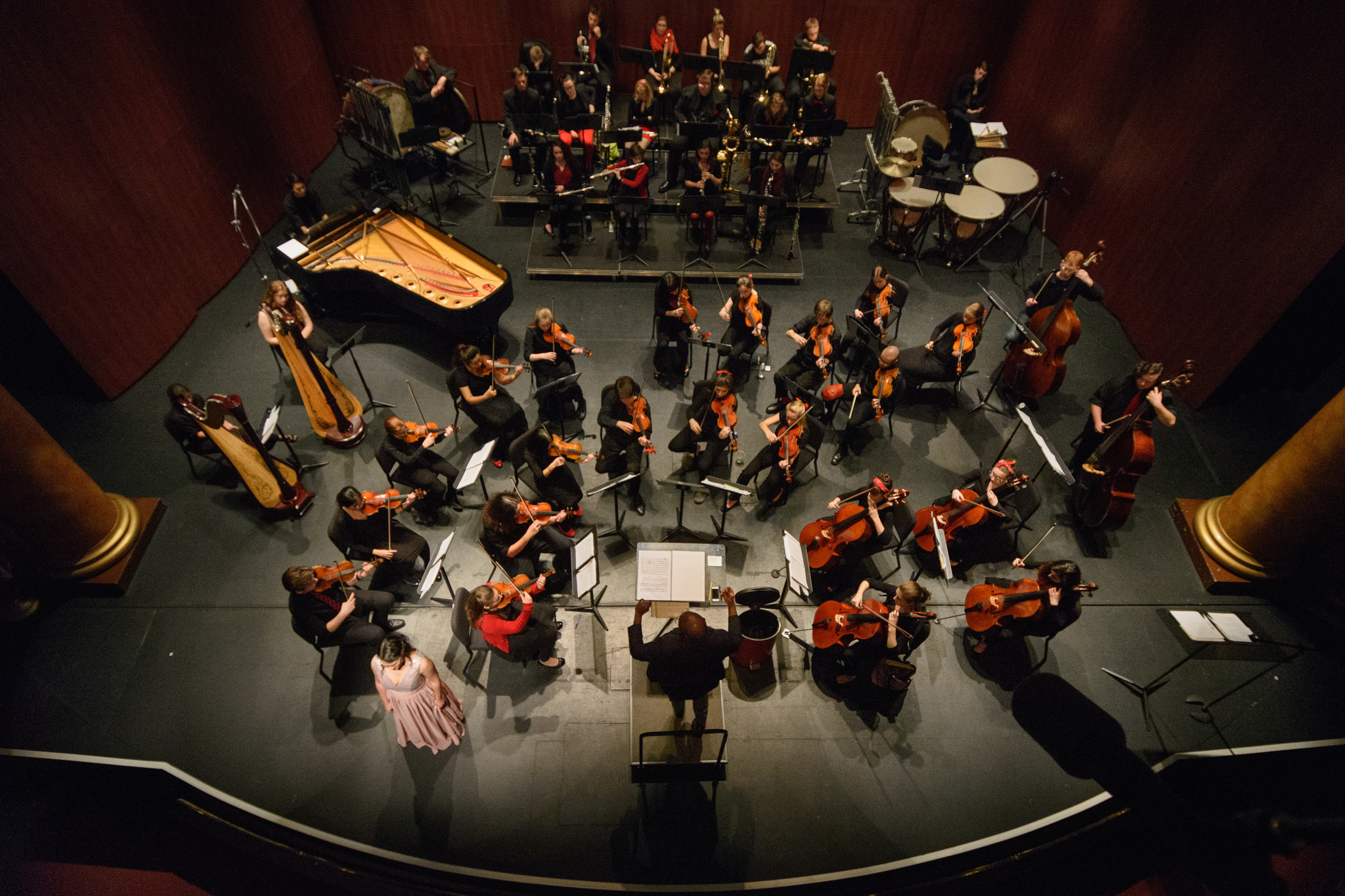 Symphony orchestras across the country have been grappling of late with how to make their performances more accessible — and thus more marketable — to modern audiences, who seem less and less  inclined to pay rapt attention to music written centuries ago by dead white guys. While repertoire choices themselves are one way that ensembles are striving to be more inclusive, perhaps more acute is the need to pierce the veil of tuxedoed pretentiousness that suffocates the possibility of genuine emotional dialogue between performers and their audiences.

On Saturday evening, the Gettysburg College Symphony Orchestra pulled back the curtain on a genre that often seems ripe for stilted presentations devoid of imagination and, instead, delivered a gutsy performance marked less by technical virtuosity — though there were certainly flashes of it — than by profoundly human artistic expression. By emphasizing the experience of making the music throughout the program, the music that was made struck amore genuine chord that led both seasoned and casual concertgoers seated near me in the balcony to lean in.

The concert opened with Terry Riley’s “In C,” an aleatoric piece in which performers have 53 short snippets of music to repeat as many times as they see fit before proceeding to the next. The motives layered atop one another in a kind of tonal entropy marked by organic moments of tension and release. About ten minutes into the piece, it seemed as if the orchestra might finally be coming together to build towards a conclusion as the mallets — located in the center of the ensemble, ensconced in a sea of strings and winds — crescendoed through a series of (what sounded like) eighth notes, ostensibly in pursuit of a climax, only for that moment to dissipate. Finally, the ensemble united in a series of alternating pitches that reached a dramatic peak before fading as the piece entered into the silence.

Violist Bridget Haines ’21 said after the selection that the aleatoric style, to a certain degree, leaves music “up to chance” and prizes the process over the product. That idea was evident throughout the remainder of the program.

The concert’s second work was Beethoven’s Overture to Egmont, music to accompany the late-1700s play by Goethe, which exalts a resistance leader condemned to death who comes to terms with his fate in a dream the night before his execution. The violinists’ earnest gesticulations underscored the burgeoning drama as a well-balanced, full sound emanated from both the strings and, in particular, the horns, who skillfully navigated thinly-scored sections with a sound that was anything but. Without low brass, the trumpets were left to drive a back-and-forth race to the finish, a feat they certainly achieved.

The program then proceeded to music from — and inspired by — the Bizet opera Carmen. Ana Vashakmadze ’22 conducted the ubiquitous overture, which was performed with fitting verve, before Leal returned to the podium along with Visiting Assistant Professor of Violin Ari Isaacman-Beck, who served as interim conductor of the orchestra last academic year and was the featured violin soloist in “Carmen Fantasy,” composed by Pablo de Sarasate.

If one only watched Isaacman-Beck’s face and body while he played, it would be easy to forget that it is a bow that ultimately brings sound out of his violin. With spectacular flair, he emotes the music through facial expression and full body movement, becoming one with the piece he is performing. He demonstrated that to remarkable effect as he handled an incredible range of techniques and effects — not to mention range of pitches — in performing the variation on Bizet’s original material. Complemented capably at various points by the familiar cello line that opens the moderato movement, a flute solo from Tess Fernald ’20, and a full ensemble build to the end that had Leal literally jumping up and down in the piece’s final few measures, Isaacman-Beck owned the stage, anchoring the piece that was decidedly the program’s emotional high point.

It was not until after that fourth piece, nearly an hour into the concert, that Leal — out of breath after the emphatic conclusion to “Carmen Fantasy” — addressed the audience from the microphone. Acknowledging the demands on performers of the music he had programmed, he called the program “a very beautiful metaphor for social change” in that it required individual grit and determination for the group to achieve at a high level. And, in recognizing Vashakmadze’s moment conducting the group, he said, to applause, “The mere act of having a female conductor on stage is a subversive act.”

The fifth piece on the program was von Einem’s Philadelphia Symphony, which opened with a meat-and-potatoes orchestral fanfare, continued with an andante movement that featured the clarinet, and, at last, displayed the full capacity of the orchestra’s brass section, a sound anchored by tubist Justin Mitch ’23.

Finally, the concert closed with “Polovtsian Dances” by the Russian composer Alexander Borodin, a piece in which numerous sections had moments in the proverbial sun. Towards the end, a timpani roll led into a massive low brass feature that filled the notoriously dry Majestic Theatre with resonant sound before a handoff to the trumpets, who ultimately led the charge to the piece’s giant conclusion.

In the final number, after the aforementioned massive low brass moments that threatened to blow the door off the place, trombonists could be seen laughing in the back row, a concrete display that musicians were enjoying the experience of performing, a feeling that was palpable throughout the concert. Paradoxically, an occasional misfire or moment of errant intonation almost enhanced the performance by affirming the imperfection, and thus the humanity, of the musical endeavor. To pull off a program of this magnitude barely a third of the way through the semester, the orchestra had to want it. It was clear Saturday night that they did.