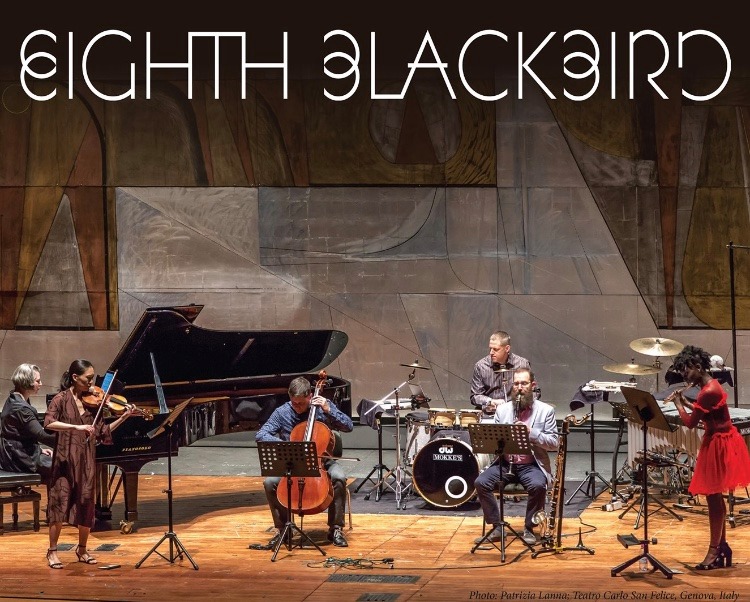 This was the third time the Grammy Award winning contemporary music sextet has performed at Gettysburg College, and their presentation of eight contemporary musical pieces brought the audience to their feet for an enthusiastic standing ovation.

A few of the composers featured in the concert were well known to the artists who have gone through Eighth Blackbird’s own musical programs. For example, Nina Shekhar, who was a composer fellow at the 2018 Blackbird Creative Lab, composed ice ‘n’ SPICE (2018), the opening number.

Eighth Blackbird made dissonance sound satisfyingly brilliant on a chilly Friday night, and their solidity as a group of individuals who hardly ever played the same rhythm in any piece was astounding.  Needless to say, the signature sounds of Eighth Blackbird were unexpectedly beautiful.

The repertoire, though mostly contemporary, was diverse in its sounds and themes. Andy Akiho’s Karakurenai (2007) brought to life the experience of synesthesia in a 31-beat pattern.  Holly Harrison’s Lobster Tales and Turtle Soup (2016) incorporated spoken word into the piece, using quotes from Lewis Carol’s Alice in Wonderland.

One of the most shocking additions to the repertoire was Jessie Marino’s Rot Blau (2009).  The group describes this piece in their program as such: “Rot Blau is a tightly knit rhythmic duo which uses synchronized and mirrored upper body movements to create small vignettes which depict the exercises of two androids.” The performance included visual elements of light and color on top of sound that left the audience in awe of the beauty of art in its full capacity.

The artists of Eighth Blackbird truly know how to use their instruments, bodies, and voices to their greatest potential, and the college as well as the Gettysburg community are grateful to have gotten the opportunity to witness their talents, free of charge but full of inspiration.