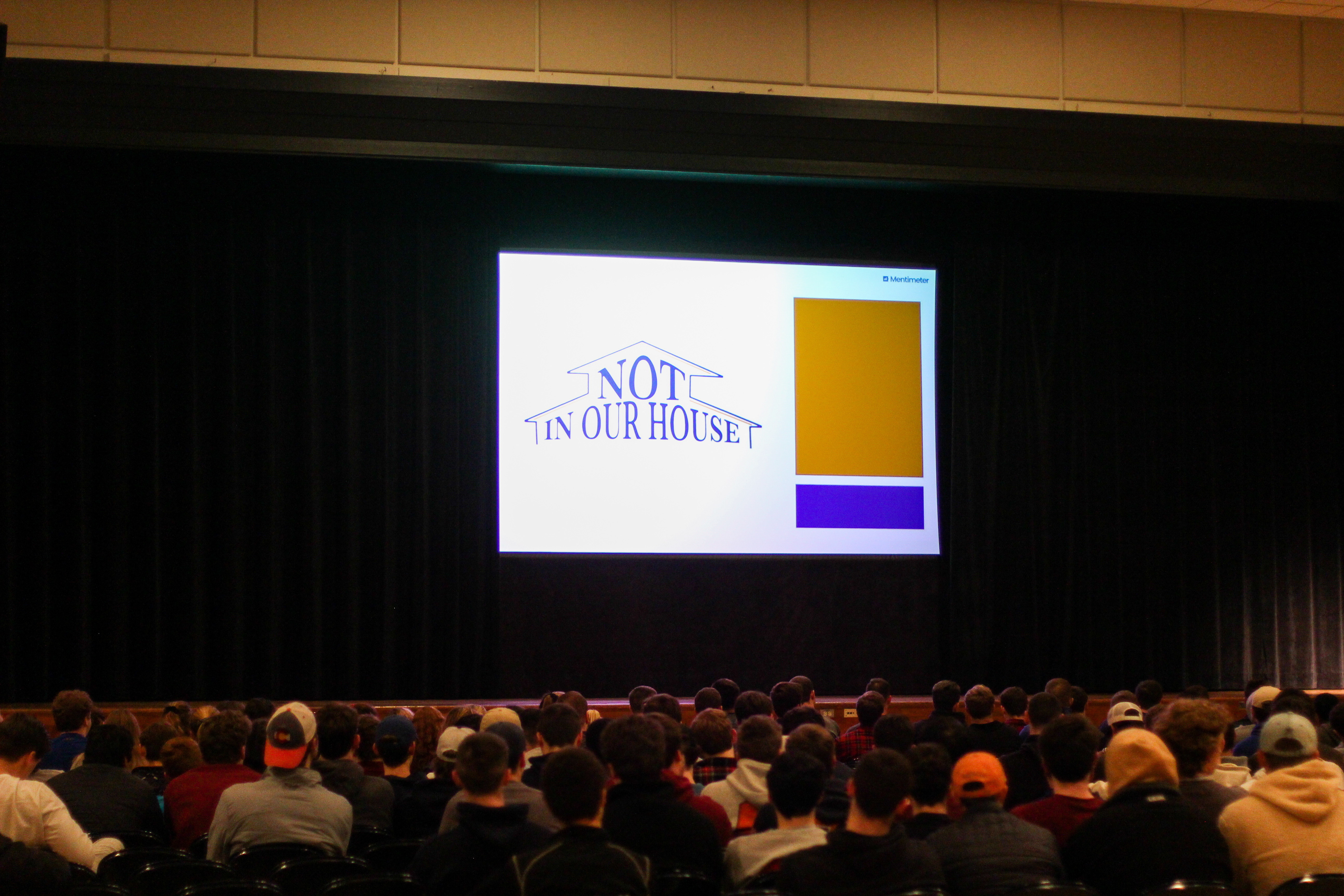 On Tuesday, Feb. 4, the College Union Building Ballroom was filled with a range of brothers from the school’s fraternities, among other students. They gathered to hear from Ryan Ahern ‘20, who presented his new campaign to fight against sexual assault, titled Not in Our House.

Ahern is the immediate past president of the Sigma Alpha Epsilon fraternity on campus. He stood in front of students on Tuesday to share his conclusion that the campus community, and Greek life in particular, need to take further action to prevent sexual assault.

He, along with many others in the room, acknowledged that too many students at Gettysburg College have experienced some form of sexual assault or know someone who has—particularly in fraternity houses.

Ahern explained that he took his own personal safety on campus for granted. He described his thought process of wondering, “Does my mom feel this way? Does my sister? Would my sister feel safe in our houses? We owe this to our communities, to our girlfriends, our sisters, and our mothers.”

Ahern wanted to change the current course of action against sexual assault by creating the Not in Our House campaign: “Instead of Greek life being the focus of the problem, I wanted us to be the focus of the solution,” he said.

Not in Our House works in partnership with the Gettysburg College Office of Sexual Respect and Title IX, along with the violence prevention initiative. Fraternities are challenged to acknowledge sexual assault and gender violence and engage in the ongoing work of combating these issues. This campaign, although similar to campaigns such as Take Back the Night, is something completely unique, and Ahern hopes to one day develop it nationally. Rather than hosting events to educate the campus on sexual assault, Not In Our House has active challenges and actions for fraternities to complete throughout the year.

To establish this widespread impact, Not in Our House provides resources to hang in every one of the fraternity houses on campus, or wherever that fraternity has meetings if they do not have a house. In addition, the group will distribute questions of the month to chapter presidents to initiate necessary discussions around these issues.

A larger, more symbolic part of the campaign involves plaques that each fraternity can earn by attending a range of events that educate them and allow them opportunities to take action. The campaign’s goal is to have every fraternity eventually receive one of these plaques.

The campaign also created a banner that they displayed in the ballroom during Tuesday’s presentation. The banner stated the pledge of the campaign to act against sexual assault and gender violence:

“We pledge that our organization will commit in partnership with campus departments and organizations, to educate our brothers on the importance of sexual misconduct prevention and awareness. We pledge that when we are made aware of an incident of sexual misconduct or relationship violence happening in our house or by one of our members, we will follow a plan of action as outlined by our national headquarters and local governance. We pledge to foster a safe and respectful community within our house and during social events. We pledge to be active bystanders and provide resources and support to those affected by sexual misconduct within the Gettysburg College community. We pledge to create a culture of consent, model respect in our own relationships, and speak out against abuse and risky behaviors.”

Each fraternity brother in attendance eventually went up to the banner and added their signature in support of the mission of the Not in Our House Campaign.

Ahern reminded students to continue to further the charge of the campaign after the event concluded.

“When we leave this room,” he said, “we cannot forget about these issues.”

Cameron Jury '23 writes for the news section of The Gettysburgian.