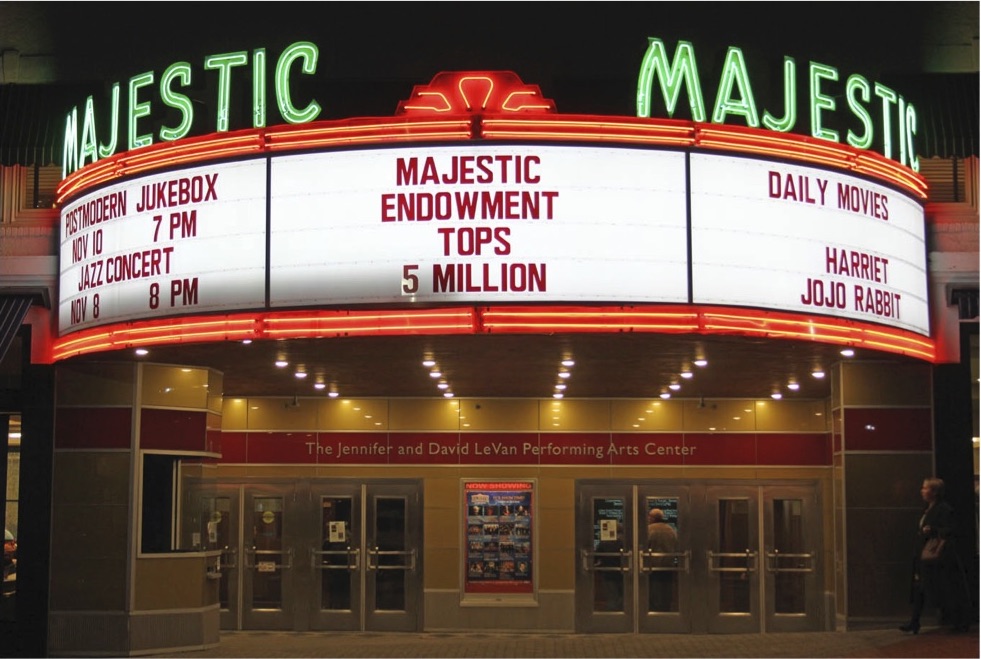 Gettysburg’s Majestic Theater celebrated its 94th birthday on Nov. 19 and announced that it has raised $5.3 million through its Centennial Endowment Campaign.

This campaign began in 2015 in honor of the theater’s 90th birthday with a goal to “raise dedicated funds to bring in bigger stars and expand the diversity of its world-class programming in music, dance, theater, and film,” according to a Majestic press release. Over 200 donors helped the theater surpass its original fundraising goal, including an anonymous local couple’s $1 million estate provision.

The endowment is invested separately under Gettysburg College’s pooled endowment and is managed by the College’s Board of Trustees.

The money raised will ensure that the theater maintains its current standard and high quality programming for years to come. More specifically, the investments in the fund will allow for an increased number of live touring performances annually past the usual amount which typically ranges from 12-15 per year. The theater may also have the opportunity to book more well known artists and widen community outreach by diversifying the programming with “world music, dance, jazz, spoken-word, and more campus-community collaborations,” according to the Majestic’s Founding Executive Director Jeffrey Gabel.

The campaign was supported by a number of community leaders including long-time Gettysburg resident and retired development officer at Gettysburg College Jean LeGros who assisted Gabel throughout the four years of fundraising.

The Centennial Endowment Committee was run by many members of the Gettysburg College faculty and staff including Interim Vice President for Development, Alumni, and Parent Relations Betsy Diehl, Graeff Professor of English Literature Suzanne Flynn, Vice President of Finance and Administration Daniel Konstalid, Vice President for College Life and Dean of Students Julie Ramsey, and other Gettysburg community members.

Gabel is the Immediate Past Chairman of the League of Historic American Theatres (LHAT), which is dedicated to operating and renovating historical theatres. He commented on the qualities of the Majestic that render it a “national model for small town theaters,” as noted by his LHAT colleagues, including its connection between the college and the community, architectural renovation, and the diversity and quality of its programming.