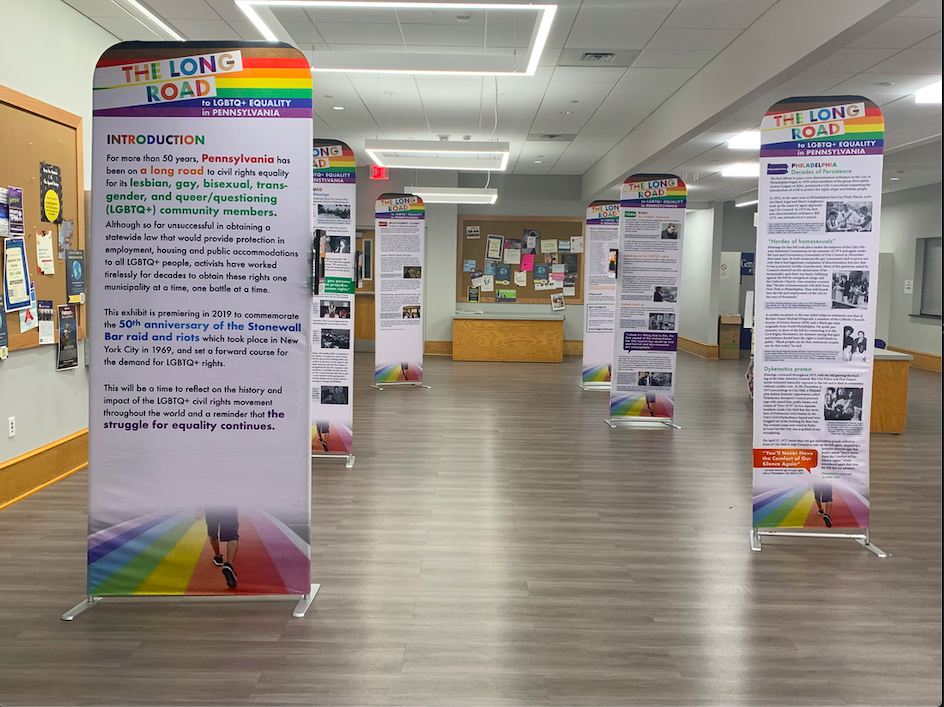 The Long Road to LGBTQ+ Equality in Pennsylvania Exhibit opened on Monday, Dec. 2, in the College Union Building Lobby. As detailed on the event calendar, this exhibit “is a traveling history exhibit that chronicles the efforts that activists have undertaken in Pennsylvania to achieve full equality for LGBTQ+ people.”

Classics Professor Rachel Lesser brought the exhibit to Gettysburg after visiting the PA LGBT History project, a traveling exhibit in the Harrisburg Archive of LGBT History and Activism at Dickinson College, with her first First-Year Seminar “Same Sex Desire: Then and Now.” The exhibit was put into place with the support of the Women and Gender Studies Department and the Gettysburg Center for LGBTQIA+ Advocacy Center.

There are currently three copies of this exhibit in areas of Pennsylvania throughout the year. In order to display it, there is an application process in which the applicant must explain the purpose of putting it up, and who would see it. Lesser underwent an application process to officially put the exhibit on display in the spring 2019 semester. After getting permission, she decided to place the exhibit in the College Union Building in front of the mailroom because she “wanted it to be somewhere that was high traffic,” to make an impact on a large population of students. She also wanted to display the exhibit before the end of the year because 2019 marks the 50th anniversary of the 1969 Stonewall rebellion, violent demonstrations by the gay community in protest of police raids.

This exhibit spreads awareness for activists all over Pennsylvania, from cities like Philadelphia to small towns in central PA like Gettysburg. The Gettysburg Borough Council came to see the exhibit with regard to their recent discussions of providing protections for local LGBTQ+ employees in Gettysburg.

The Gettysburg Center for LGBTQIA+ Advocacy Center can be contacted for more information.