Home » Sports » A Season to Remember for Gettysburg Women’s Soccer

A Season to Remember for Gettysburg Women’s Soccer 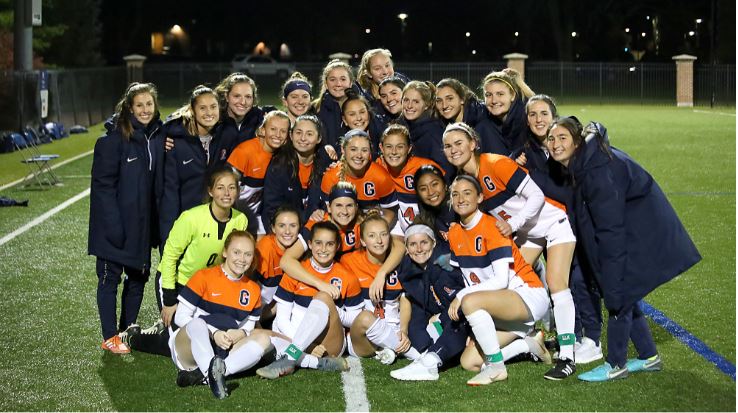 The Women’s Soccer team’s historic season came to an end on Saturday, Nov. 16 in the first round of the NCAA tournament against the back-to-back defending national champions Williams College.

Williams came out the gates with their foot on the gas and never let up. They scored a goal in the first four minutes of the game and continued to keep the pressure on the Bullets, outshooting them 12-5 in the first half.

Gettysburg’s Charlotte Cenatiempo ‘20 and Tatum Lareau ‘20 each had shots on goal that were blocked by the Williams goalkeeper. At the end of the half, Williams was able to score on a header, which ended up being the last goal of the game.

In the second half, Williams continued to keep the pressure on with four shots in a four-minute stand, but the Bullets defense would not give in. The game ended 2-0 with Williams moving on to play MIT in the next round. The Williams College Ephs wound go on to beat MIT in a penalty shootout.

Despite the loss against Williams, this was a spectacular season from the Bullets. This season, the team achieved its highest victory total since 2014 with a final record of 13-5-1, and earned their first national ranking since 2014 (#25 on 10/8/19). The Bullets started the season with an unreal 9-0 run and capped it off with their first NCAA tournament appearance since 2014.

“As a senior, it felt so great to make the national tournament. This team has worked so hard this year, and it has been amazing to see that all of our hard work has paid off. Our senior class has been pushing to achieve the goal of making the tournament since our freshman year, and when we saw “Gettysburg College” pop up during the NCAA selection show, everything came together. I felt so happy, proud, and emotional that we had finally got what we’ve wanted so bad,” said senior Brooke Priddy ‘20.

In addition to all the team has accomplished together, the Bullets had six players named to the All-Centennial Conference team. Sophomore Erika Muskus ‘22 earned first-team honors, Charlotte Cenatiempo ‘20 and Kelly Gaudian ‘22 earned second-team honors, and Brooke Priddy ’20, Molly O’Shea ‘22, and Julia Myers ‘21 each earned honorable mentions.

Though all their end-of-season accolades are a testament to the team’s hard work and skill, the Bullets did not win on pure talent. They won because of their team culture and leadership.

Before the season, the Bullets worked with the Garthwait Leadership Center to bring the team together and just discuss common goals.

“Our senior leaders this season were one of the biggest reasons why we were so successful. They were not just leaders, but role models and best friends to every underclassmen on the team.”
-Erika Muskus ‘22

On the team’s experience with the GLC, Cenatiempo said, “Working with the GLC really helped our team create concrete goals for ourselves and the season ahead. We knew we had goals that we wanted to achieve by the end of the season but the GLC really made those goals come to life by the practice of working in small groups and writing out what we were going to achieve and how. We finished the season achieving almost every single goal we committed to at the beginning of the season!”

With every successful team, there is great leadership. This Bullets team was fortunate to have six senior leaders.

Muskus commented, “Our senior leaders this season were one of the biggest reasons why we were so successful. They were not just leaders, but role models and best friends to every underclassmen on the team. They were extremely motivated and hardworking at every practice and game. They knew when it was time to be serious and when we could joke around. They created an environment that every player wanted to be around, both on and off the field, and celebrated the team’s victories instead of their own. I couldn’t thank the senior leaders enough for the legacy they left on this team. There are some very big shoes to fill moving forward.”

As all athletes know, being a part of a team creates lasting bonds. For fall sports teams, while the end of their season marks the end of the time on the field together, teammates still have another semester to look forward to spending time with one another. For seniors, this time of year is an opportunity to look back and reflect on four years of hard work and investment.

“Looking back at my four years playing for the women’s soccer team, I can definitely say I’m going to miss that feeling of winning games with my best friends. There is nothing like competing with your teammates, especially under the lights at our home field, and winning as a program. You see these girls all day every day and to work with them to achieve something bigger than yourself is the best feeling in the world,” said Cenatiempo.

From the start of early practices back in August to the final whistle against Williams, many of the players I talked to expressed that, for them, they were not just a team; they were a family.

“You see these girls all day every day and to work with them to achieve something bigger than yourself is the best feeling in the world.”
-Charlotte Cenatiempo ‘22

A group of talented athletes all committed to the same goal creates a team that can succeed as the Bullets did this year. It will not be easy to follow such a great season, but the Bullets have a lot of returning talent.

Head Coach Matt Garrett said a season like this bodes well for the program’s future.

“This year hopefully showed the team and players what it takes to be successful on and off the pitch, but also what extra is needed to become an elite program in the future,” he said.

The loss of six seniors will be felt, but the squad will surely have hopes of returning to the national stage next year.