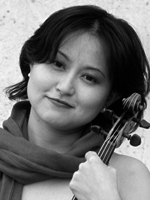 Yeon-Su Kim, Professor in the Sunderman Conservatory of Music and esteemed violinist, passed away this weekend. (Photo courtesy of Gettysburg College)

Sunderman Conservatory of Music Professor Yeon-Su Kim passed away this weekend surrounded by her family in her home of Seoul, South Korea after an extended illness, according to an email sent late Tuesday night by Provost Chris Zappe.

An accomplished violinist, recitalist, chamber musician and esteemed teacher, Dr. Kim was the first violinist of the Cosmos Quartet and performed internationally while under the residencies of the Audeamus Quartet and Tokyo Quartet. She won numerous awards, taught and performed at festivals, and performed for BBC Radio and German National Radio.

In his remarks, Zappe mentioned Kim’s dedication to teaching, citing one of her colleagues describing her as “the type of colleague with whom one could have highly engaging, wide-ranging discussions about music and life.” She is thought of as a “very talented and kind” individual, who always worked to improve the Conservatory.

The date for a memorial to celebrate her life, planned by the Sunderman Conservatory, will be disclosed at a future date, Zappe mentioned, and the college extends its deepest condolences to Yeon-Su’s husband Eduardo Leandro as well as her family, friends, colleagues and students.