Gettysburg College spends less per student on instruction than any of its closest peer institutions, an analysis based on data from The Chronicle of Higher Education conducted by The Gettysburgian shows. Annual tuition (excluding room and board) for the 2016-17 academic year, the year for which The Chronicle compiled a comprehensive data set, was $50,860. 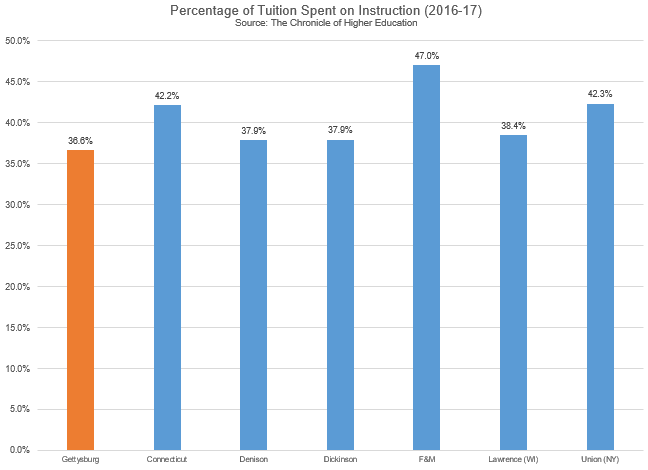 Percentage of Tuition Spent on Instruction (2016-17) (Source: The Chronicle of Higher Education)

While not all colleges publicly release data that would allow for accounting the second figure, Gettysburg ranks third-lowest among its peers raw per student spending on instruction and lowest for percentage of tuition spent on instruction. 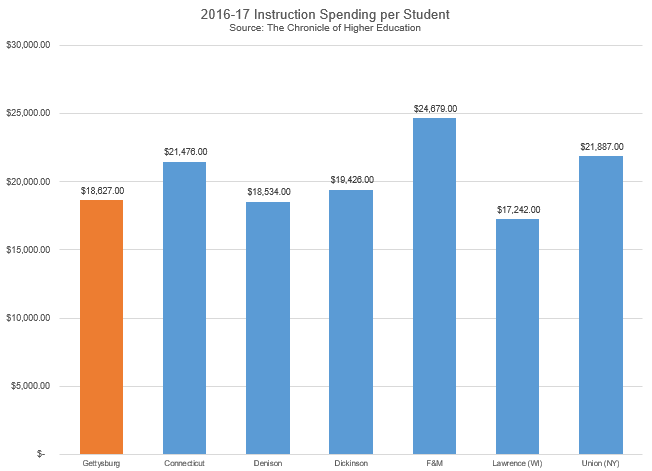 2016-17 Instruction Spending per Student (Source: The Chronicle of Higher Education)

Jamie Yates, Executive Director of Communications and Marketing for Gettysburg College, said that the latter calculation is the best reflection of value to students. Splitting the two, she argued, sets up apples-to-oranges comparisons.

“The designation of academic support versus instruction spending is an accounting differentiation,” Yates said. “In practice, we prefer to look at the overall academic program as a whole rather than letting accounting standards dictate the allocation of resources.”

She did, however, point to a definition from the National Association of College and University Business financial accounting and reporting manual to differentiate between the two, and she did not explain how Gettysburg’s calculations might differ from how other institutions distinguish between the types of spending. She did note, however, that, together, the two categories of spending comprised 58 percent of the college’s total expenses during fiscal year 2017. 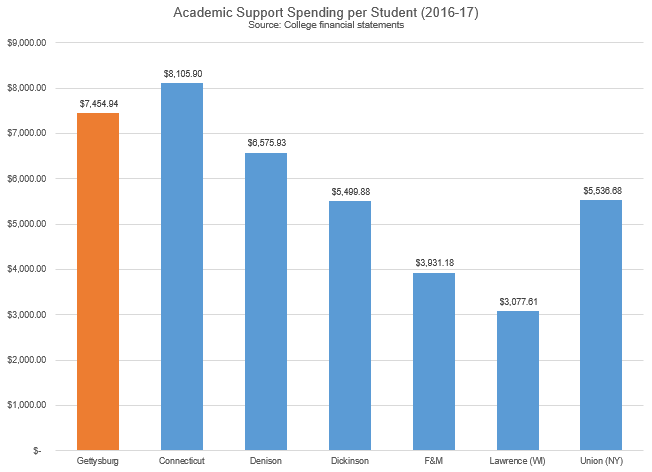 “Students from the most disadvantaged backgrounds appear to gain the most from instructional spending at schools,” the paper added. “Academic support spending benefits those from high-income households.”

Additionally, in terms of helping students to find jobs that match what they studied, academic support was negatively correlated.

“Across almost all groups,” the paper wrote, “graduates from schools who spend more on academic support services are less likely to be in a job that matches their field of study.” 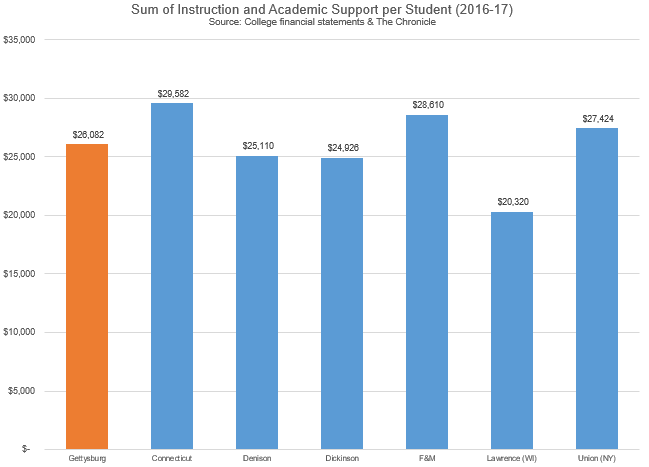 In an interview with Inside Higher Education published while the paper was under peer review, Adrianna Kezar, Director of the Delphi Project on the Changing Faculty and Student Success at the University of Southern California, said that colleges “have built a gigantic infrastructure of student support outside the classroom without examining what is actually most important,” adding that “student support is best contained in classroom [sic].”

Even so, Gettysburg faculty salaries rank in the bottom half in comparison to the college’s peer institutions according to data from the American Association of University Professors Faculty Compensation Survey. At the full professor level, only Lawrence University ranks lower than Gettysburg, while, at the associate and assistant professor levels, Gettysburg ranks fourth of seven. Given that student to faculty ratios at each institution are similar (between 8:1 and 10:1), Gettysburg still appears to fare poorly relative to peer institutions in terms of spending per student on faculty salaries. 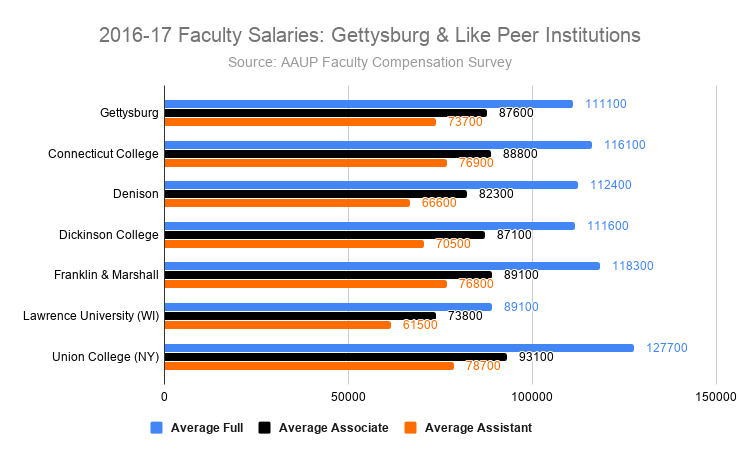 The college continues to assess how best to deploy financial resources. In an email to college staff sent at the beginning of the academic year, President Robert Iuliano and Provost Christopher Zappe said that, as the financial landscape continues to evolve, the college will need to work to balance a range of competing priorities.

“[W]e asked many across campus to examine their department and divisional budgets and to identify ways to take fullest advantage of their resources,” they said. “This work is difficult, but it is an underlying responsibility we share as stewards of this institution.”

This article originally appeared on pages 10-11 of the October 31, 2019 edition of The Gettysburgian’s magazine.