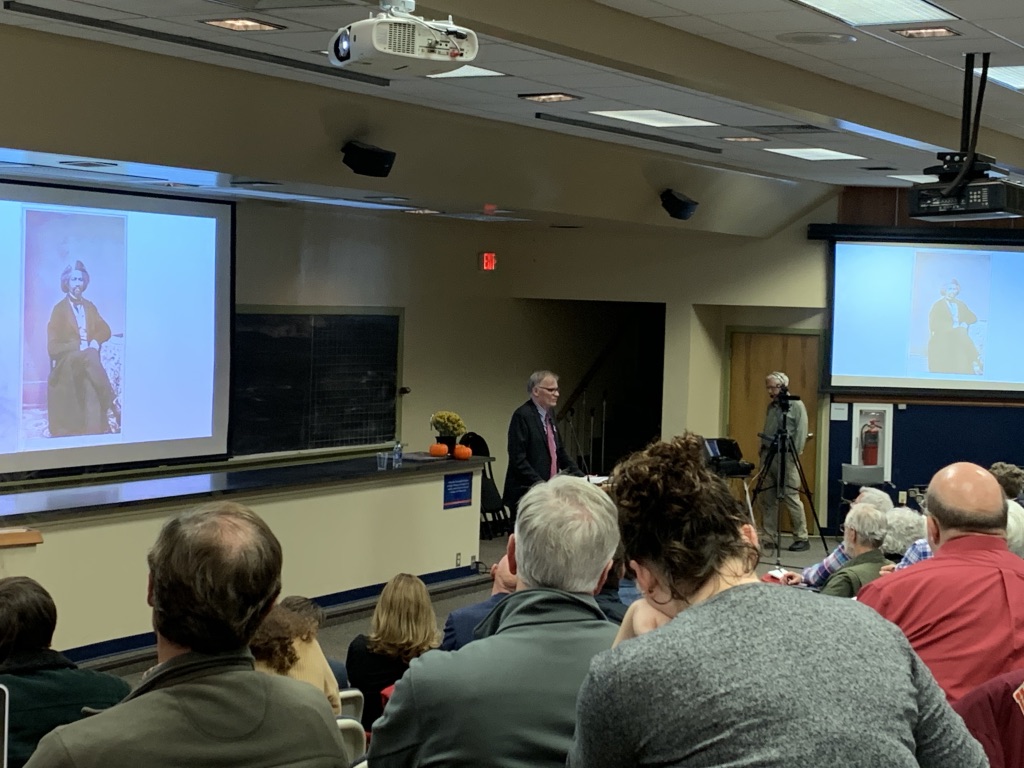 Blight was returning to Gettysburg, one of the historical sites he had visited as a child and Michigan native more than fifty years prior. He walked the battlefield before speaking that evening, enjoying the autumn weather, describing it as “nostalgic, important; it’s all still there.”

The Frederick Douglass biography written by Blight, published in October of 2018, follows suit with numerous retellings of the significant abolitionist, writer, and orator, including autobiographies of his own. Blight, although daunted by the idea of tackling Douglass’s tremendous story, ultimately decided to take on the project after visiting a private collection of Douglass memorabilia in Savannah, Georgia.

“It was hard to believe when I first saw it,” Blight said.

He then spent his spring breaks and weeks off in the archive, typing hundreds of pages of notes, particularly uncovering the last third of Douglass’s life.

Born in Maryland in 1818 “in the backwater of the American slave society,” Douglass lived to be 77 years old, though much of his widely-taught history spans the first 17 years of his life. Blight hoped to put readers in touch with the older Douglass who fell out of touch after the Civil War, and is, according to Blight, in “some ways more fascinating” than the young Douglass.

“That’s a hell of a trajectory if you’re a biographer,” Blight said of Douglass’s timeline as a radical reformer who saw the triumph of his cause at age 45 and then lived for 30 more years.

Blight unpacked Douglass’s complex family history for the project, noting that he was the patriarch of a large, dysfunctional family, which included adopted brothers and sisters.

“Douglass’s family had all kinds of troubles, bankruptcies, difficulties, separations, divorces, and so on,” he said.

Blight revealed that Douglass, although a fascinating historical figure, had his own flaws, including some rivalries with the younger generation of college-educated African Americans. Blight also delved into facets of Douglass’s private life, including information about his wives and children in his biography. “That other side of his life,” he said, “you have to find ways to get there.”

Along with living to see the victory of his cause, Douglass experienced a new era of modernity that defined his actions for reform, including the railroad and steamboat, on which he made treks as travel gradually picked up speed. Blight said that Douglass’s voice was never recorded, although right before his death he wrote a gushing letter in response to hearing a voice recorded on a phonograph for the first time, referring to it as a “divining invention.”

Blight disclosed the one rule he vowed to follow throughout the writing process of the biography: no standalone chapter could be about just his wives, public life, or private life. He aimed to mix all the staple elements of Douglass’s world as equally as possible throughout the book for the most accurate telling.

The book, according to Blight, follows six key themes: Douglass’s words, biographies (as both sources and subjects), the Bible, the transition from radical outsider to political insider, balancing both public and private life, and Douglass as an intellectual.

Blight frequently riffed on Douglass’s brilliance; he chose to examine autobiographies because they were vitally revealing sources of Douglass gaining literacy and discovering his identity, plus he told a compelling slave narrative, written with an inherent “obligation to represent his race,” he said.

Beyond that, Blight was fascinated by Douglass’s way with words, calling him a “magician with prose.” Douglass’s words have been studied by political theorists, literary critics, constitutional scholars, and philosophers alike. “He was a serious thinker,” Blight said. “He was a man of mind as well as might.

He explained his reasoning for referring to Douglass as a prophet in the title of the book, using the phrase “assaulter of our mind” as rationale.

“Prophets tell us what we don’t want to hear. We’re creatures of denial. He’s a prophetic prose poet of this idea we call America.”

The lecture closed with Blight unpacking Douglass’s “The Composite Nation” (also referred to as “Our Composite Nationality”) speech. In it, at the height of Reconstruction, he contends that the nation had to be destroyed to be reinvented while maintaining utopian optimism for the future of the country.

Blight also highlighted Douglass’s references to nature in this last bit before fielding questions from the audience, quoting a line that sums up Douglass’s theory and unparalleled mind: “a smile or a tear has no nationality.”