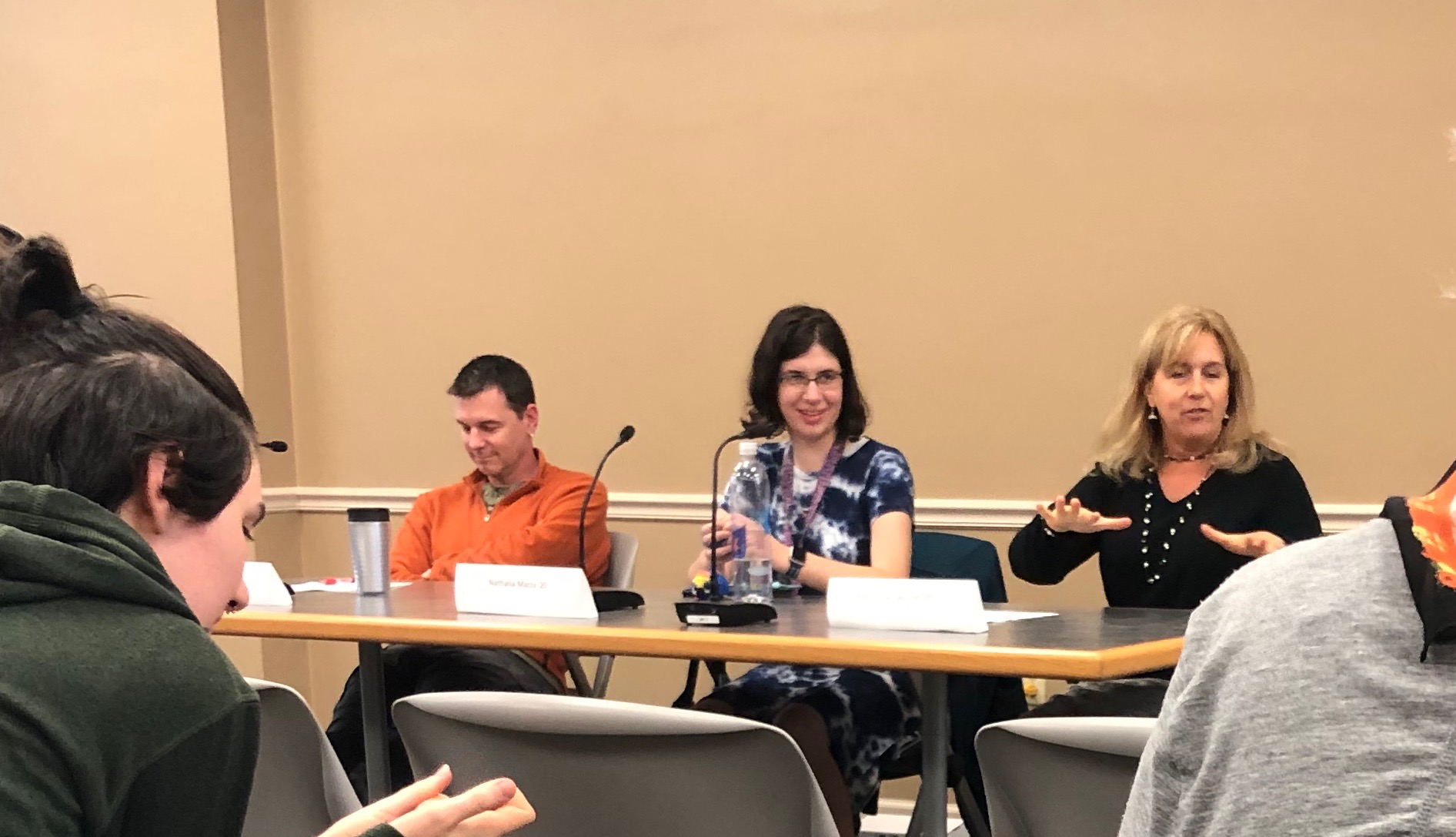 On Tuesday, Oct. 29, two faculty members and one student conducted a panel discussion for the Second Annual Disability Awareness Month Program. This event was open to everyone on campus and sponsored by the Americans With Disabilities Act (ADA) Committee. Forming the panel were Biology Department Chair Matthew Kittelberger, Lecturer in the Department of Psychology Katherine Delaney, and Nathalia Mazza ‘20.

The energy in the room was supportive and positive, and Mazza was buzzing with excitement for the event to begin.  She eagerly hugged several friends and professors she knew who had come for the panel.

Kittelberger opened the discussion by providing an understanding of the science behind autism.  He explained that “Autism is tremendously heterogeneous” and the idea of the “spectrum” can “highlight the diversity and heterogeneity.”

He noted that when we want to be supportive of the members of our communities who live with autism, it is important to realize that not everyone on the spectrum has the same experiences.  Whether they are our roommates, friends, colleagues, teammates, or students, Kittelberger said, “There’s really no one-size-fits-all approach.”

Kittelberger also addressed the way we talk about autism with each other and with those of us who are on the spectrum, mentioning that it is important to understand the potential sensitivity of the topic. “Defining it as a disorder can be insulting,” he said. “We like to avoid the use of the word ‘normal…’ This suggests the existence of an ‘abnormal.’” Kittelberger recommends the use of the term “neurotypical” instead.  At this point in the discussion, he projected a slide which maps autism as a varying distance from what we would consider neurotypical. 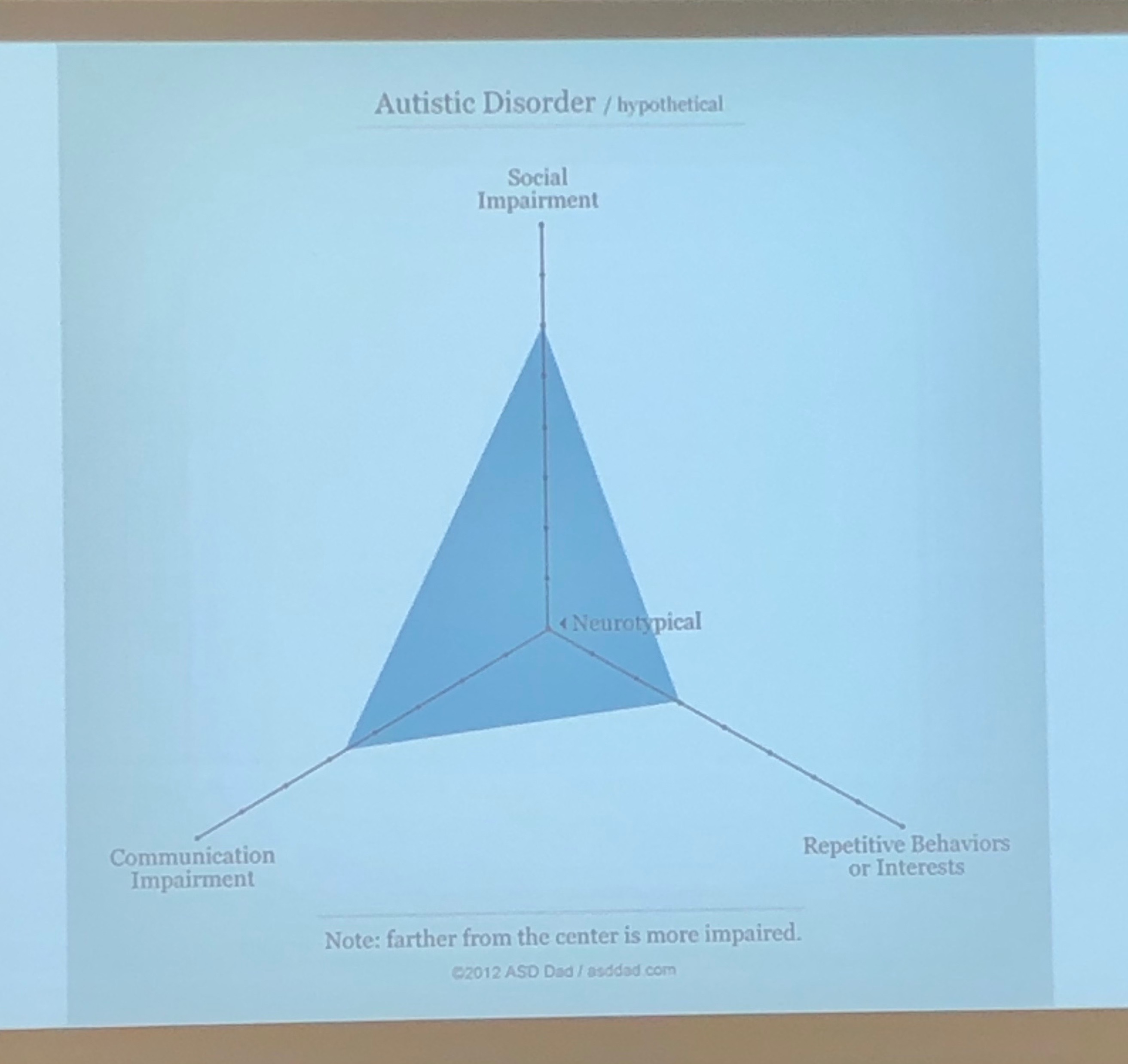 It was noted that socializing can be particularly challenging for many individuals living with autism. “College is a really complicated social environment,” Kittelberger said. Those on the spectrum can struggle with social cues and reading body language, which can make living on a college campus very difficult.

Kittelberger included in his statement the advantages of autism as well.  He said that autistic individuals can have a “tremendous ability to remember details,” have a particular talent in mathematics, and store an impressive amount of knowledge concerning specific topics.  However, these skills can also mean that for them, “The autistic mind has difficulty with executive function” and “it’s hard to detract general meaning” particularly in lectures or classroom lessons. Organization and priority forming can be particularly challenging.  Kittelberger also mentioned that many people see comparisons of autism with ADHD, specifically considering these classroom challenges.

Throughout history, autism and the spectrum have been largely misunderstood and placed in a negative light. Mothers were blamed for their children’s conditions, for example. Kittelberger stated that “vaccines do not cause autism.”

Kittelberger closed with a few remarks on the importance of recognition of autism in our campus community and respect for those on the spectrum. “Autism affects one to two percent of the population,” he said, continuing that we want to provide a happy and safe environment for individuals on our campus who are a part of this percentage by understanding “how we can help those folks thrive here.”

Mazza took the floor next.  She introduced herself and said, “I was diagnosed with autism my freshman year of college.  My whole first semester was a disaster.” She was open about her experiences struggling with anxiety and panic attacks, but provided the disclaimer: “My experiences are only one person’s experiences with autism.” As Dr Kittelberger had mentioned earlier, everyone with autism has a unique set of advantages and disadvantages because of its diversity as a disorder.

Social interactions, Mazza said, have been her biggest challenge.  As a child, she was able to have mature conversations with adults, but she also had a “childish side.”  One of Mazza’s favorite activities was pretending to be various animals. She commented, “I just felt really connected with animals.”

In regards to education and social classroom settings, Mazza said, “My knowledge was only in the things that I was absolutely interested in, and I wasn’t really willing to be exposed to anything else unless I chose to do it.”  This is considered a common trait among people who have been diagnosed with autism. Mazza’s special interests have included the Jonas Brothers, diabetes, Doctor Who, and horseback riding.

Mazza claimed that for her, socializing can be anxiety inducing. She said, “I don’t really know how to talk about anything other than my interests.” In Mazza’s case, she doesn’t struggle as much with smaller groups, but larger crowds can be overwhelming.  She may begin fidgeting or, she said, “sometimes I start rubbing my hands together.”

Other challenges for Mazza happen in the classroom setting.  She mentioned a struggle in finding the energy to sit down and do her homework at times, but she said, “I have trouble going to professors for help….I’m afraid that… my professors are going to think less of me.” Delaney addressed these obstacles later on during the discussion.

In moments of excitement, Mazza mentioned that her response to seeing friends is an overwhelming amount of positive energy.  She will shout her friends’ names and sometimes flap her arms up and down. She explained these actions by saying, “It’s just my way of releasing all the energy that’s inside me.”

Mazza told the panel and the audience about her “sensory overload emergency kit” for times when she thinks that she is having a breakdown. Hers includes pictures and small items that give her joy placed in a fanny pack. She also mentioned that hugs from friends can be extremely helpful during her meltdowns, but she warned, “not everyone on the autism spectrum likes touch.”

Delaney was the final speaker on the panel, and she chose to discuss the question of “How do we engage with students with autism spectrum disorder?”  She recognized that those gathered for the panel discussion included students and faculty, and wanted to provide what she called the “‘best practices’ that can be applied across settings.”

Delaney began by reiterating a point that Dr Kittelberger brought up by saying, “Please remember…the diversity of these students with regards to abilities and challenges…”  Everyone’s strengths and weaknesses are different, and this does apply to people with autism.

For professors, Delaney recommends, “Try to use visuals” and “Encourage students to write things down.”  Another suggestion she made is to provide the students with extra time to process information, as, she said, “They may have auditory processing issues.”

As previously mentioned, organization and priority forming is a common challenge for students with autism. Delaney suggested, “Break things down for them.” Providing typed documents which clearly state expectations and deadlines can be helpful particularly for “teaching time management skills.”

A concern which Mazza chimed in to address is group work in class. She prefers “having the professor assign the groups” to avoid the social anxiety of it.

Delaney provided these pointers for professors, but she explained that many of them can also be used by friends, roommates, club presidents, team captains, etc. of individuals on the autism spectrum. Delaney stated that an essential skill is “learning the signs of when that individual is getting stressed” and learning “what is the trigger for that.” She encouraged being aware of the environment and allowing for down time when it is needed. During socialization, avoid sarcasm, maintain a level tone, be concise, and get to the point.

Delaney closed by listing resources that can help students who live with autism as well as those students’ colleagues and friends. These include but are not limited to advisors, the Academic Advising Office, the Office of Residential Life, Counseling Services, the Center for Career Engagement, and last but not least, Phoenix Rising.

Mazza created the club Phoenix Rising at the end of her sophomore year to provide neurodiverse students on campus a safe space to socialize with peers.  She wanted to create an environment in which individuals could speak freely without social anxieties, and her goal was to also create awareness on campus of neurodiversity.  Mazza hopes to “make it a norm” because, she said, “people aren’t willing to talk about it.”

This panel discussion was a safe and open space in which neurodiversity was talked about, with the goal to give attendees better understanding of the experiences of students with autism and how we can help foster a happy and safe environment for them on campus.