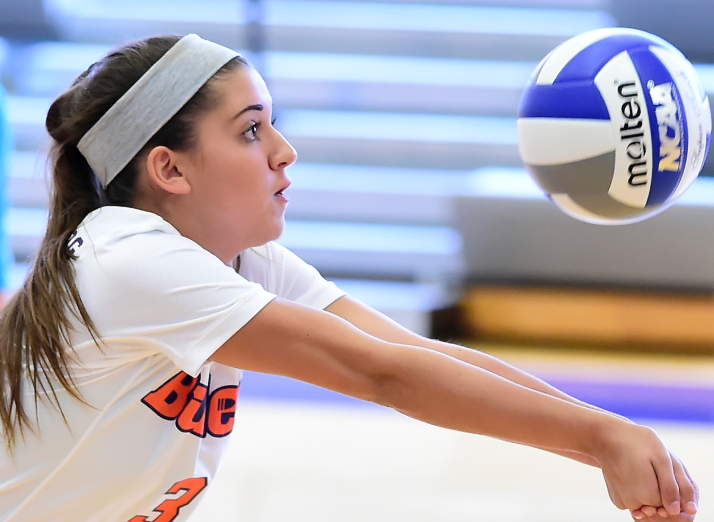 Last Saturday, the Gettysburg Women’s Volleyball Team had a rough day, dropping 3-1 sets to both Haverford College and Stevenson University. However, there was one bright spot with senior Caroline Sequeira becoming only the 20th Bullet ever to join the 1,000-dig club.

“Although the result wasn’t what we were hoping for against Haverford and F&M, the team actually played very well, especially in the F&M match. As a team, we have made a plan to reach certain goals for the rest of the season and F&M was a full execution of the things that we have full control over- attitude, effort and energy – and I think that it will help us do very well against our remaining conference opponents,” said head coach Bernier.

Beginning with Haverford, the Bullets jumped out to an early lead in the first set, taking a 10-4 lead on a block by sophomore Ingrid Bayer. Haverford was able to rally and took a 20-16 lead. It came very close with the Bullet’s retaking the lead 22-20, and eventually winning after sophomore Jordyn Horowitz’s kill from sophomore Sarah Ellis.

In the second set, the Bullets had a tough time scoring. Haverford’s defense played lights out, getting six team blocks in the process. They took and early 12-1 lead and finished the set winning 21-5. The third set was more favorable to the Bullets, taking a 10-7 lead to start the set.

The Bullets fought hard to bring the match to a tie after Haverford took the lead, but the Fords finished on a 5-0 run to win the set. In the final set, both teams saw eleven ties and six lead changes. The Bullets were able to take a 17-11 lead, but Haverford chipped away and took the set and the match.

Gettysburg now owns a 25-14 all-time record against Haverford, winning the last two matches against them.

The final set is where Sequeira recorded her 1,000th dig. She is the first to do it since 2017, where Stephanie Blair ‘18 managed to do the same. She also holds the third best dig average in Gettysburg history with a 3.94.

The Bullets came out to a hot start against Stevenson, easily winning the first set. The Bullets hit .323 and gained fourteen kills. Gettysburg led for most of the set, with freshman Zanze Kuba-McCoy giving the Bullets half of their final four points with kills.

The second set was much tighter, with multiple lead changes throughout. The Bullets gained a lead at 22-21 on a kill by Ellis, but the Mustangs were able to rally and win the set. The third set was also a close one.

Gettysburg led in match in hitting percentage, going .227 versus Stevenson’s .223. This victory improved Stevenson’s all-time record against Gettysburg to 3-2, maintaining their undefeated record on the season, one of only three Division III teams to do so. This was their first match since 2014.

Looking forward, Coach Bernier said, “If we play the same way that we did against F&M, I believe that we have more fire power in the front row than Muhlenberg does. The way that we run our offense gives us 3 attackers in the front row at all times and I don’t think that Muhlenberg’s defense will match up well against us. If we control those key factors- attitude, effort and energy- and play confidently within our fast offense, we should come out on top.”

The Bullets take on Swarthmore next Saturday, Oct. 26 at 1 pm and Johns Hopkins the following Wednesday.