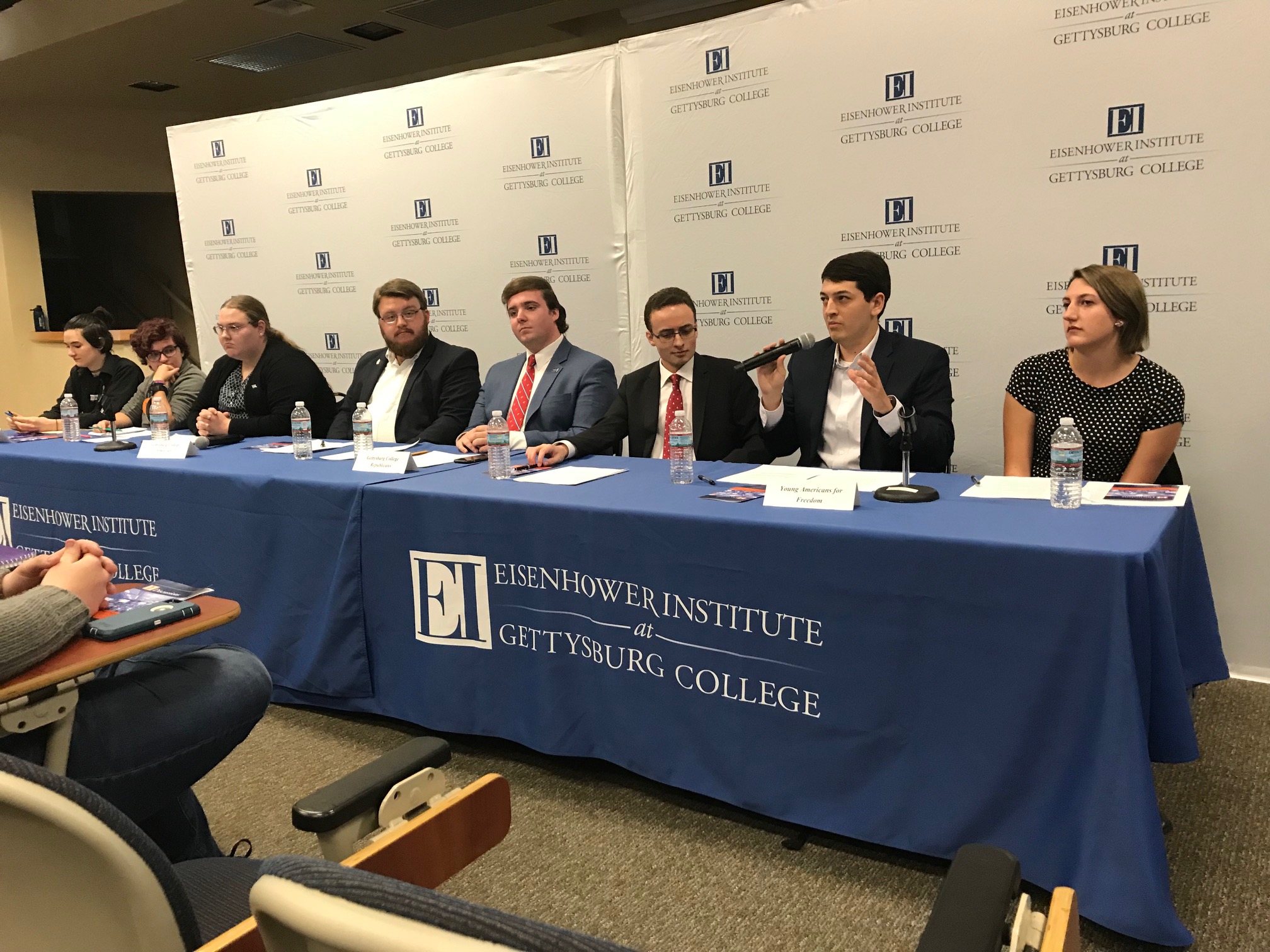 By Carter A. Hanson, Staff Writer

On Thursday, Oct. 17, the Campus Policy Debate in Mara Auditorium featured debaters among some of the political student groups on campus. The Leftist Student Collective, College Democrats, College Republicans, and the Young Americans for Freedom (YAF) debated for an hour and a half on policy issues such as gun control, climate change, data privacy, e-cigarette regulations, and packing the Supreme Court.

“The purpose of tonight’s debate is to foster constructive dialogue that encourages students to become engaged citizens, to educate the campus on political views across the spectrum, to provide an opportunity to compare and contrast political views of different campus organizations, and to continue to promote ongoing conversations,” Abigail Hauer ‘21 said. She is a member of the Public Policy Student Council, which organized the event along with the Public Policy House, the Political Science Department, and the Eisenhower Institute.

The debate began with one-minute opening statements from each of the four political groups; the groups briefly outlined their political agenda, core policies, and explained how members of the audience could get involved.

“We agree that proposals on the left for mass gun confiscation and the targeting of religious institutions because of their beliefs are flat-out wrong,” YAF representative Nick Arbaugh ‘20 said, framing the group’s stance for the debate.

“We agree that proposals to transfer billions of dollars between racial groups are pseudo moralistic nonsense motivated by vengeance and political opportunism,” Arbaugh continued. “And we agree with the Russian writer Alexander Solzhenitsyn that socialism of any type leads to a total destruction of the human spirit and to a leveling of mankind into death.”

YAF was the farthest right club ideologically on stage on Thursday, aligning themselves politically with the Republican Party, as they based much of their platform being anti-gun control, anti-impeachment, fervently capitalistic and anti-socialist.

However, YAF did decisively break with the GOP with their support for trust-busting and recognition of the realities of climate change.

The College Republicans echoed much of what YAF supported, but disagreed with their national party counterparts on a few critical points such as their recognizing climate change and support for breaking up big tech companies. Additionally, the delivery of their platform was much more moderate, offering an alternative for the center-right.

“Recurring themes of tonight’s debate responses will place importance on American national security and the preservation of liberties in the United States according to the American tradition, while still preserving the [sic] safe and healthy society,” College Republicans President Zachary Sobeck ‘20 said. “The Republican Party is committed to strengthening our nation by keeping Americans secure and pursuing an America first foreign policy.”

The College Democrats, similar to the College Republicans, stuck to the party line and focused on appealing to the ideological center, rather than the left-wing periphery of the party.

“We, of course, are aligned with the Democratic Party. I’m sure you’re all aware of our very contentious primary that’s going on right now—we’re trying to figure out what we want to put forward against the Republicans coming up,” Adams County Democratic Committee liaison for the College Democrats Brendan Salyards ‘20 said. “We have a wide array of beliefs across the spectrum in our club and we like to engage with one another and find common ground.”

Because of the fractured nature of the ongoing Democratic primary, there is no unified political platform. This gave the club a certain degree of policy leeway that the College Republicans weren’t able to enjoy.

Finally, the Leftist Student Collective (LSC) argued for a wide range of policies, presenting a slate of political positions that were generally not as unified as their Republican or Democratic opponents. This is due to their status as a coalition: they do not claim in any regard to having one central policy directive, instead of representing an array of leftist ideas.

“[The Leftist Student Collective] is a club that tries to represent anyone on campus that is left of the Dems. So most of our members have the common sense to be anti-capitalist, but aside from that, most everything that I will be saying tonight are my own opinions,” LSC President Randy Feeley ‘21 said.

The club members established themselves as generally anti-capitalist, civil rights-oriented, and anti-establishment. Their message was completely different than anything College Democrats, College Republicans, or YAF argued during the debate.

A critical point during the debate came when the issue of transgender rights was brought up in the context of a pending Supreme Court case about whether the Civil Rights Act ought to be interpreted to protect from discrimination on the basis of gender identity. YAF initially voiced their support for transgender rights, which would be significant for a right-wing political organization, but when the conversation focused on specific policies that would advance trans rights, YAF balked, particularly at the idea that such rights could be enacted by courts rather than elected representatives.

“Will all transgender individuals be allowed to use any bathroom of their choosing, thereby ruining the privacy of young girls and women—even in religious schools?” Alexa Secrest ‘20, one of the representatives of YAF, said.

“Will Christian cake decorators who believe in the biological definitions of sex be forced to baked cakes celebrating transgender clients transition?” she continued. “Will families that suggest therapy instead of surgery as a solution to their children’s dysphoria have their kids taken away?”

Lars Healy ‘20, from the Leftist Student Coalition, said in response: “The comfort of women and children in bathrooms always comes up but nobody has ever been asking us before, during, or after this process if trans people have been uncomfortable the whole time—in bathrooms or just, like, anywhere. We’re right here on this stage when we’re talking about this.”

The entire political spectrum on the debate stage seemed to agree on climate change, a departure from the national political environment. The College Democrats proposed a massive hybrid government-free market solution, placing an emphasis on overhauling American infrastructure around energy efficiency and environmentalism.

The College Republicans, similar to YAF, recognized climate change as a problem, but urged more moderate changes, like the expansion of nuclear power.

“As the pioneer of environmentalism a century ago, Republicans understand the need to be good stewards of our natural resources,” College Republicans Vice President Wellington Baumann ‘20 said.

All four of the political clubs that participated in Thursday night’s debate expressed their political opinions and explained their policy proposals. Though discussion became contentious occasionally, there was a great deal of agreement throughout the night, and there were few heated exchanges, even between groups that disagreed the most.

Professor Chas Phillips, who moderated the debate, said “I think they remind us that we have healthy disagreements that can be discussed and that’s always a part of the liberal arts project, so I think it’s good to come out and enjoy it in an environment that’s not the classroom.”

Editor’s Note: This article was updated at 10:25 p.m. on Tuesday, Oct. 22 to provide more information about the question that gave rise to a conversation about transgender rights. (~P. Doscher)