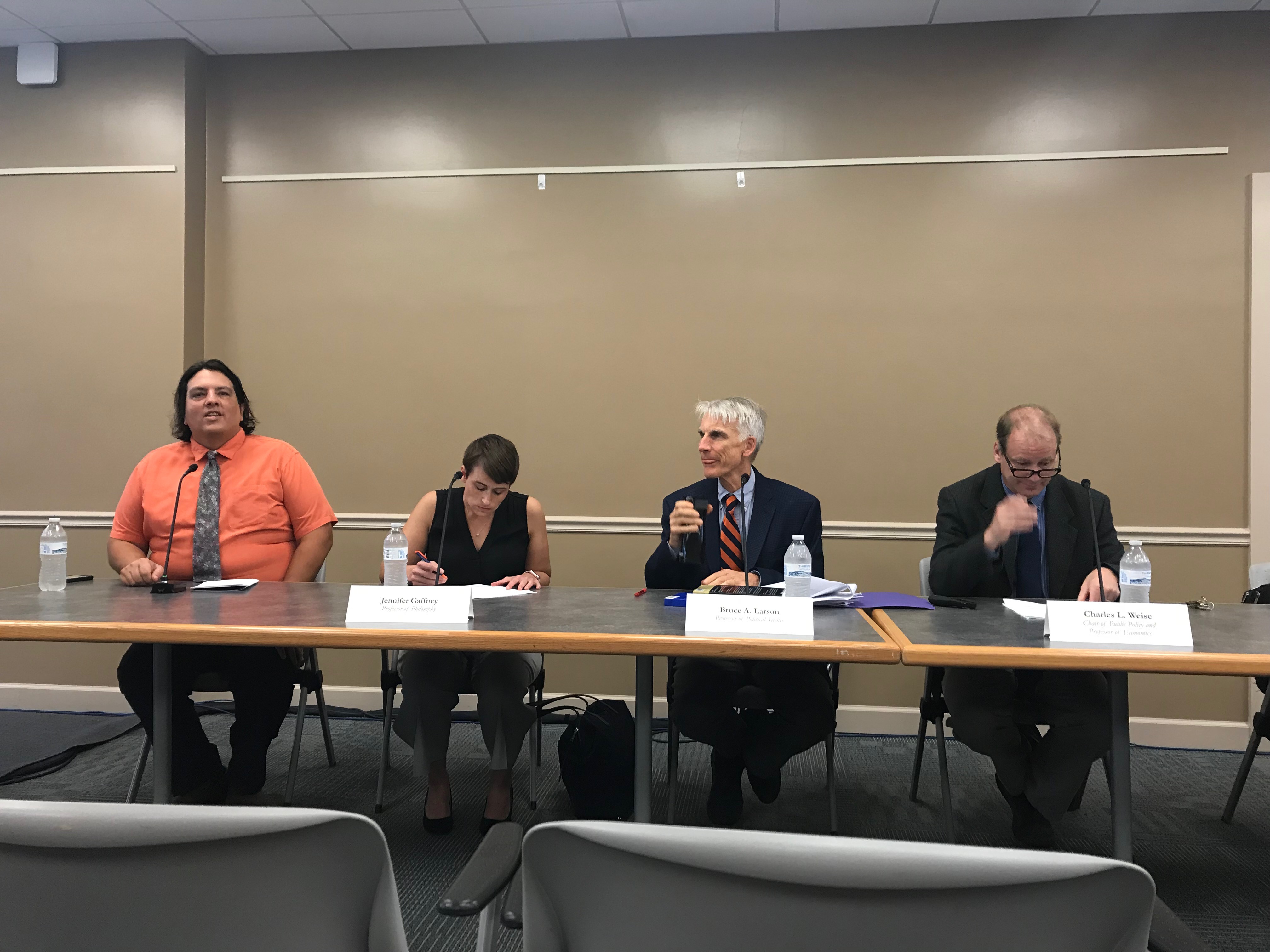 Professors from the Departments of Environmental Studies and Psychology presented interdisciplinary research on climate change.

Students worked with Environmental Studies Professor Sarah Principato to study the effects of virtual placement attachment and film on climate change awareness. She reported that of her students, Dori Gorcyzca ‘15 and Brittany Bondi ‘19, completed honor theses that included websites to increase climate awareness and concern and, for Bondi, a documentary viewing. Surveys from both studies found that supplemental information and an emotional attachment to the places portrayed virtually increased participants’ climate change concerns.

Professor and Chair of Environmental Studies Salma Monani moderated the panel and shared her research on eco-media studies. She and her students are studying narratives of climate fiction in Indigenous Media (forms of media in which indigenous cultures have creative control). She hopes that elements of audience outreach in the media and an emphasis on imagination, as told in indigenous narratives that portray resiliency and adaptability, will help mark new governmental climate change policy.

Lastly, Psychology Professor Christopher Barlett shared the results from a study of the effect of hot temperatures on aggressive behavior and violence. He noted a chain reaction caused by rising average temperatures on subsequently increasing homicide rates. He hopes, like Monani, that his studies may encourage the government to think about climate change policies.

The panel ended with a question and answer session, in which multiple audience members questioned how students, faculty, staff, and administration are working to improve sustainability efforts at Gettysburg College. While all three panelists are hopeful in the strides they’re making along with their students, they welcomed the efforts of alumni and other faculty, including Professor of English William Lane, who is including a sustainability action plan presentation as part of one of his courses.

Faculty dove into the leadership experiences, styles, and stories from President Dwight Eisenhower in the Leadership Lessons from Eisenhower inauguration weekend panel.

As Eisenhower had a significant enough impact on the Gettysburg campus to create the Eisenhower Institute and newly announced scholarship in his name, it seemed most applicable to look towards his time as a general and president to advise the future leaders of America.

History Professor Michael Birkner, who has taught at Gettysburg for thirty years, had specifically focused his past studies on Eisenhower. He made it clear that Eisenhower did not do everything he could to improve the rights and civil liberties of women or people of color in America, but he did say that Eisenhower wrote, “a living democracy needs to have diversities brought together in a common purpose.” This was evident in his push to work with more women in government.

Public Policy Professor Anne Douds continued, saying Eisenhower “appointed more women to high-level positions than any other president before him.” She later explained how Eisenhower, while not a “raging feminist” was “open-minded” and listened to his female constituents. She asserted that this was a great reason for having the Women in Leadership program be part of the Eisenhower Institute.

All in all, the panel provided new insights into Eisenhower and his leadership, from his negotiations to methods of working with others.

Economics, Politics, and Citizenship in the Trump Years

An inauguration panel evaluated Donald Trump-era economics, politics, and citizenship through the perspectives of an economist, a political scientist, and a philosopher. The panel explained how the three were intertwined into society, and how, when one fails, the others are affected.

When policies focus on appealing to the top 20 percent of the country, according to Chair of Public Policy and Economics Professor Charles Weise, the bottom 80 percent look towards politicians who can work for the majority and work towards their interests.

“What a world it once was where there was money to be made building houses for the middle class.” Weise said.

He delved into voters’ appeal towards candidates like Trump: “Things like the representation of workers in unions… things like affordable college education, things like affordable healthcare, these things that really matter to the lives of the bottom 80 percent,” Weise said. “People look for the anti-system candidate when the system in this analysis is operating against their interest.”

Philosophy Professor Jennifer Gaffney referred to political philosopher Hannah Arent to help explain the rise of right-wing populism. She speaks on the idea of loneliness, despite the multitude of opportunities to communicate with modern technology and transportation.

Gaffney quoted Arendt, saying loneliness “makes human beings willing to surrender their humanity to the delusional fellowship promised by totalitarianism.” She follows that with the promise that she does not believe America is nearing totalitarianism or had elected the next Hitler, simply that Americans are looking for unity from their government.

“I’m going to plant a seed of doubt.” Bruce A. Larson, Professor of Political Science, explained that racial biases were actually more consequential in the 2016 election than financial or economic worries. As a specialist in American political institutions and processes, he stated that everyone should question these claims and beliefs, especially their own.