A Cappella Groups Join Together for Second Annual Acatoberfest 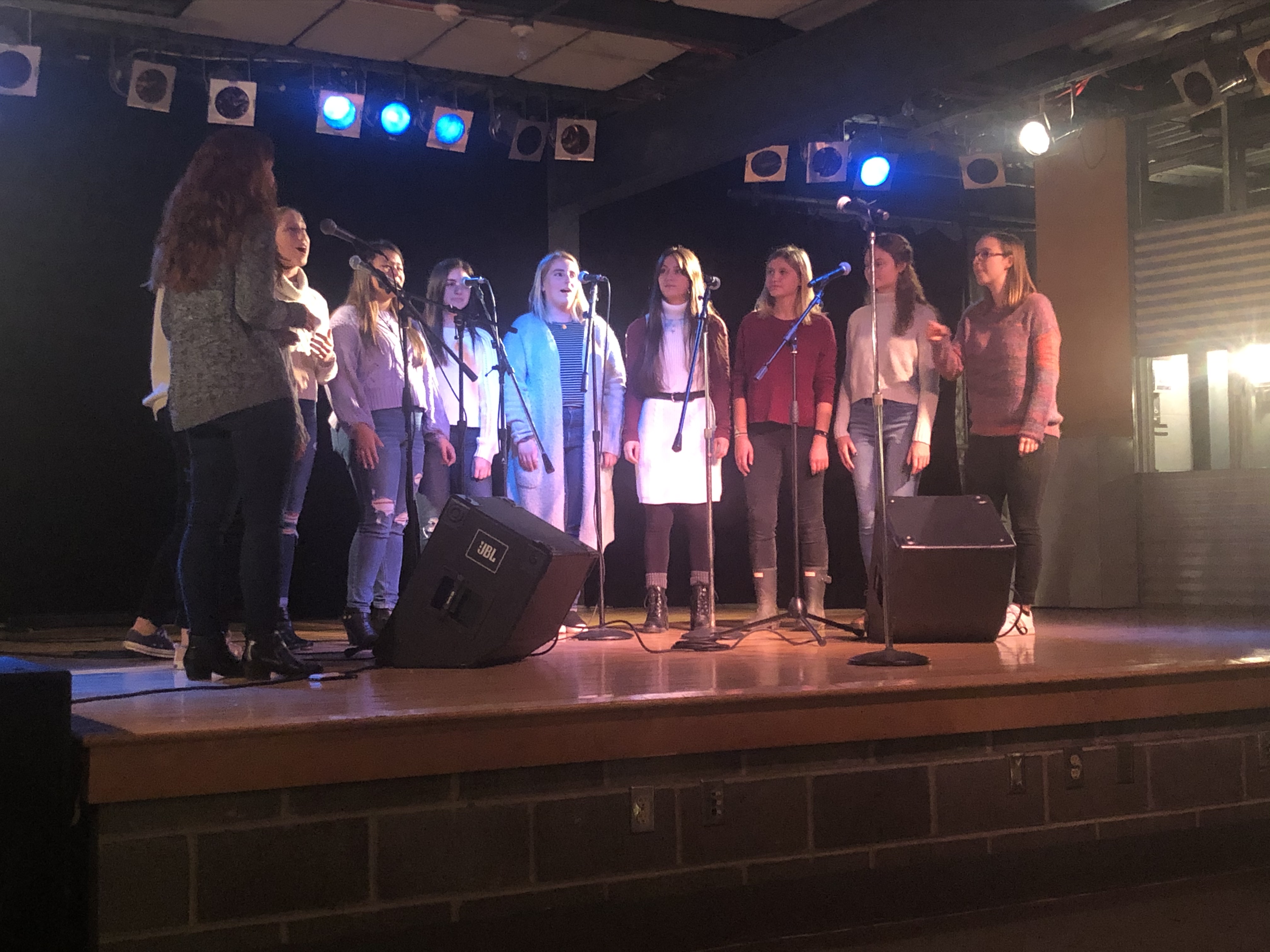 On Friday, October 18th, all four of Gettysburg College’s distinct a cappella groups gathered to perform for the campus community in the Attic for the second annual Acatoberfest.

The Attic was filled with a cappella fans, friends, and family from 7 p.m. until 9 p.m.  This was a host provider event, which also included snacks such as Halloween Oreos, provided by a member of the Spark Notes, Colleen Dilello ‘22.

Each group performed three arrangements on the Attic stage, and they were distinguished by their unique outfits for the night. Upscale decided to go for a cute and cozy look by wearing coordinating sweaters, Drop the Octave stuck to their classic roots by wearing suit jackets, the Spark Notes donned black tops and various costume headpieces for each member, such as cat ears and unicorn horns while Bridget Haines ‘21 wore her signature sunnies, and Four Scores honored the tried and true business casual look.

The night began with an opening set from Upscale.  They performed the traditional Upscale medley which was arranged by a former music professor, “Royals” by Lorde, and “Happier” by Marsmello and Bastille.  Before the show, Upscale President Olivia Chatowsky ‘21 admitted to being “very nervous” about opening the concert, but she maintained a positive energy throughout, as her distinct laughter was heard and admired by all.

Drop the Octave (DTO) made a “comeback” — as noted by the singers — beginning their set with what the president of DTO, Thomas Gilman ‘22 dubbed “a banger:” The opening of “I Will Always Love You” by Whitney Houston into Rick Astley’s “Never Gonna Give You Up.”  They continued with “Sunday Morning” by Maroon 5, and ended with a classic piece: “Good Old A Cappella.”

The Spark Notes were particularly well-received by the audience as they took the stage. They were the only group to never use the middle soloist microphone, opting instead to share solo parts and maintain the quintessential a cappella half circle throughout the set. The Spark Notes made sure to open their Acatoberfest set with their well-known arrangement of “Come and Get Your Love” by Redbone. Their second piece was a Post Malone medley, and they ended on a high note with a solo by Dilello to close “Sucker” by the Jonas Brothers, which featured a kazoo solo performed by beatboxer Bridget Haines.

The night ended with the largest a cappella group, Four Scores. Their set included pieces arranged by president, Austin Nikirk ‘20 and member Ryan DeStefano ‘21.  Beginning with a mash-up of “Stay” by Rihanna and “Unsteady” by X Ambassadors, they had the audience in awe of their soloists for all three of their pieces. Next, they sang one of the only songs of the night that paid homage to the October theme: “She Wolf” by Shakira. Finally, Four Scores closed the night with “September” by Earth, Wind and Fire, to which the audience enthusiastically clapped along.  The soloist for this piece, Sebastian Garcia ‘23, received high praise for his performance.

At the end of the night, Spark Notes President Lauren Hand ‘20 and member Colleen Dilello ‘22, were both glowing with pride over the performances of their group and their peers.

“I think every group did a really great job. As for the Spark Notes, everyone was confident in what they were singing, which makes a big difference,” Dilello said.

Hand also commented, “The Spark Notes had so much fun performing and collaborating with Upscale, DTO, and Four Scores.”

Austin Nikirk ‘20, president of Four Scores, had a similar response: “The concert was really fun, and it was cool to see what all the groups are working on right now!”

Acatoberfest proved to be a successful night for all of the a cappella groups who performed, as they — along with the campus community — continue to encourage each other the spirit of music and fun.