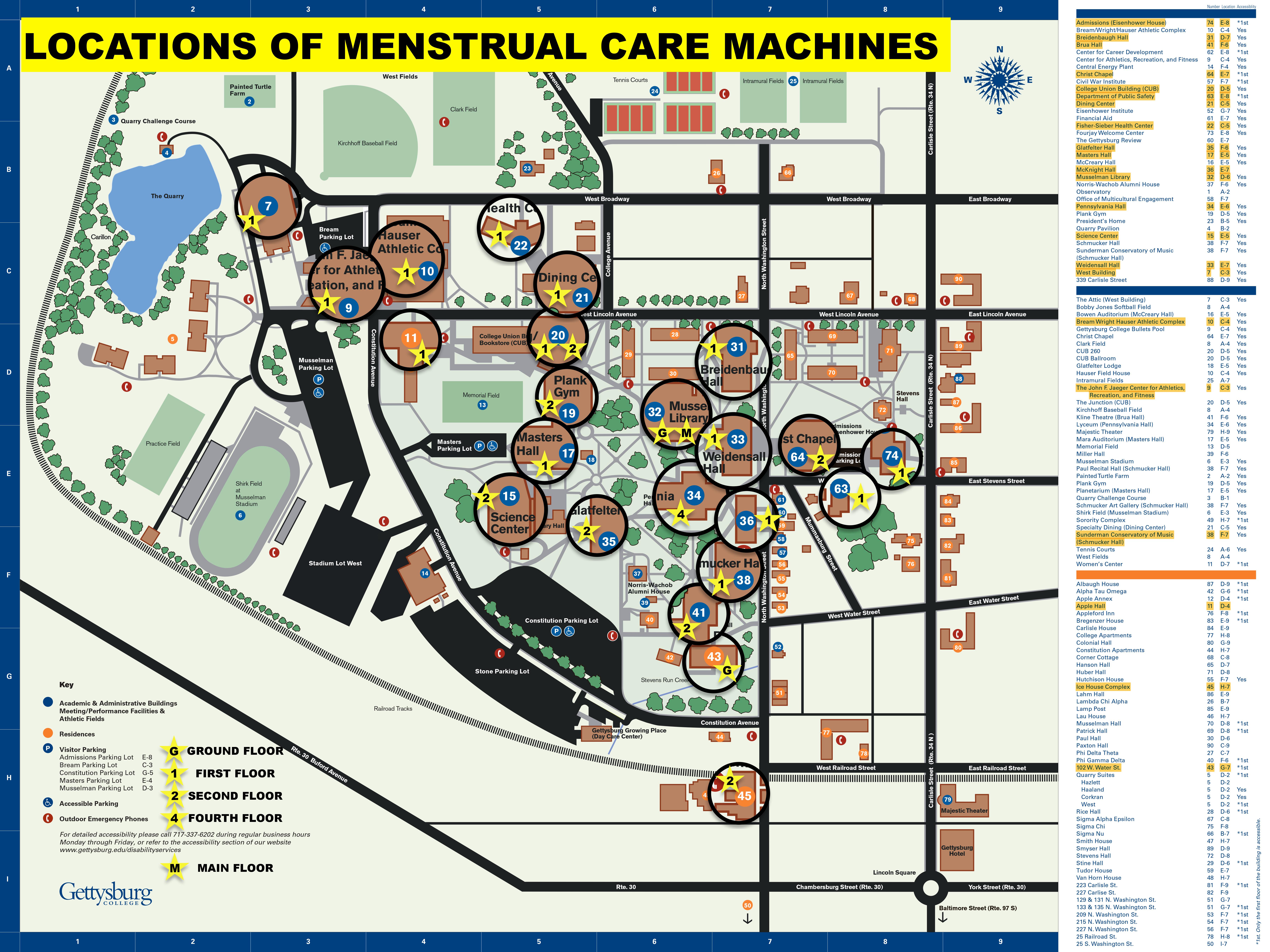 Building locations and floors of the menstrual care product machines are indicated on the map (Map courtesy of Gettysburg College).

This past year Gettysburg College Student Senate and the College Life Advisory Committee launched an installation program to make menstrual care products more accessible on campus. Through their efforts, nearly 33 dispensers were installed in gender neutral and women’s bathrooms across Gettysburg’s campus.

The movement began in late February when College Life Advisory Committee Chair Rock Swartz ’22 began to advocate for a program that would provide menstrual care products to students. He eventually pushed the idea to Student Senate Opinions Committee. Soon after, the Student Senate passed an opinion stating, in summary, that “menstrual care is a human right and should be provided to our campus community free of charge.”

Once this was accomplished, the opinion was passed down to the floor of the Senate where its implications and strategic options were debated. Specifically, students discussed things such as being more inclusive to the transgender community by calling them menstrual care products instead of feminine hygiene products. Weeks later, a compromise was reached wherein Student Senate would finance roughly half of the start up costs and Facilities would cover leftover expenses and upkeep.

Over the summer, Facilities removed dispensers that dated back to the 1990s. These older dispensers had cost twenty-five cents per product. New machines were then installed in twenty five locations, allowing products to be administered for free and monitored by housekeeping staff.

Students have responded with both negative and positive comments as a result of the new installation.

Jess Greenman ’20 commented on her thoughts of the new program saying, “Its an initiative that reminds me of the Mosaic Cupboard which provides necessities to students who may not be able to afford them. I think both of those are great at making life at Gettysburg more accessible.”

Other students, while supportive of the concept have called for further improvements. One such student, Elizabeth Bishop ’23 stated, “I think they’re very useful to the women but there aren’t enough and they need to be better maintained. If there were more of these across campus and they were maintained better they could have a huge impact on the women in our college community.”

With the completion of the project occurring this past summer, Gettysburg College Student Senate and College Life Advisory Committee continue to make strides for women’s health on campus.