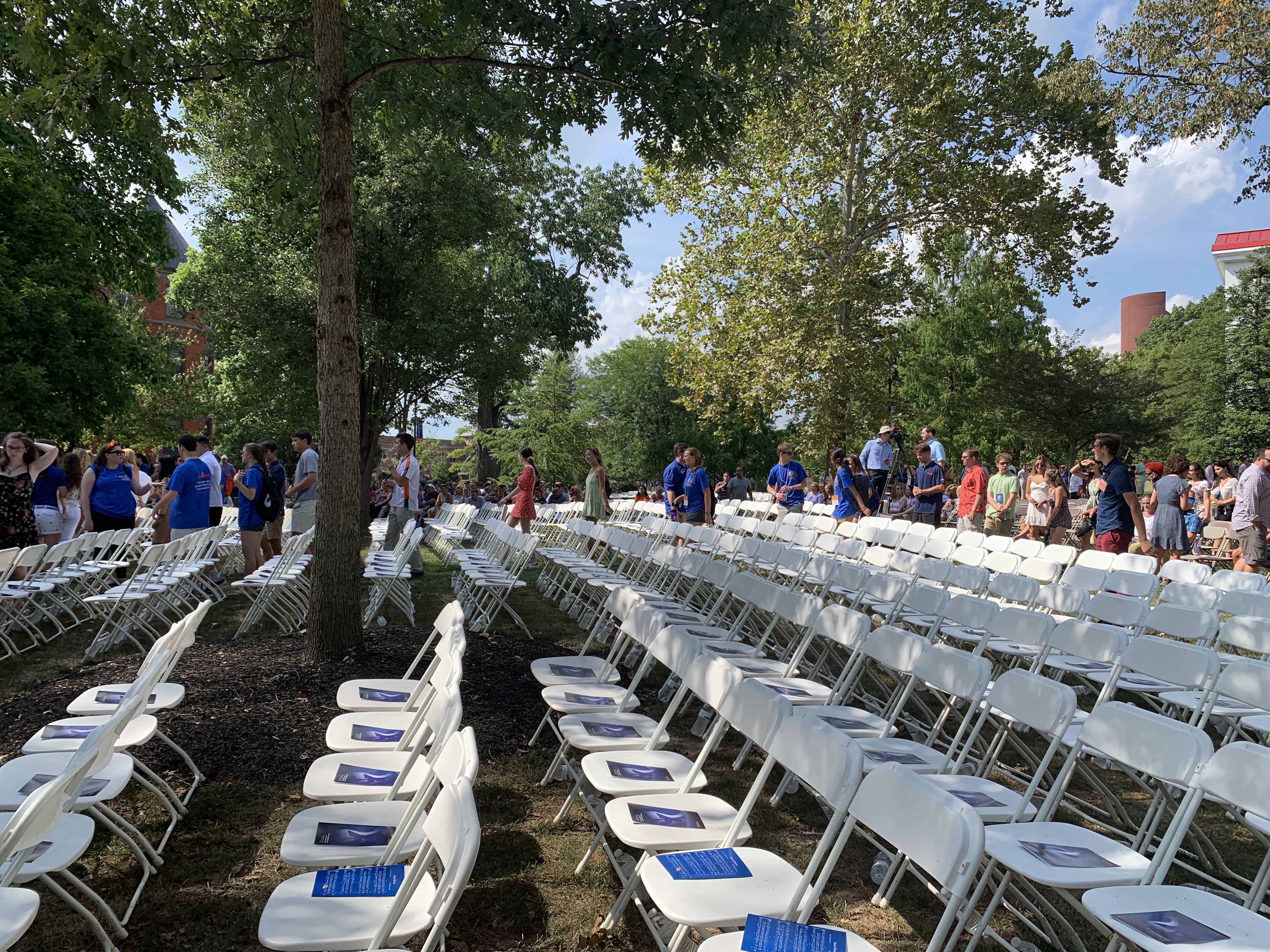 Chairs and programs await the Class of 2023 and their families at the 2019 Opening Convocation ceremony (Photo Nicole DeJacimo/The Gettysburgian).

Families of the incoming first-year class sat among Gettysburg College faculty, students, and staff in a show of resounding support for the Class of 2023 at the Opening Convocation Ceremony on August 21. The first day of Orientation already underway, first-year students officially matriculated into the Gettysburg community by parading through Pennsylvania Hall, greeted by their supporters on the South Side of the building.

The Convocation Band, led by Director of Bands Russ McCutcheon and Director of Marching and Symphony Bands Steven Marx, accompanied the ceremony with jubilant music as a prelude to the event and while the students made their procession.

Due to high temperatures and inclement rain, the ceremony was shortened — skipping over opening remarks from Provost Christopher Zappe and the Presentation of the Class of 2023 by Dean of Admissions Gail Sweezey — and was held on the shadier South Side of Pennsylvania Hall.

Despite rain showers earlier in the day and brief moments of cloud cover, the weather held off for the entirety of the almost hour-long event.

Professor of History and College Marshal Michael Birkner kicked off Convocation with a welcome and a short Processional, followed by remarks by Associate Dean of Religious & Spiritual Life and College Chaplain Kristin Largen. She encouraged the class to embrace their entrance into the threshold of new college life and said that “It most certainly will be transformative.”

Anne Douds, Assistant Professor of Public Policy, gave the Keynote Address as part of the Faculty Presentation; she mentioned three successful graduates of Gettysburg, listing their accolades and tapping into the infinite potential of the Class of 2023 during their college careers. She advised the class to not feel anxious about the future or by these examples, however, and to “[k]eep learning [..] outside your formal studies; commit to learn something new every day.”

Douds also referenced the Battle of Gettysburg and President Lincoln’s remarks about the significance of being “here.”

“Be here, be present, immerse yourself in this community, and make yourself a full-on, 360, full-sensory learning experience,” she said. “From the ashes of failure rises the phoenix of innovation and creative problem solving.”

The student body was represented by Orientation Coordinator Julianna Pestretto ‘21, who shared a personal experience about a trip to France during which she arrived at the airport hours early for her flight home — accompanied by several other college students — but managed to make the most of her time by exploring the airport with friends and sliding on the slippery floors after a security guard let the students into the closed building. 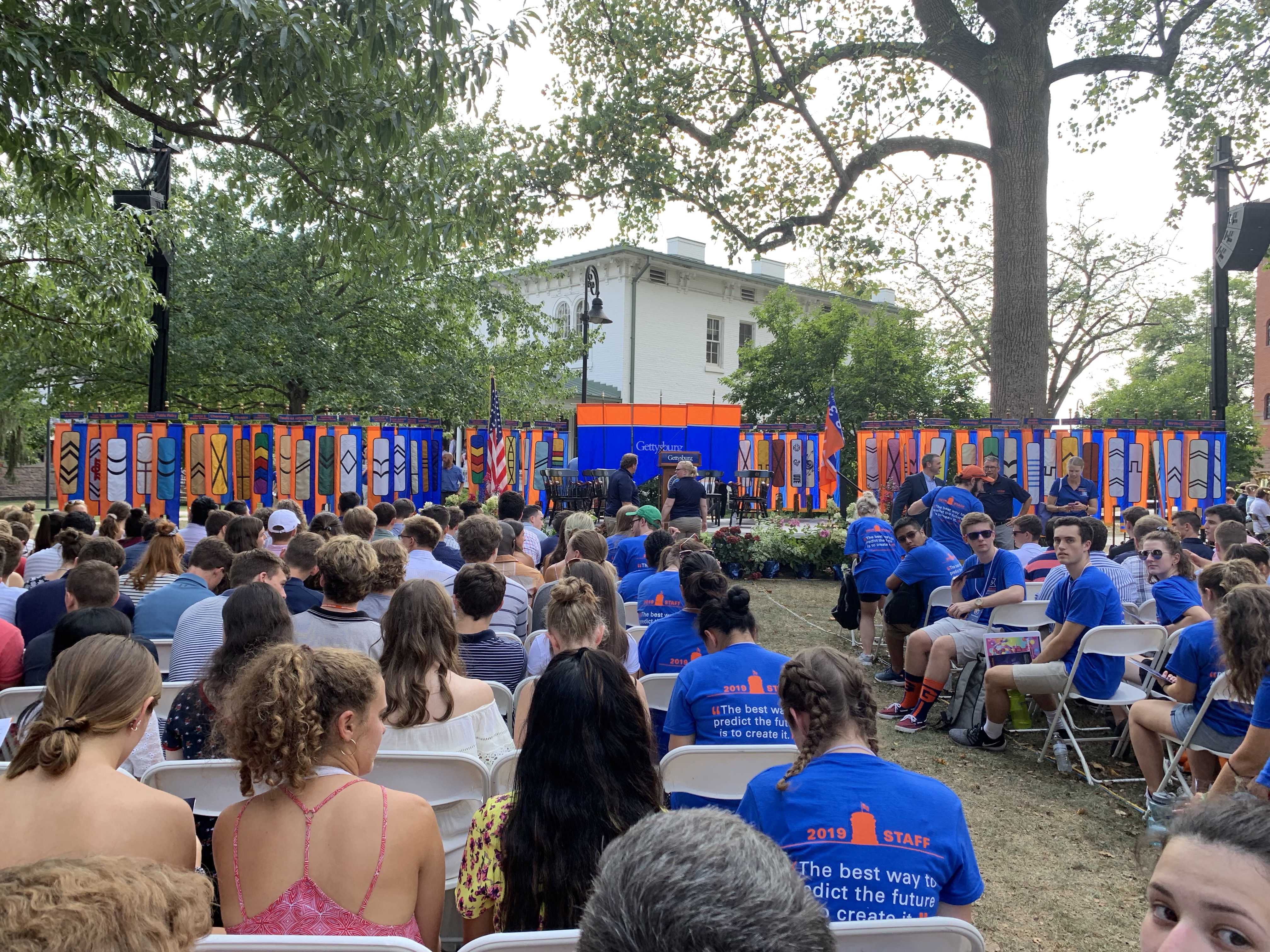 The Class of 2023, families, faculty, staff, and students gathered on the South Side of Pennsylvania Hall for the 2019 Opening Convocation ceremony (Photo Nicole DeJacimo/The Gettysburgian).

“Know that you are not alone and that you will soon find your place among the Gettysburg College community,” she said. “Also know that overtime, college becomes more of a series of those moments of uncertainty, and overtime, it does get easier as you learn to adapt to new situations.”

President Bob Iuliano was next to grace the podium for his first Convocation, similar to the Class of 2023. He reminded the students that the faculty at the College will serve as invaluable resources throughout their college careers, much like President Eisenhower’s relationship with his mentor, Fox Conner.

“You are who you are because of the people who have helped you along the way,” he said. “Be open to mentorship and to all that our exceptional faculty can make possible for you.”

Iuliano noted the “remarkably diverse” class in front of him, and encouraged them all to embrace their differences, considering “diversity is essential to vibrant, educational environment.”

“This college has such a commitment to free speech and the concept that ideas and beliefs are to be challenged, not repressed,” he reminded students.

The final takeaway from Iuliano was to take intellectual risks: “There will be few times in your lives when you are given such broad latitude to explore who you are and what interests you. It would be easy to play it safe — to focus on things you already know you do well — but that would be selling yourself short.”

He ended his remarks by looking for the future, as referenced in the quotes on the back of the Orientation t-shirts. “The future is in your hands, Class of 2023,” Iuliano said. “Let’s create a great future together at Gettysburg College.”

After, students placed their class flag pins labeled “23” above their hearts — a sign of membership in the Gettysburg College community. Provost Zappe led the recitation of the Honor Code, in which students pledged to uphold honesty and integrity in their work and relationships throughout their time at Gettysburg.

Liv Duffy ‘22 sang the Alma Mater while attendees followed along with the music provided on the back of their programs.

Largen concluded the ceremony with the Benediction, inspiring students to answer the call to creativity and to commit the best of themselves to visionary work.

The Class of 2023 followed the class flags to the North Side of Penn Hall where they officially marked their entrance into the campus community and exited on the South Side, met by applause and cheers from their family and Gettysburg students, staff, and faculty. 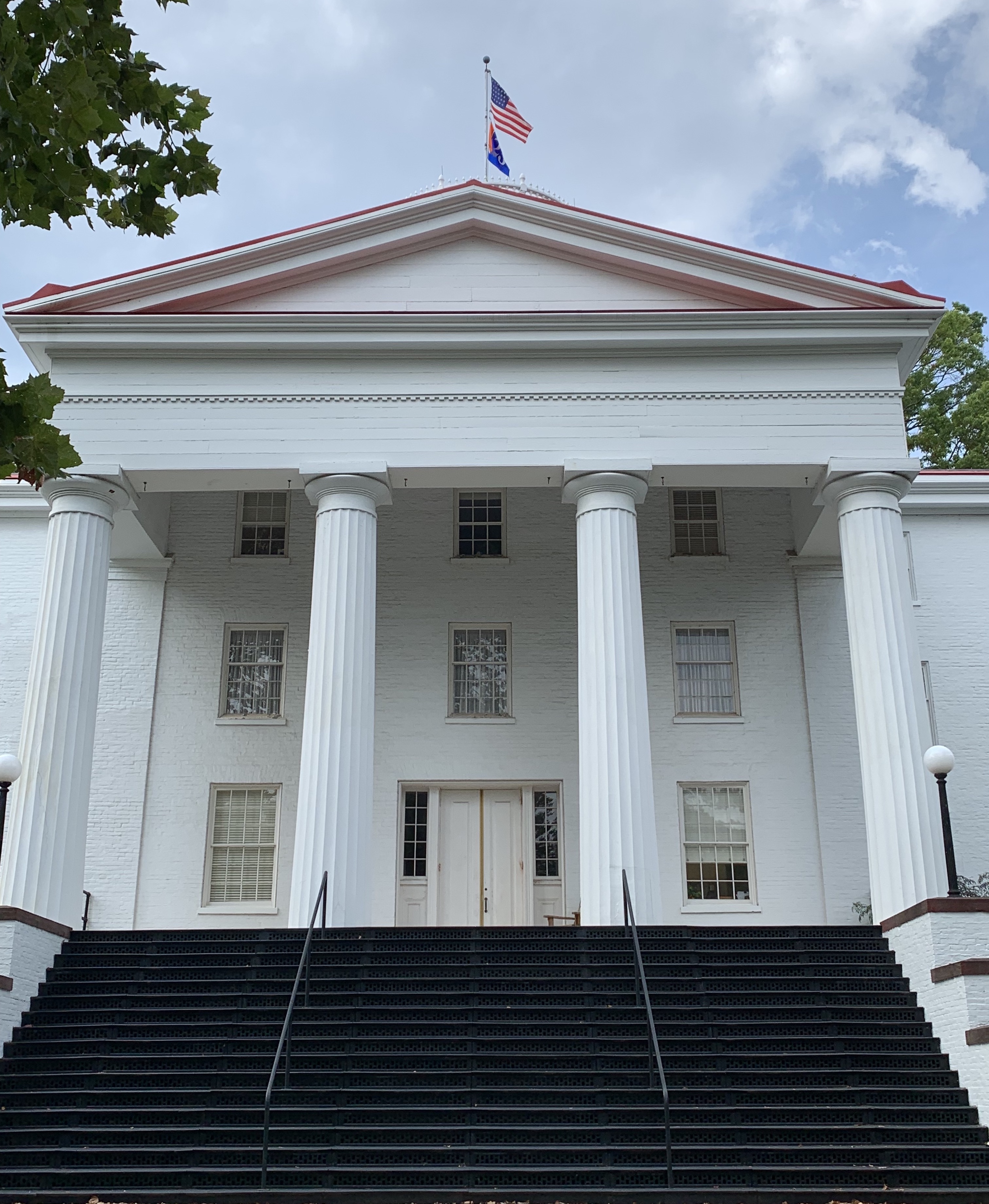 The Class of 2023 walked through Pennsylvania Hall to commemorate the start of their college career at Gettysburg (Photo Nicole DeJacimo/The Gettysburgian).